Representatives of Dartmouth’s three working groups on diversity and inclusivity gathered with students at Fahey Hall Monday night for a public meeting organized by Palaeopitus Senior Society. They discussed a number of ideas, including required classes on race and inclusivity and an examination of how tenure factors into the effort to build a more diverse faculty at Dartmouth. 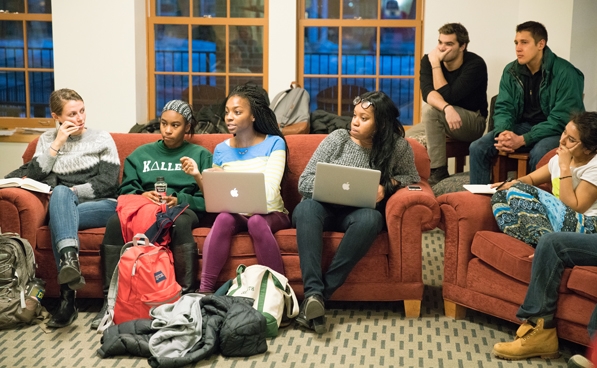 Students discuss diversity and inclusion with the Inclusive Excellence student working group at a town hall meeting in Fahey Hall on Monday. (Photo by Eli Burakian ’00)

“This is a fast process,” said Vice President for Institutional Equity and Diversity Evelynn Ellis, a member of the Inclusive Excellence executive committee tasked with drafting proposals, drawn from the recommendations of three working groups, by the end of spring term.

“At no point should we on the executive committee be in the dark. If you have a wonderful idea or if you disagree, please get involved and let us know,” Ellis told the town hall meeting of about 60 people.

Earlier this month, the College announced the creation of three linked working groups to review existing efforts to foster greater diversity and inclusion among faculty, staff, and students, and to propose ways to improve and assess the work as it progresses.

Since the Initiative for Inclusive Excellence was announced, the staff, faculty, and student working groups received “dozens and dozens” of nominations and self-nominations from members of the community interested in participating, said Dean of the College Rebecca Biron, who chairs the student working group with Vice Provost for Student Affairs Inge-Lise Ameer.  About 12 to 15 students, staff, and faculty members will serve on each committee, Biron said. While the working groups are being kept this size in order to be able to produce concrete recommendations in a timely fashion, everyone who expressed interest will be invited to give feedback in special meetings in the spring.

Following introductions from the group chairs at Monday night’s meeting, moderators from Palaeopitus broke the crowd into smaller groups for separate discussions about staff, faculty, and student diversity and inclusion. 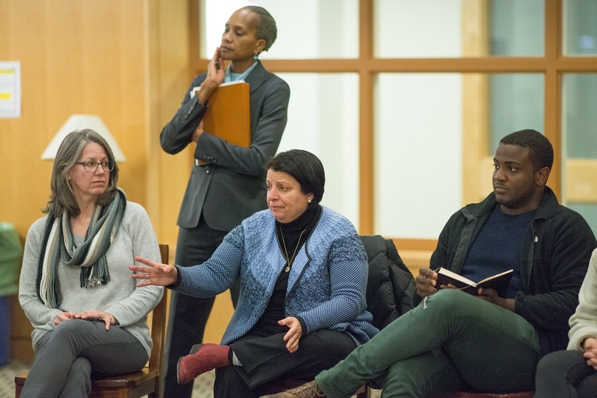 Listening to students during a working group meeting on Monday are, from left, seated, Dean of the College Rebecca Biron and Vice Provost Inge-Lise Ameer, co-chairs of the student diversity working group, and Frank Cunningham ’16, student body president, and standing, Vice President for Institutional Equity and Diversity Evelynn Ellis, a member of the Inclusive Excellence executive committee. (Photo by Eli Burakian ’00)

Vice Provost for Academic Initiatives Denise Anthony, chair of the faculty working group, said creating an environment of inclusion for scholars is critical. “We can be successful at recruiting, but unless everyone feels like they are part of the community, they won’t stay, and we won’t be successful.”

Another challenge in recruiting and retaining diverse faculty is finding ways to encourage promising scholars and teachers through the tenure process, she told the faculty break-out group. “All new faculty have challenges and need support, but they also bring distinct skills and knowledge to campus. It is important to recognize different strengths, and to provide various kinds of support and mentoring for faculty across all groups, fields, and at all levels,” Anthony said.

Report on Faculty Diversity Is Released

Representing the staff working group, Chief Human Resources Officer Scot Bemis said that retaining employees from underrepresented groups can be more challenging than recruiting them. One way to address this is to build stronger networks with minority communities and associations in order to get the word out about Dartmouth as a potential employer, said Bemis.

This summer, for example, Dartmouth will host a national conference of the association of African American Women in Higher Education. The hope is that participants will return home and raise the College’s profile among underrepresented potential employees, Bemis said.

Discussion in the student diversity group quickly turned to the new house community system and how it could be used to promote more diverse and inclusive communities.

Justin Maffett ’16, a member of the student working group, asked how much autonomy students would have in creating social spaces in the new communities that are supportive of people from underrepresented groups.

“This could change the balance of power for, say, queer students who might not feel comfortable in Greek houses,” Maffett said.

Biron said students would have the opportunity to develop programming, define the rules, and set up internal governance systems for the house communities. “If students want to restructure student governance, the house system can foster that, but we have no plans now. We want it to organically develop.”

Jon Diakanwa ’16, president of the Dartmouth chapter of the NAACP, said the conversation was skirting a more difficult topic: racism. He asked if there were plans to develop a curriculum to confront issues of institutional racism and privilege.

The current idea is to build “toward a four-year co-curriculum on diversity issues that would be optional but normed and fun,” responded Biron, comparing it to the current mindfulness and wellness programs. “The message is that learning how to communicate across differences will make your life better.”

Several students at the meeting pointed to the gulf between the perspectives of the participants in the Black Lives Matter demonstration in Baker-Berry Library in November, and those who condemn them, saying it shows how difficult the conversation about race at Dartmouth can be.

“Many here never have to engage, so they don’t,” Diakanwa said. He asked why training in preventing high-risk behavior is mandatory, while classes in understanding racial differences would be optional.

Students will have to advocate for a new curriculum requirement, said Ellis, “It’s not going to happen if you don’t push it.”

Members of the Dartmouth community can offer comment or ask questions of the working groups at the following addresses: