“I am a big ham. I love performing in the spotlight,” says Drayton Harvey ’17.

Eight years ago, Drayton Harvey ’17 was at home in Colorado, watching Dancing With the Stars, when he saw a professional dancer do a flip over his partner’s head. 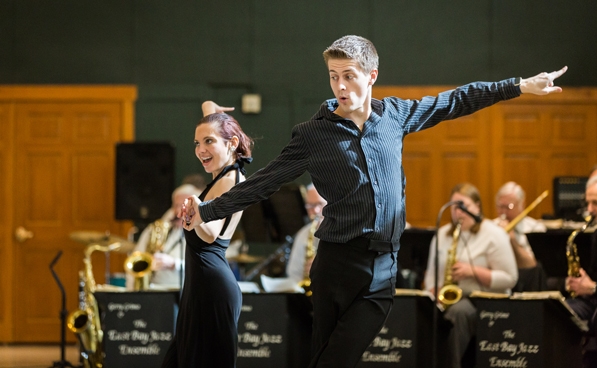 Drayton Harvey ’17 and his wife, Amber Harvey, demonstrate ballroom dancing at a Hopstop family show in Alumni Hall at the Hopkins Center for the Arts on Feb. 27. (Photo by Joshua Renaud ’17)

“I want to do that,” he told his mother, who agreed to pay for lessons. At 13, Harvey fell in love with the grace and athleticism of ballroom dancing. Several years later, he also fell in love with his dance partner.

“I guess you could call it an arranged marriage,” Harvey jokes. When he told his dance coaches he wanted to compete, they started looking for someone whose appearance, height, weight, ability, and level of training would complement Harvey’s. They found Amber Goldsmith—now Amber Harvey. The young couple did well on the ballroom dancing circuit, crisscrossing the nation, first as teenagers, then as adults. “It’s such an intimate sport with a lot of romantic storytelling,” says Harvey.

At first, he wanted a career in ballroom dancing and teaching. But as the high school student fox-trotted from one contest to the next, he also visited colleges and thought more about his academic and career goals. He was interested in promoting good health, and teaching dance to a wide variety of people could have been a path to that goal.

“I totally believe that dance can be very therapeutic,” he says. In fact, a dancer he knows who has cerebral palsy is being studied by researchers investigating the effect dance has had on her motor skills and posture. But Harvey came to realize that for him, performing in ballrooms is an avocation, not a vocation.

“I wanted to have a more direct impact on people’s health,” he says. He’s planning to become a pediatric surgeon.

Harvey could have chosen a school in an urban center like New York or Baltimore, where ballroom dancing is making a comeback. “But I believed I could take dancing anywhere I went,” he says. “I wanted to go to the place that I was most excited about for my premedical career. I chose Dartmouth because of its focus on undergraduates and also the enthusiasm of alumni who interviewed me.”

Communicating Emotion: How Music and Movement Can Make This Happen

On the premed track with a double minor in sociology and biology, Harvey doesn’t have much free time. Still, he and Amber, an events coordinator at Simon Pearce in Quechee, Vt., teach ballroom dance on campus almost every Tuesday night at Sarner Underground in the basement of the Class of 1953 Commons. They also offer occasional classes at the Richard W. Black Community Center in Hanover and the Hopkins Center for the Arts Hopstop Programs.

Harvey says ballroom dancing is not as popular in the Upper Valley as in some parts of the country, but he’s finding lots of converts, even among people who say they have two left feet. He loves hearing courtship stories from older couples who fell in love watching movie stars like Fred Astaire and Ginger Rogers kick up their elegantly shod heels, and trying to imitate them on local dance floors.

“No matter how old you are or where you come from, once you get a taste of ballroom, you can easily get hooked,” he says. “There’s such a variety of dances, and there’s such joy, both from dancing and feeling the music and expressing yourself, and also being able to connect with another person.”

Dancing just for fun, Harvey loves jive and hip hop. Competing, he loves foxtrot, “because you don’t have to be connected to your partner at all times, and there’s room for creative choreography.” High-level ballroom contests charge pricey entrance fees, and dazzling costumes aren’t cheap, either. But Drayton and Amber Harvey have not hung up their dancing shoes yet, and hope to get back into competition before too many years go by.

“I am a big ham,” Harvey admits. “I love being in the spotlight.”

Watch a video of the couple performing in 2012 at a ballroom dance showcase at the Cleo Parker Robinson Theatre in Denver.