On March 7, Professor Scot Drysdale was teaching his last class before retirement when two dozen faculty, friends, and family barged into Wilder 104, catching him in mid-sentence and totally disrupting the decorum of “Computer Science 10.” 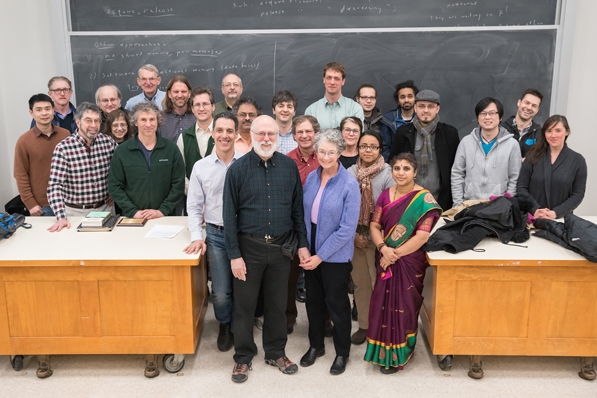 Professor Scot Drysdale was joined by his wife, New Hampshire State Rep. Patricia Higgins, and surrounded by faculty well-wishers at the conclusion of his last lecture. (Photo by Eli Burakian ’00)

As Drysdale’s students looked on in disbelief, his lecture was transformed into a surprise celebration.

David Kotz ’86, Champion International Professor of Computer Science, roasted the retiree. “I took ‘Algorithms’ from Scot 32 years ago,” he said, pulling out his notebook of materials from the course—“and I still have some questions about my grade on problem number four of Homework 8.”

Professor Tom Cormen then put to rest the myth that Drysdale had taught Dartmouth founder Eleazar Wheelock how to program.

Professor Hany Farid, chair of the Department of Computer Science, talked about Drysdale’s long career. “Scot was the first computer scientist hired onto the faculty at Dartmouth in 1978, though at the time there was just the math department,” he said. “It later became math and computer science and then, in 1994, computer science became its own department.

“When I came to Dartmouth, Scot was the chairman of the department,” said Farid. “Scot’s term as chair laid the foundation for the department as it is today. Now I am following in his footsteps as chair, but he made my job easier by setting a tone of collegiality, mutual respect, and commitment to teaching and research that still persists in the department.”

He then presented Drysdale with a plaque “on behalf of all in honor of Scot’s 38 years of service.”

Drysdale kept his own remarks brief. “It is customary to say something at this point,” he said, “but all I can say is thank you.”

The impromptu visitors posed for group photos and then filed out, still smiling, leaving Drysdale’s last lecture in a state of jovial disarray.