Read the full story by Michael Blanding, published by Thayer School of Engineering.

Inside each of our bodies is an arsenal of defenders just waiting for the right attacker to show up. Our front-line troops are legions of T cells, white blood cells on patrol looking for cells that are infected with foreign pathogens, binding to them, and killing them. Behind the lines, other blood cells called B cells produce antibodies, proteins that bind to foreign invaders and either neutralize them or act as a beacon to recruit other immune cells to come and attack. 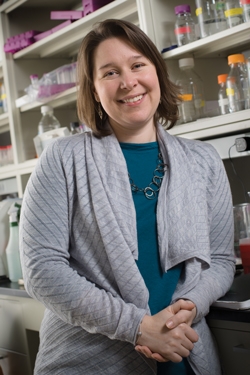 “If your immune system can’t naturally induce a protective response, then building a vaccine to do so is a fundamentally more challenging goal,” says Assistant Professor of Engineering Margaret Ackerman. (Photo by John Sherman)

Our bodies have millions of these B cells, each producing its own unique antibodies, which together are capable of recognizing any infection we might encounter. “Protein engineers would call this a library,” says Margaret Ackerman, an assistant professor of engineering at Thayer School of Engineering. “Any time you are infected, your immune system samples thousands of different antibody proteins and identifies those that bind best to the target pathogen.”

While the body is capable of doing this by itself in response to most infections, scientists have found a way to jumpstart the process with vaccines to help the body sort through its own vast libraries in order to produce the right antibodies to fight off invaders it has yet to see. That’s done by using a weakened, inactive, or dead form of a pathogen or sometimes by using unique protein components, or antigens, from pathogens.

“By exposing your T cells and B cells to weak, dead, or component antigens of a pathogen, they can learn to recognize a real infection,” says Ackerman.

Once exposed, the body maintains populations of T cells and antibodies, each with specific orders to seek out and destroy a specific virus or bacteria. The system works incredibly well—until it doesn’t. While most foreign invaders spur this natural response in the body, some diseases fail to muster the right troops in our bloodstream. In the cases of flu and malaria, for example, the pathogens are so variable, with so many unique strains, that the body can’t know in advance what will hit it—or in the case of flu, an annual vaccine is needed to help battle each year’s particular strain.

Then there are other diseases, like HIV, the virus that causes AIDS, which just seem to thwart the body’s natural immune response. For reasons scientists don’t completely understand, the body’s white blood cells seem helpless in the face of HIV’s attack, failing to generate the right T cells and antibodies to effectively target the disease. And if the body can’t do it on its own, that makes traditional ways of developing immunity through vaccination more problematic.

“If your immune system can’t naturally induce a protective response, then building a vaccine to do so is a fundamentally more challenging goal,” says Ackerman, who has dedicated her lab to achieving exactly that goal.

In combination with a team of collaborators, her research group’s secret weapon is a unique platform to evaluate antibodies in much greater detail than has been possible previously, which is then coupled to complex computer algorithms to determine how best to make vaccines better.

“It’s sort of looking under the hood of your immune system,” Ackerman says. “We are looking at the thousands of different variants of antibodies your B cells have produced in response to vaccination and weeding through that data to learn the features of potent immune responses in order make better vaccines.” Using these techniques, her research may contribute in the not-too-distant future to one of the holy grails in modern medicine—a vaccine that could provide immunity against HIV.