The end of winter term brought show-and-tell night for students collaborating on projects for the Digital Arts Leadership and Innovation Lab, or DALI. At a March 9 open house on the top floor of the Hopkins Center for the Arts, teams displayed digital work in progress and explained how they are meeting challenges presented by real-world clients seeking innovative technology. 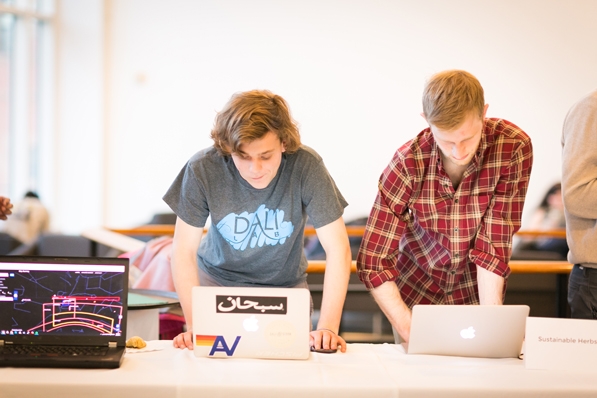 Nicholas Golini ’17, left, and Robert Neuhaus ’16 prepare their exhibits for the DALI showcase. Golini is working on the Sky Survey Map Project, an online database for astronomers, and Neuhaus is working on the Sustainable Herbs Project, which follows medicinal plants through the supply chain of the botanical industry. (Photo by Joshua Renaud ’17)

“DALI is about three years old, and our projects just keep getting more complex and more interesting,” said Technical Director and co-founder Tim Tregubov ’11 MS ’15. There are now about 70 students collaborating on interdisciplinary projects in the DALI lab, and just a small number of them were on display at the Top of the Hop. “When someone brings a project idea to us, we evaluate it,” Tregubov says. “If it’s a good fit for our lab, if it’s educational, and it’s innovative, we get to work.”

One project could change the way Dartmouth students study together. Some would like to meet in small clusters to discuss courses they are taking, but may not know enough people in their classes to form their own groups. BookUp is a mobile app that creates groups randomly. “Log in here,” co-creator John Kotz ’19 says, handing over his cell phone. The name of an academic course appears on the screen. “It anonymously creates a group using only people’s initials, not their names. If you like the group, you can stick with it and use this app to coordinate times to meet. If not, you can try to form another group.” Book-Up is an attempt to promote diversity and encourage students to meet classmates they might not otherwise encounter, Kotz said.

Across the room from BookUp another team is showing off an app called “The Porch.” The social networking tool for indoor rock climbers was proposed by Andrew Palmer ’10, former president of the Dartmouth Outing Club and an avid rock climber. This project taught the site creators to adjust to a changing assignment from their clients. “At first the target was the motivated climber who wanted to document his own progress at gyms,” says Jessica Sun ’18. “But now it’s designed for people who are more social and want to use the app to rate climbing routes in gyms, and tell the gyms and other climbers about their experiences.”

Lined up at another tabletop display, called “Make Stuff,” were newfangled objects created mostly as works of art. These gadgets could have practical applications if further developed. For example, a melody of digital chirps rose from a touchpad with circles drawn on it. This, explained one of the designers, is an alternative to the typical piano keyboard. “The piano wasn’t created with world music in mind,” said Liam Grace-Flood, who is pursuing a bachelor’s of engineering degree through the dual-degree program at Thayer School of Engineering. “It was just designed to please the ears of one particular, western culture.” For people who want to make sounds not possible with the standard 88 keys, “This is a totally different, hexagonal layout. You could play western-sounding music or a completely different scale or style.”

While this globally adaptable instrument may not be coming to music stores any time soon, some DALI projects have already become usable and popular. The John Milton Reading Room, for example, originated at Dartmouth as the brainchild of Thomas Luxon, a professor of English. The exhaustive website containing all of Milton’s fully annotated poetry in English, Latin, and Greek, along with prose selections, was redesigned and upgraded by DALI. Tregubov says it gets about 65,000 hits a day on the Internet.

Another promising mobile app still in development targets dieters who want to curb their appetites, prompting them to think twice before they reach for calories they could easily do without. “It’s going through testing right now,” Tregubov says, “and it would be a way to conduct psychological research, as well as help people improve how they eat.”