As Robert Frost’s birthday nears—he was born on March 26, 1874—students from Karolina Kawiaka’s drawing class have been taking a path “less traveled,” to borrow the poet’s phrase, up a steep hill on campus to quiet spot near Bartlett Tower. They are making the pilgrimage not just to honor Frost, but to draw him, creating submissions for an art contest launched this year by the Class of 1961, which donated the statue to the College 20 years ago. 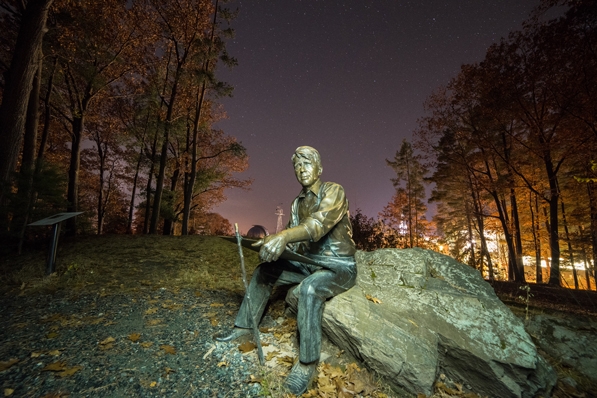 Night falls on the statue of Robert Frost near Bartlett Tower in the College Park. (Photo by Eli Burakian ’00)

There, on a rock, sits the poet, immortalized in bronze. Using a makeshift desk—a board on a stick—he’s writing, “Something there is that doesn’t love a wall,” the first line of the famous poem “Mending Wall.” Seen from a distance, the sculpture seems uncannily lifelike. 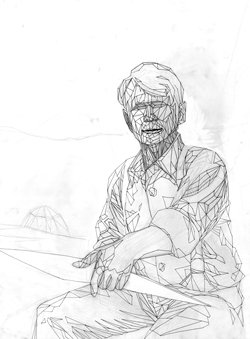 Frost himself might actually have lingered on this knoll.  He entered Dartmouth in 1892, but left after only a few months. As an accomplished poet, he returned to campus several times over the years, giving readings and lectures. Rauner Special Collections Library holds a large collection of his papers. In 1996, the Class of ’61 commissioned its tribute to a writer who had left a lasting impression when they were in college.“We wanted to enhance the connection between the talented and famous poet and Dartmouth College, which granted him an honorary degree in 1955,” says Victor Rich, Class of ’61. Rich, who was class president when the idea of donating the sculpture was first conceived, says the Frost figure was the first piece of public art on campus, and remains the only one depicting a human being.

It fell to Rich’s successor as class president, Arthur Kelton, Class of ’61, and Michael Murphy, chair of the Robert Frost statue class project, to do most of the legwork for the $50,000 gift. Murphy worked closely with Colorado sculptor George Lundeen to come up with the design. “Members of the English department begged us,” Murphy recalls, saying, “ ‘Please don’t do Frost as you and your classmates remember him,’ which was the quite old white-haired guy who came up to Dartmouth several times when we were students. ‘Portray him as the very young farmer in Derry, because that’s when he wrote most of his great poetry.’ ”

The problem was, Murphy says, few would recognize the young New Hampshire farmer as the famous poet he would become. So Lundeen took artistic license, “and gave us the face of an older Frost, but the body of a young vigorous farmer.”

Lundeen did extensive research for the Dartmouth commission. In Rauner, he found many photographs of the poet. “I also went to one of Frost’s homes, in Derry,” Lundeen says, “and there was a board attached to a stick, and I thought, he would have taken that to the woods to use as a desk.” To make sure he had the exact proportions for Frost’s body, Lundeen contacted fellow sculptor Walker Hancock, who gave him Frost’s measurements for a bust he had created.

Drawing Frost’s face for the Class of ’61 contest, Jessica Sun ’18 is taking an abstract approach, reminiscent of cubism. “I started out trying to simply capture Frost realistically, but I experimented with breaking him up into these shapes and really liked the result,” she says. Sun went to the Robert Frost Middle School in Rockville, Md., and has read and enjoyed Frost’s most famous poems. 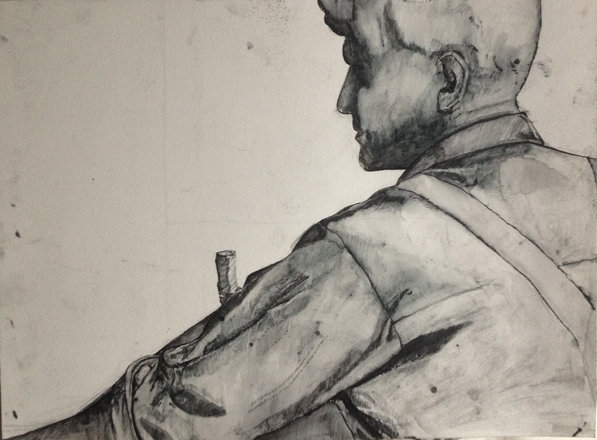 For her submission to the Robert Frost statue contest, Ruby Hopkins ’17 shares the viewpoint of the poet looking out from his scenic spot on the Dartmouth campus. (Image courtesy of Ruby Hopkins)

Ruby Hopkins ’17 is working on a more realistic depiction, using pen and ink and soluble graphite. “I decided to show the view of Frost over his shoulder because I wanted to get a drawing that left space for him to be reflective, which is my sense of the mood of the statue,” Hopkins explains.

Studio art department faculty are hoping to see submissions in other media, besides drawing, before the April 18 deadline. Any undergraduate or graduate student from Dartmouth is eligible to enter the contest. Winning contest entries—photographs, drawings, sculpture, or paintings—will receive cash stipends totaling $5,000 and framed citations by the sculptor.

“Dartmouth is my chief college, the first one I ran away from. I ran from Harvard later, but Dartmouth first,” said the poet, whose weathered face can still be found in a much-admired statue—and in new artwork, too.