Anyone who travels on the highways of Northern New England is well aware of how much temperature and precipitation can vary from hilltop to valley. Now a Dartmouth-led research team has scaled down global climate models to create a sharper picture of this kind of local climate variation. 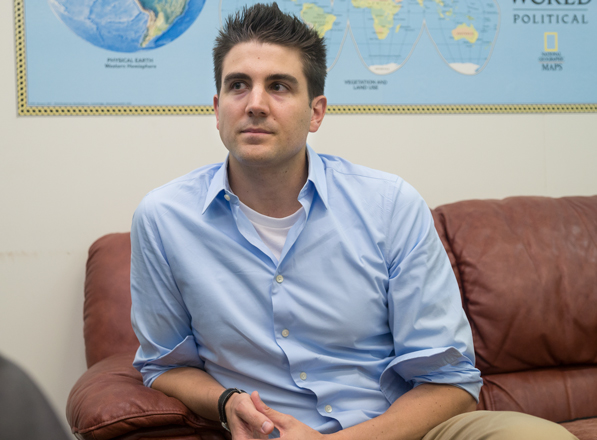 Jonathan Winter, an assistant professor of geography, specializes in climate prediction and the impact of climate change on water resources and agriculture. He is the lead author in a study on mapping local climate data. (Photo by Eli Burakian ’00)

These highly detailed climate projections could be useful as farmers, land use planners, or ski hill operators decide how to manage their little corner of the world under a changing climate, says Assistant Professor of Geography Jonathan Winter, the lead investigator on the study.

“What we’re developing is a method to create high-resolution climate data from global climate models,” he says.

Global climate models are computer models that are used to assess the impact of climate change. However, these models are depicted on a large grid map “typically running on a scale of about 100-200 kilometers on a side. That would be about two grid cells for the state of New Hampshire,” says Winter, who specializes in climate prediction and the impact of climate change on water resources and agriculture.

“Various research groups have used climate data from a network of weather stations to increase the spatial resolution of the coarse global climate model output to a scale of about 12 kilometers on a side, which offers more detail.  We’re using the high density of weather station observations in the Northeast to take this downscaling one step further, to a 1 kilometer grid, making the data more locally specific,” he says.

The immediate practical application of this research, conducted with researchers from the University of Vermont and the NASA Goddard Institute for Space Studies, is to help hydrologists, biologists, and economists who are developing a model to inform policies to help reduce fertilizer runoff into Lake Champlain. The high level of nutrients in the lake has contributed to a number of toxic algae blooms, Winter says.

Armed with more localized rainfall data based on this study, researchers are communicating with farmers in the Lake Champlain area about the best times to apply fertilizers, ways to create vegetation bands that prevent nutrient runoff, and better farming practices, which can reduce impact on the lake. 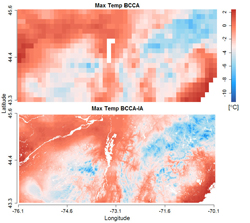 In applying the 1 kilometer grid to 30 years of climate station recordings from New York, Vermont, New Hampshire, and Maine, the researchers found that their high-resolution dataset was more accurate than the larger 12 km dataset for those areas with large variations in elevation.

“Where the old data doesn’t do well, like around Mount Mansfield, our downscaling improved it. In an area where the larger grid did fine, like the Burlington airport, our downscaling did not have an effect,” Winter said.

“In other words, it is helpful in areas with large elevation changes, like Vermont and New Hampshire, but not in the Midwest,” says Winter.

The next step, he says, will be to apply this more detailed method to global climate model predictions. “The idea is that if you can take global climate model data and add value in the historic period, you should be able to improve it for the future climate period,” he says.

“Take the example of a ski hill. I could see an application where we have a more detailed temperature and precipitation picture for a local area, enabling a better prediction of how much snowfall you will get and how many days can you can make snow at a particular ski area,” says Winter.