Given the extreme disruption caused by the Second World War, it would be easy to assume that the intellectual underpinnings of 20th-century international politics must have changed radically from the 1920s to the 1950s. 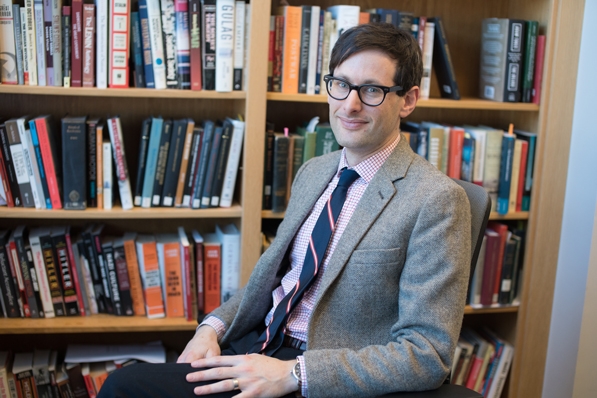 “With this specific prize, other people who received it in the past are scholars that I greatly admire, so I feel very honored to be on the same list,” says Associate Professor of History Udi Greenberg. (Photo by Eli Burakian ’00)

Not so, argues Udi Greenberg, an associate professor of history, in his book The Weimar Century: German Émigrés and the Ideological Foundations of the Cold War, which has won the 2016 European Studies Book Award. Given every two years by the multi-disciplinary Council for European Studies, the prize recognizes the best first book published within the past two years on any subject related to European studies.

Of receiving the award, Greenberg says, “It’s an honor to get a prize and to know that someone read your work and cared about it. With this specific prize, other people who received it in the past are scholars that I greatly admire, so I feel very honored to be on the same list.”

The Weimar Century follows five leading German thinkers of the Weimar Republic, each from different schools of thought, as they emigrated to the United States during the war and then back to West Germany as the Cold War heated up and Germany was being reconstructed as a liberal democracy.

“What was striking to me is that they said and wrote very similar things in the 1920s and in the 1950s,” Greenberg says. “It seemed counterintuitive that massive events like the rise of Nazism, World War II, and the Holocaust would not transform dramatically how people think about politics and international relations.”

One of the émigrés profiled in the book is a Jewish lawyer named Karl Loewenstein, “who began his career as a liberal supporter of democracy and Weimar,” Greenberg says. “He coined the theory of ‘militant democracy’—a theory that claimed that in order to save democracy, democratic states must restrict certain rights in fighting against anti-democrats.”

While Loewenstein’s ideas received little traction before the war, Greenberg says, “In the 1950s they became the mainstream of German thought. The Supreme Court in West Germany criminalized a German communist party citing the theory of militant democracy.”

In the course of his research, Greenberg also found that during the war, Loewenstein had aided American and Latin American governments in organizing detention camps in Latin America for citizens of German and Japanese descent. “The fact that a German émigré with this theory was an important figure in this project and gave it ideological and legal justification was a story that really surprised me,” he says.

Also featured in the book is social democratic thinker Ernst Fraenkl, “an important figure in reconstructing the German left and tying it to the Cold War,” Greenberg says.

Greenberg was surprised to find that Fraenkl, working with the United States, also played a role in drafting the constitution of South Korea. “He helped plan investment and development policies in South Korea that he clearly believed were the fulfillment of social democratic ideology from the ’20s—which the U.S. was helping him internationalize and implement,” Greenberg says. “That is a moment when you can see the transfer of ideas from Germany to East Asia through American power and to West Germany again. It’s very surprising that Americans invested in him so much power and authority.”

The Weimar Century is Greenberg’s first book, a project that began as his doctoral dissertation. “Most people begin the dissertation process by thinking about holes in scholarship, an element that scholars have not explored,” Greenberg says. To transform that into a book, he says, requires thinking about “not how can I fill a hole in scholarship, but how can we understand the world better through this story.”

In the process, Greenberg brought a draft of his work to a manuscript review seminar offered through the Dickey Center for International Understanding, in which outside scholars as well as Dartmouth faculty read a work in progress and give feedback to its author. (The Leslie Center for the Humanities offers a similar program for scholars in the humanities.)

The manuscript review “is one of the greatest experiences that Dartmouth provides its junior faculty,” Greenberg says. “It’s a huge privilege to have scholars take the time to read your work and give you such detailed feedback.”

The experience helped him shape the book for publication, Greenberg says, informing revisions of existing chapters as well as the introduction. “I rewrote the introduction to outline my arguments and explain why the story matters—things that I had thought were obvious but that people did not think were obvious.”

Greenberg’s research has also been informed by teaching undergraduates, he says. In the classroom, “student discussion always gives you new perspectives on the materials that you think you already know,” he says.

More concretely, a student whom he was advising for an independent study found records in Rauner Special Collections Library that gave Greenberg an important insight into the role of American NGOs in the international politics of the 1950s. “So a student here was curious about a topic, did an independent study, and tremendously informed my own thinking—and that found its way to the book,” he says.

“Dartmouth is a great school with great students and great resources for research,” Greenberg says. “For people like me who are interested in combining rigorous teaching with quality research, it’s the perfect environment to work in.”