Students in Peter Ciardelli’s TV production class put on their own version of Saturday Night Live. 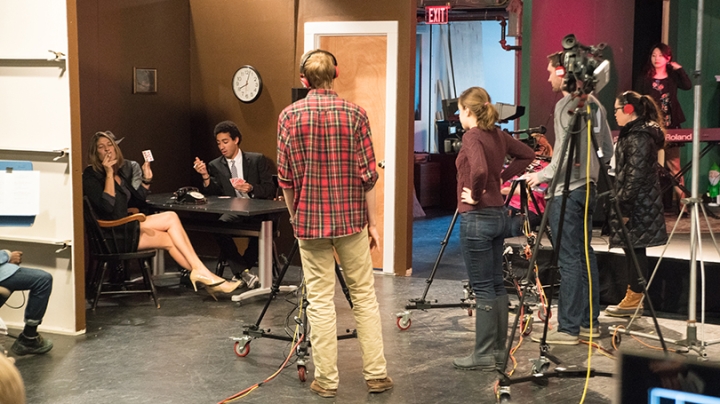 “They don’t know you can’t do this, so they can probably do it,” says Peter Ciardelli, a lecturer in film and media studies, of the students in his television production class, “Film and Media Studies 36.”

He is speaking two days before the class staged a Saturday Night Live-inspired variety show complete with comic sketches and digital shorts performed by student improv group Casual Thursday, an opening monologue by guest host Robert Cueva ’17, and live music by Tyne Freeman ’17 and her band.

Spoiler alert: They pulled it off. Written, directed, cast, edited, filmed, and performed by students, Thursday Night Live, or TNL as the students dubbed it, was the culminating project for the course, constructed—over the past three weeks—in roughly the same number of hours it takes the professional crew to produce an episode of SNL, including a dress rehearsal just two hours before the show went live.

Abby Rohman ’16 a history major and public policy minor who took the class as an elective, not knowing what to expect, says, “It’s been one of the most fun classes ever, because I’ve gotten to make things.”

Of producing TNL, Rohman says, “This is the biggest project I’ve ever done, and we’re all doing it together, which is exciting and stressful and rewarding. It’s a lot of brainstorming and problem solving. It’s given me a whole new appreciation for TV and film.”

The production aired last Thursday on DarTV. (If you missed it, it will rebroadcast tonight, March 10, at 8 on channel “Overflow 1 HD.”) 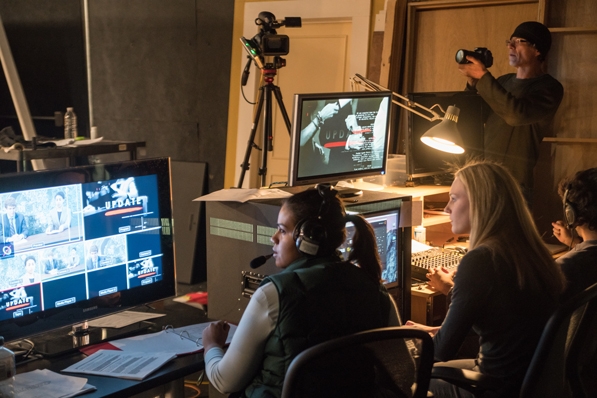 This is the second year the hands-on TV production course has been offered—a testament to the possibilities afforded by the Black Family Visual Arts Center (BVAC), which opened in 2012. Last year students produced an episode of the sitcom Big Bang Theory.

“There is no way we could have done this before,” Ciardelli says. “With the postproduction spaces we have upstairs, we’re able to have several computers with editing software that all link to a server, so people can collaborate. And the studio space—just the ability to hang lights, the infrastructure of Ethernet cabling and electricity, and the space to move around—we had nothing like that before.”

Advances in technology have also made it more affordable to purchase professional-grade equipment, he says—everything from TV switchers to cameras to monitors.

Throughout the term, the students learned the ins and outs of producing news interviews, reality TV, and situation comedy. “It’s intensely collaborative, because with TV production you cannot do it by yourself,” Ciardelli says.

This year was the first time Ciardelli has attempted a live broadcast production with the class. “The idea of doing something live in front of an audience separates TV from film,” he says. 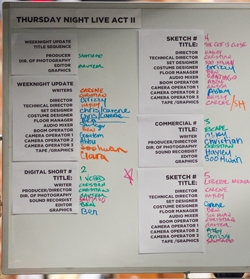 Deana Chou ’18 directed the first musical segment, and served as camera and boom operator during the sketches. “I never knew how much work goes into TV, especially for the director who needs to decide when to cut between cameras,” she says.

Ben Rosen was floor manager for the production. “That meant making sure all the cameras were where they had to be and the sets were all ready, and letting people know they’re up next,” he says. “It was a rush of adrenaline, but it was really fun.” Rosen, an undergraduate of Skidmore College, is at Dartmouth to complete a bachelor’s of engineering degree through the dual-degree program at Thayer School of Engineering.

Rosen describes the experience of editing a digital short for TNL called “I Voted,” in which a voter gets disproportionately irate at not receiving an “I voted” sticker at the polls.

“I was trying to find music to put underneath, and for whatever reason, I put in ‘Stars and Stripes Forever’ by John Philip Sousa,” he says. “I was by myself in the editing suite laughing out loud at the way the rhythm of the song lent itself to the rhythm of the short.”

Christopher Ivanyi, who runs the digital lab in the BVAC, worked with the class on computer graphics, animation, editing, and special effects. “This gives them a good hands-on experience of doing something like this live,” he says. “We’ve just thrown things at them, and it’s been amazing to see how fast they figure it out.”

A few days after the performance, the class reassembles in the studio to celebrate their accomplishment and watch a recording of the episode.

Before the lights dim, Ciardelli tells the students, “Just think, if this were Saturday Night Live, we’d be starting our next show right now.”