The Dartmouth men’s hockey team will take on top-seeded Quinnipiac Friday in the ECAC Hockey Semifinals in Lake Placid, N.Y. 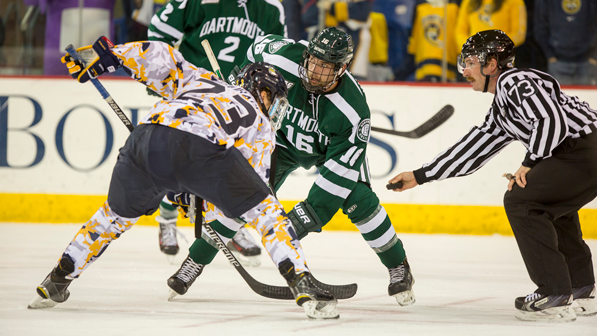 Kevan Kilistoff ’19 faces off against a Quinnipiac opponent back in November, and now Dartmouth prepares once again to take on the second-ranked Bobcats in the semifinals of the ECAC Men’s Hockey Championship in Lake Placid on Friday. (Photo by Mark Washburn)

The Big Green and Bobcats will play the earlier of the two semifinal games at 1980 Rink-Herb Brooks Arena, squaring off at 4:06 p.m.

For Dartmouth, the trip marks the team’s first foray back to the conference’s championship weekend since 2011, while Quinnipiac is making its fourth trip in as many years.

The Big Green earned their berth to Lake Placid by virtue of a two-game sweep at No. 7 and second-seeded Yale this past weekend. The format for the league’s final four teams depended on the outcome of the Bobcats’ best-of-three series with Cornell, which they clinched thanks to Sunday’s 6-3 victory in Game 3.

Harvard and St. Lawrence will play in the 7:35 p.m. game with the winners to meet Saturday at 7:30 p.m. with the Whitelaw Cup and an automatic berth into the NCAA Tournament on the line.