Dartmouth students got a taste of professional anthropology fieldwork when international leaders of government, NGOs, academia, and the Nepali diaspora convened at the College for the Nepal Earthquake Summit last month. 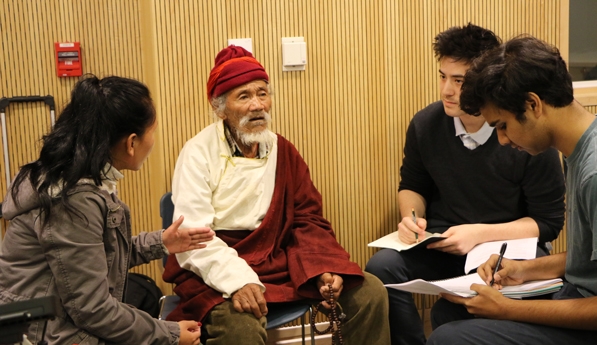 Students from Kenneth Bauer’s “Anthropology of Nepal and the Himalaya” class compile field notes from an interview with Thinley Lhundup, from Dolpo, Nepal, about his experience during the devastating April 2015 earthquake, which was centered in the Kathmandu valley. (Photo by Austin Lord ’06)

As part of Kenneth Bauer’s class “Anthropology of Tibet and the Himalayas,” the students took detailed anthropological field notes from the summit proceedings, interviewed Nepali participants, and produced a collaborative ethnography of the three-day event.

“This was a great opportunity for students to learn to capture in rich detail, and analyze through an anthropological lens, a very complex social event,” said Bauer, a lecturer in anthropology and program manager in human development at the John Sloan Dickey Center for International Understanding, which co-sponsored the summit.

It was the broad range of perspectives and expertise at the summit that struck Cecilia Robinson ’16 as she gathered field notes at the event. “In a span of five minutes, I talked to one of the leading linguists in Nepal, a Dartmouth trustee, an ambassador to Nepal, and someone from the Upper Valley who was there because they like the Nepali owner of the Base Camp Café in Hanover,” she said.

After the summit, the students submitted a collaboratively written conference report for publication in Himalaya, a peer-reviewed journal that has been published by the Association for Nepal and Himalayan Studies for more than 40 years.

Dartmouth’s Sienna Craig, an associate professor and chair of the department of anthropology, is an editor of the journal. She was a panelist at the summit, where she presented her recent National Science Foundation-funded research on Nepali narratives of the 2015 earthquake.

Ian Speers ’17, an anthropology major taking Bauer’s Tibet and Himalayas course, said the summit pushed him and his classmates to become working anthropologists rather than students of the discipline.

Speers participated in the summit not only as an observer, but also as a presenter on the panel discussing public health responses to the earthquake, along with representatives from the Geisel School of Medicine, Dartmouth-Hitchcock Medical Center, and Massachusetts General Hospital. Speers discussed his research on public health emergency preparedness in Nepal, which he conducted as a presidential scholar working with Craig.

Julietta Gervase ’16 said speaking to Nepalis and taking field notes on how they experienced the earthquake fundamentally changed her perspective on the disaster. “It made it a lot more real, a lot more meaningful,” she said.

“Just looking at the headlines, we saw images of Nepal designed to evoke sympathy—people portrayed as victims only. But meeting people who were there, the stories of resilience and generosity were really uplifting. People have a lot more agency then their portrayal in the media. I wouldn’t have got that without interacting with a person who was there,” she said.

The experience of using the lessons of the classroom to work at the summit as anthropologists added great depth to their understanding, students said.

“It was scary that we were trusted to do legitimate professional work,” said Gervase. “It was very intimidating to feel like our work had to be good enough to publish. But Professor Bauer just said, ‘You’ll be fine.’ It was a huge leap of faith on his part, and it really paid off. It was an awesome exercise—an awesome event.”

In addition to the Dickey Center, which oversees the annual Leila and Melville Straus 1960 Family Symposium, the Department of Anthropology, Asian and Middle Eastern Studies Program (AMES), the Linguistics Program, the Office of the Provost, and the Dean of the Faculty contributed to the Nepal Summit.