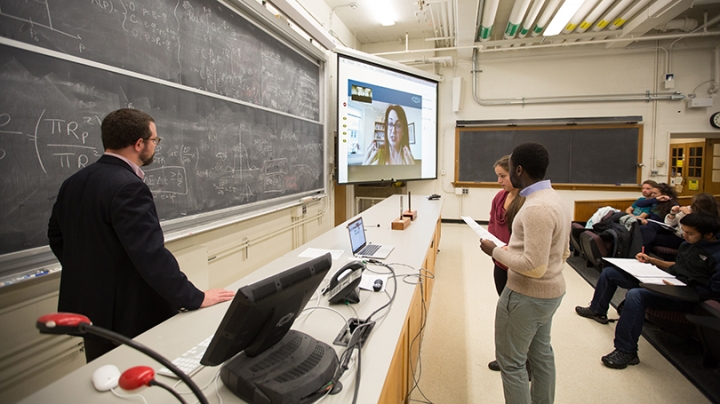 (from the left) As Professor Ryan Hickox, left, listens, Madison Smith ’18 and Joshua Otoo ’18 talk via Skype with postdoctoral fellow Sarah Ballard (on screen) of the MIT Kavli Institute for Astrophysics and Space Research. (Photo by Robert Gill)
3/06/2016
Body

When astrophysicist Ryan Hickox joined the Dartmouth faculty in 2011, he began looking for new ways to tell the story of science. Skype would be a key to his students “engaging science as a real living, breathing thing,” and DCAL—Dartmouth Center for the Advancement of Learning—would help make it happen.

Hickox’s circle of astronomical colleagues is wide, and he would have loved to bring some of them into his classroom. “But this approach would be completely impractical and asked too much of the scientists themselves,” says Hickox, an assistant professor in the Department of Physics and Astronomy.

He concluded that the next best thing would be to have colleagues visit remotely through interactive video chats on Skype.

“If we designed all the questions around the students’ interests and organized everything in advance, we could do this in a way that was very time efficient and fun for the scientists, and the students could get a lot out of it,” he says.

Hickox turned to DCAL, where he met with then-Director Thomas Luxon. “He helped me plan out my strategy for my first big course at Dartmouth. I told him about my Skype idea and he helped me figure out the logistics for how it would work and how it would be integrated into the rest of the class,” says Hickox.

DCAL is a resource for Dartmouth’s teachers, one that focuses on how people learn. It promotes a shift from a model of knowledge delivery to one of facilitating learning. DCAL actively assists educators with course design, implementation, and assessment.

“Without DCAL’s help, I am not sure I would have come up with as effective a model for this,” says Hickox.

Since 2012, there have been weekly video chats as part of Hickox’s “Astronomy 2/3” introductory course and they will be part of his spring Astronomy 15 course, “Introduction to Astrophysics.”

The response from students has been positive, including from Heather Flokos ’19, who was in Hickox’s fall astronomy class.

“Our class was able to learn from prominent astronomers regardless of where they were located,” Flokos says. “Although seeing the astronomers live would have been very cool, communicating with them was not hindered by the remote method. We were still able to see them and hear them as they talked excitedly, and they were still able to see us and hear the questions we had created.”

Classmate Terren Klein says, “Hearing about the research of the leaders from any academic field allows students to get a much better grasp on what the field is really about.”

The idea behind using video chat to connect people is becoming more popular, Hickox says. “I have seen a number of different initiatives around the country that are trying to link up people in this way.”

Hickox is developing a program using Skype that is sponsored by the National Science Foundation. The program targets K-12 schools in the Upper Valley of Vermont and New Hampshire and beyond. He is also involved in a partnership known as “Connect with Stem,” which brings guest scientists via Skype into the elementary school classrooms of the Bronx (N.Y.) Charter School for the Arts.