Students Persuade Library of Congress to Drop the I-Word

Against steep odds, a small but persistent group of Dartmouth students has persuaded the Library of Congress to change the way it catalogs holdings that refer to noncitizens who have entered the United States without authorization.

The unusual chain of events was set in motion in the fall of 2014 by Dartmouth CoFIRED (Dartmouth Coalition for Immigration Reform, Equality, and DREAMers). The organization was founded by students who were accepted by Dartmouth without citizenship documents and who strongly objected to the words sometimes used to describe them: “illegal aliens.”

With support from Baker-Berry Library librarians, they petitioned the Library of Congress to replace the subject heading “illegal aliens” (which has been in use for decades) with words they consider more accurate and less offensive: “undocumented immigrants.” 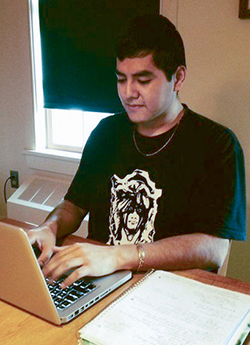 Oscar Cornejo ’17, who came to the United States without citizenship documents, studies for exams at Dartmouth. As a member of CoFIRED, he helped persuade the Library of Congress to change the way it describes immigrants in subject headings. (Photo courtesy of Vermont Public Radio)

After deliberating for two years, the Library of Congress agreed on March 25 to stop using the heading “illegal aliens,” and replace it with two new headings: “noncitizens” and “unauthorized immigration.”

The revised headings are not the exact wording the students had campaigned for, but they are a step forward, says Oscar Cornejo ’17, co-founder of CoFIRED. “I am so happy. It was a two-year battle. And I am also surprised, because originally they said ‘no.’” Cornejo concedes that some of his peers would prefer to be called “undocumented,” both in library holdings and in everyday conversation. “But ‘noncitizen,’ and ‘unauthorized’ are not as terrible as ‘illegal,’ he says. “I am tied to the immigration experience, yes, but there is no such thing as an ‘illegal person.’

CoFIRED began its campaign on campus by asking Baker-Berry Library to stop using the term “illegal aliens” to catalog its holdings. The students were partly inspired by a national effort spearheaded by the advocacy group “Race Forward.” Baker-Berry Library librarians Amy Witzel and Jill Baron explained that such changes cannot be made unilaterally by one library; they must originate at the Library of Congress. So they encouraged the students to take a well-researched appeal to that higher level.

Students Petition Library of Congress to ‘Drop the I-Word’

John DeSantis, Baker-Berry’s cataloging and metadata services librarian, incorporated the research into a formal request from Dartmouth College that the Library of Congress revise its heading. He also showed the request to the American Library Association, which adopted its own resolution calling for the switch to “undocumented immigrants.”

At first, the Library of Congress turned down both Dartmouth’s and the ALA’s requests, rejecting the proposed term, “undocumented immigrants,” as a suitable replacement for “illegal aliens.” Although the library’s policy and standards division agreed that “aliens” is problematic because it means, among other things, “beings from another planet,” the division found the term “undocumented immigrants” also problematic because “not all undocumented people are, or intend to be, immigrants, and many of them do have documents of some type.”

After holding meetings to resolve the dilemma, the Library of Congress decided, according to its announcement, that “a heading referring to the act of residing in a place without authorization should be used rather than a heading that describes the people as illegal or unauthorized.” That’s why “illegal aliens” will be replaced by two separate headings: “noncitizens” and “unauthorized immigration.”

Elizabeth Dechman, senior cataloging policy specialist at the Library of Congress, says the letter from the Dartmouth students was “carefully considered; along with other requests, it made a rationale for change because the time had come to do it, and it was one of the triggers that caused the library to make the change.”

The turnaround both surprised and delighted Dartmouth’s John DeSantis because he had thought the original rejection by the Library of Congress was final.

“This decision represents a great victory, not only for the Dartmouth students who initiated the process, but for all undocumented library users in the United States and those who champion their rights and dignity,” says DeSantis. Jeffrey Horrell, dean of libraries and librarian of the College, sees collaboration as the key to lobbying for this historic change, which will affect all library catalogs in the United States.

“Dartmouth is fortunate to have students and Library colleagues, in this case, furthering discussion and change on such a timely issue,” says Horrell.