Sugaring Season at the Organic Farm 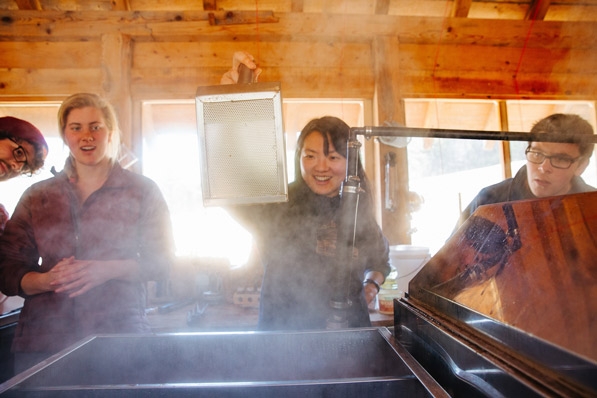 After collecting sap, students boil it in the sugarhouse at the Dartmouth Organic Farm. From left are Marshall Wilson ’17, Dana Wieland ’17, Claire Park ’16, and David Ringel ’19. (Photo by Robert Gill)

As temperatures warmed to above 40 degrees Fahrenheit during the day and dipped below freezing at night—ideal conditions for sap to run—the farm crew collected from about 90 of the farm’s sugar maple trees. They worked the old-fashioned way, with taps and buckets manually emptied into tanks feeding into the farm’s wood-fired sugarhouse.

It’s hot work. To heat the watery sap to the requisite 219 degrees to thicken it into syrup, the stove needed stoking every three to five minutes with firewood sustainably harvested from the farm and other campus property. On average it takes 40 gallons of sap to make one gallon of syrup. This year, for their labor, the crew members—Yolanda Huerta ’19, Ellen Kim ’17, Claire Park ’16, David Ringel ’19, Dana Wieland ’17, Marshall Wilson ’17, Leah Valdez ’18, and Amanda Zhou ’19—expect a yield of five to six gallons of sweet goodness.

See a slide show of this year’s sugaring operation.