As more and more members of the armed forces end their military service and return to civilian life, Dartmouth is finding new ways to encourage them to seek higher education. The College has launched a partnership with Posse, a nonprofit foundation, to enroll groups of veterans and provide strong financial and academic support as they reach for ambitious goals. 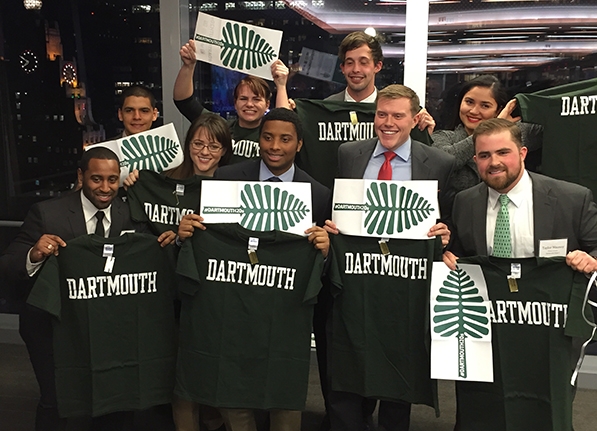 Founded in 1989, Posse identifies high school students with extraordinary potential and helps them to enroll and excel in selective colleges that might otherwise have seemed beyond their reach. In 2012, Posse launched a special veterans’ initiative. Dartmouth will welcome its first 10 Posse veterans this fall, guaranteeing free tuition, even if the GI bill and other government funding runs out.President Phil Hanlon ’77 says Dartmouth gains immeasurably from veterans who join the community. “As a nation we owe our servicemen and servicewomen access to first-rate educational opportunities. In addition, Dartmouth is fundamentally enriched by the presence of veterans on our campus,” he says.

James Wright Named
To Veterans Board

President Emeritus James Wright began reaching out to veterans over 15 years ago, when he made a series of visits to U.S. military medical facilities, encouraging servicemen and women to continue their education.

The son of a World War II veteran, Wright served in the Marine Corps before entering college. His book about the experience of veterans from the American Revolution to the war in Afghanistan, Those Who Have Borne the Battle: A History of America’s Wars and Those Who Fought Them,“ was published in 2012, and his forthcoming book is about the Vietnam War.

Wright worked with the American Council on Education to create an educational counseling program for wounded U.S. veterans, and was involved in developing the Yellow Ribbon Program that provided for private institutions to be included in the post-9/11 G.I. Bill.

In recognition of Wright’s service to military men and women, he was recently named to the board of directors of Iraq and Afghanistan Veterans of America. IAVA CEO Paul Rieckhoff calls Wright ”an incredible American hero. He is a true visionary for American veterans and a living example of what veterans can achieve.“

One of the students expecting to come to Hanover in the fall is Shawn Gaynor, a single mother from Boise, Idaho, who spent five years in the Marine Corps, stationed primarily in Camp Pendleton, Calif. At Dartmouth, Gaynor hopes to prepare for a career that will bring economic security for her and her 2-year-old daughter, Alice. ”Every opportunity that I have pursued has been in pursuit of a better life for her and for us,“ Gaynor says.

Some Posse veterans have seen active combat. Taylor Mauney, a Marine infantryman, was deployed in 2010 to Helmand Province, Afghanistan, where an enemy bomb blast left him with a traumatic brain injury. ”The ability to attend an Ivy League school is something I never would have dreamed of,“ says Mauney, who lives in Arlington, Va. ”I came from humble beginnings, watching my mother working extra night shifts to support two children on her own. Despite struggling, my mother instilled in me that if I worked hard and was honest I could be anything I wanted.“

That kind of determination and drive can help veterans move successfully from military service into academic life, says Paul Sunde, interim dean of admissions and financial aid. ”We have found that veterans bring an extremely valuable perspective to campus in academic and social ways and they add enormously to the collective Dartmouth experience,“ he says. He hopes adding the Posse program will help Dartmouth identify and attract qualified candidates returning from military service.

Stephen Fraser, from Denver, Colo., is eager to begin classes. ”My parents didn’t go to college,“ he says. ”We couldn’t afford it for me and anyway, I didn’t think I was smart enough to succeed in academics.“ But as a Marine serving in Singapore, the Philippines, the United Arab Emirates, Bahrain, Jordan, and Israel, he says, he ”realized his potential“ and wants to build on his leadership skills at Dartmouth.

In addition to Gaynor, Fraser, and Mauney, the 2020 Posse class includes Marine Corps veteran Benjamin Eisner, a computer scientist; Daniel Grau, who was a military policeman in the Army; Jhon Ortiz, a battle systems operator in the National Guard; Air Force veteran Karla Rosas, who plans to become an immigration lawyer; Justin Wince, an optometry technician in the Air Force who provided relief services in Haiti after the 2010 earthquake; Brad Carney, who served as an Army Ranger in Iraq; and Nataly deFreitas, who joined the Army Reserves at 18 and deployed to Afghanistan as a psychological operations specialist, trying to convince local populations to support U.S. initiatives.

”The Posse veterans will come to Dartmouth having lived through some of the most harrowing challenges one can imagine,“ says Dean of the College Rebecca Biron. ”They are entering a four-year liberal arts program as students who already have a wealth of professional and international experience. The transition to the academic world poses a different set of social and intellectual challenges, which these students are eager and well positioned to take on."

Biron says the Posse Foundation will provide several weeks of pre-collegiate training and orientation. After that, they will spend time this summer at Dartmouth, taking campus tours, meeting student support staff, and familiarizing themselves with the Upper Valley, including the Veterans Affairs Medical Center in White River Junction, Vt. In addition, each entering class of Posse veterans will be assigned a faculty mentor to make sure they are fully oriented to college life.