The Great Wall in northern China is attracting more and more tourists every year. That’s the good news and the bad news about the longest man-made structure in the world, says Oliver Engelhart ’18, who has hiked remote sections of the ancient series of walls and watchtowers. His online travelogue serves as a guidebook for anyone who wants to match the challenge he set for himself last summer, after his first year at Dartmouth, when he trekked about 280 miles along part of the stone defense system. Engelhart saw the damage more careless travelers are doing to the most fragile sections. He believes the Great Wall, which snakes close to 13,000 miles through China, should be preserved, not exploited in ways that destroy its historical value. 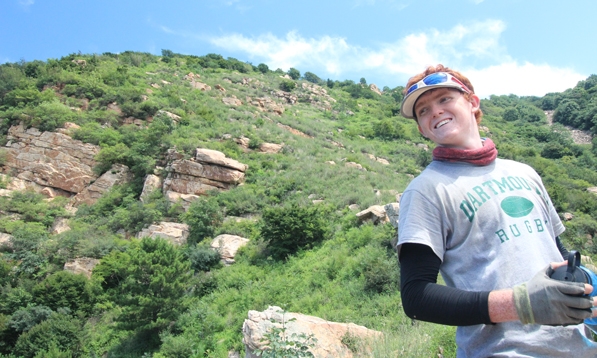 Oliver Engelhart ’18 heads down the wild face of the Huangyaguan mountain ridge from the wild wall onto the restored section within the village. “I wore my Dartmouth Rugby jersey everyday for four weeks, by the end of the trek I’m sure it could stand up and walk off by itself,” he says. (Photo courtesy of Oliver Engelhart ’18)

Born and raised in Hong Kong, Engelhart is half-American, half-British, and all about athletic adventure. The rock climber, sailor, rugby player and ultra-marathoner launched his expedition at the suggestion of a family friend who believes sightseers need better maps and guidance about how to appreciate and preserve the wall.

Engelhart began the journey with his twin brother, Sebastian, who, according to plan, left after the first week and briefly returned, with the twins’ mother, toward the end of the trip. 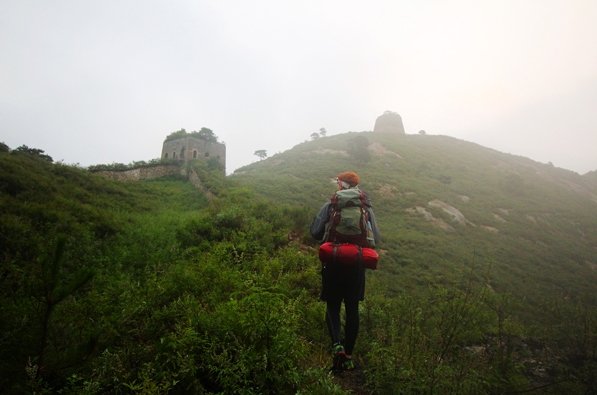 On the third day of the expedition, Englehart leaves Jiumenkou village early morning and makes the ascent to the ridge of the Jiumenkou Great Wall. (Photo by Sebastian Engelhart)

“We started at sunrise in Shanhaiguan, where the wall meets the ocean straight into the mountains,” Engelhart recalls. In the blog he writes about day one: “Rain and thunder bore down on us as we ascended the near vertical wall.”

On rainy or foggy nights, Engelhart wandered into primitive villages, looking for refuge. Some Chinese families shelter travelers for $10 a day. One hospitable family of goat herders and schoolteachers kept in touch after he went on his way from their home. “The 30-year-old son was fascinated with my trek. He would text me every other day to check where I was, asking about different types of walls along the way,” Engelhart says.

Speaking Mandarin Chinese, Engelhart was able to learn a lot about life in the countryside. Hiking alone, though, he had some close calls.

“The second and third weeks got scary,” he admits, “because I made some poor decisions.” In sparsely settled areas he had to sleep­­—or try to—in his tent on the wall. “The biggest problem was finding water,” he says. In some places, the Great Wall is almost impossible to find and follow on the Google Earth maps Engelhart was relying on. His own mapping got more difficult as navigation became challenging, and hiking became more dangerous.

“There was one point when I was climbing a wall—it’s called the “wild wall” because it’s built into cliff bases. I thought I could climb the cliff with 50-pound backpack and trekking shoes. I’m a very adept climber. But this wall became an overhang. I couldn’t go down because it was raining; I couldn’t go back up because it was an overhang, so I decided to go around it, and I spent three hours trying to go 500 meters in distance trying to get around,” Engelhart says.

In the process, he fell 20 feet. “I was very lucky,” he admits. “I was in a lot of trouble. I had to really re-evaluate how I was going to progress through this next phase in the week and a half I had left.”

By the end of his month-long project, Engelhart had walked and mapped about a third of the distance he had hoped to cover. But he wasn’t discouraged, because he had seen parts of a relic few people have experienced. Some wall sections, though, are being rebuilt to accommodate tourist traffic in ways that make them less wild and beautiful, and Engelhart regrets that.

His journey shaped his understanding of the country he is learning more about at Dartmouth, where he plans to major in government. “I think my experiences in China as a whole, meeting people living in rural areas, shed light on various points of view, including differences between students who grew up in the United States and those I met and interacted with while trekking the wall.”

Engelhart, who, like his classmates, will spend sophomore summer at Dartmouth, is not sure when he can mount another ambitious trek. But eventually he hopes to explore more sections of the Great Wall.

“I do believe my future is in China and Asia,” he says.