Dartmouth researchers show how dams and land use are altering flows of sediment. 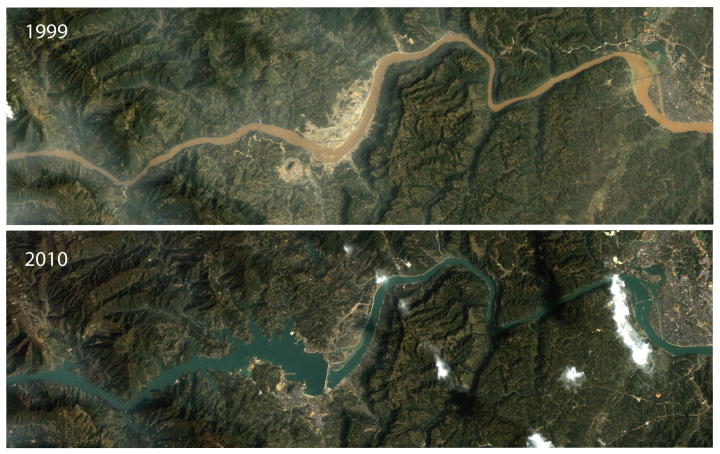 Sediment flows during and after construction of Three Gorges Dam, Yangtze River, China, in 1999 (top) and 2010, when none are visible. (Photos courtesy of NASA Landsat/United States Geological Survey.)
7/07/2022
More Reading

The way rivers function is significantly affected by how much sediment they transport and where it gets deposited.

River sediment—mostly sand, silt, and clay—plays a critical ecological role, as it provides habitat for organisms downstream and in estuaries. It is also important for human life, resupplying nutrients to agricultural soils in floodplains and buffering the rise in sea levels from climate change by delivering sand to deltas and coastlines.

But these functions are under threat: in the past 40 years, humans have caused unprecedented, consequential changes to river sediment transport, according to a new Dartmouth study published in Science.

Using satellite images from the joint NASA/United States Geological Survey Landsat program and digital archives of hydrologic data, Dartmouth researchers examined changes in how much sediment was carried to the oceans by 414 of the world’s largest rivers from 1984 to 2020.

“Our results tell a tale of two hemispheres. The north has seen major reductions in river sediment transport over the past 40 years, while the south has seen large increases over the same period,” says lead author and postdoctoral fellow Evan Dethier, Guarini ’15 and ’20. 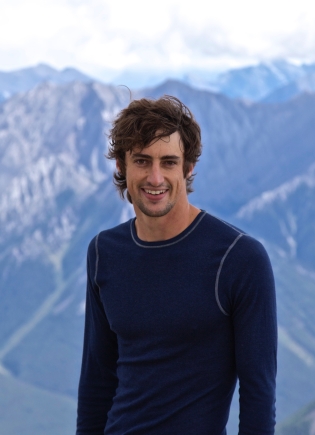 “Humans have been able to alter the world’s biggest rivers at rates that are unprecedented in the recent geologic record,” Dethier adds. “The amount of sediment rivers carry is generally dictated by natural processes in watersheds, like how much rain there is or whether there are landslides or vegetation. We find that direct human activities are overwhelming these natural processes, and even outweighing the effects of climate change.”

The findings show that massive 20th century dam building in the global hydrologic north — North America, Europe, and Asia — has reduced the global delivery of suspended sediment from rivers to the oceans by 49% relative to pre-dam conditions. This reduction has occurred despite major increases in sediment delivery from the global hydrologic south—South America, Africa, and Oceania. There, sediment transport has increased on 36% of its rivers in the region due to major land use change.

The changes to sediment transport in the south have been driven mainly by intensive land use changes, most of which are associated with deforestation. Notable examples include logging in Malaysia; alluvial gold mining in South America and sub-Saharan Africa; sand mining in Bangladesh and India; and palm oil plantations across much of Oceania. (In prior research, Dethier found that artisanal gold mining in Peru is associated with increases in suspended sediment levels).

In the north, dam building has been the dominant agent of change for rivers in the past several centuries.

“One of the motivations for this research has been the global expansion of building large dams,” says co-author Francis Magilligan, a professor of geography and the Frank J. Reagan ’09 Chair of Policy Studies, who studies dams and dam removal.

He notes that in the United States alone, there are more than 90,000 dams listed in the National Inventory of Dams.

“One way to think about this is that we, as a nation, have been building on average one dam per day since the signing of the Declaration of Independence,” Magilligan says.

Rivers are responsible for creating floodplains, sandbars, estuaries, and deltas due to the sediment that they transport. However, once a dam is installed, that supply of sediment, including its nutrients, is often shut off.

In the U.S. and other countries in the Northern Hemisphere, however, many dams are more than a half-century old, and fewer dams are being built in the 21st century. Recent declines in sediment transport are relatively minimal, as a result. Dam building in Eurasia and Asia in the past 30 years, especially in China, has driven ongoing reductions in global sediment transport.

“For low-lying countries in delta regions, sediment supply from rivers has in the past been able to help offset the effects of sea level rise from climate change,” says Magilligan. “But now you’ve got the double drivers of declining sediment from dam construction and rising sea levels.”

He says it is “particularly worrisome for densely populated places like Vietnam,” where sediment supply has been reduced significantly by dam activity along the Mekong River.

The results in the north are striking and could foreshadow future changes to come for the south, as the study reports that there are more than 300 dams planned for large rivers in South America and Oceania. The Amazon River carries more sediment than any other river in the world and is a major target for these dams. 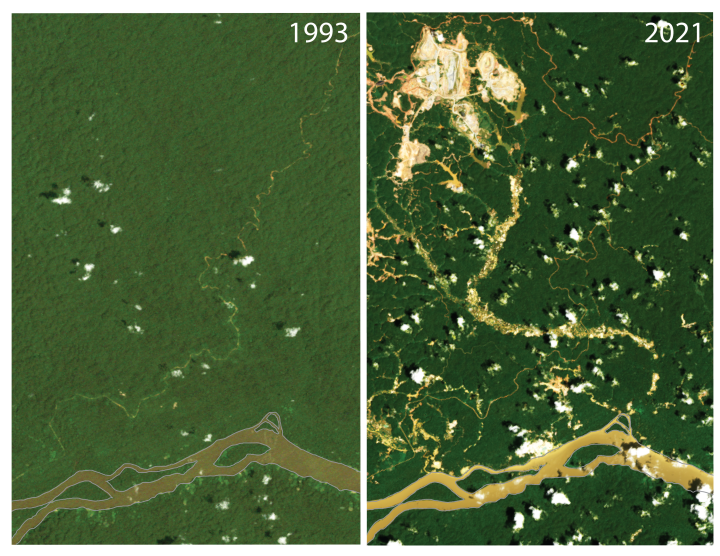 The Maroni River flows through rainforest along the Suriname-Guyana border. Its basin was relatively unaltered in 1993 (left), but by 2021, muddy water flows into the river due to erosion caused by deforestation from mining operations. (Photos courtesy of NASA Landsat/United States Geological Survey.)

“Rivers are pretty sensitive indicators of what we’re doing to the surface of the Earth — they are sort of like a thermometer for land use change,” says co-author Carl Renshaw, the Evans Family Distinguished Professor of Earth Sciences.

“Yet, for rivers in the Northern Hemisphere, dams are now blocking that signal for sediment coming to the ocean.”

Renshaw says that, “It’s well-established that there’s a soil loss crisis in the U.S. but we just don’t see it in the sediment export record because it’s all getting stuck behind these dams, whereas we can see the signal for rivers in the global south.”

Dethier notes that in many cases throughout the world, humans have developed industry, agriculture, transportation, tourism and other activities around rivers, “but when human activity suddenly disrupts the way rivers function, it may become difficult to adapt in real-time to such impacts.”

How dams retain sediment and how land use practices are increasing downstream erosion are principles which the researchers hope can be used to help inform planning decisions and environmental management policies in riparian and coastal zones in the future.