Angélique Kidjo and Her Band Return to the Hop

A Grammy-winning singer/songwriter, UN-appointed human rights activist and, more recently, author and actor, Angélique Kidjo and her band will return to the Hopkins Center for the Arts at 7 p.m. on Tuesday, April 26. 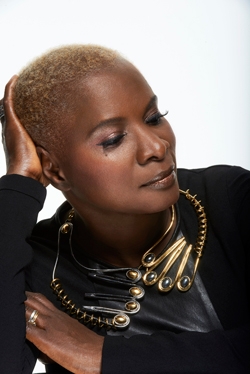 Kidjo will also sit down for a free flowing “conversation with the artist” with Associate Professor of Religion and of African and African American Studies Robert Baum to discuss her music and global activism and building access to education for the world’s most vulnerable populations. The conversation will take place at 4:30 p.m. on Wednesday, April 27, in Spaulding Auditorium. The event is free and open to the public

Known for her full, clear voice, her dance moves, and her ability to get concert hall audiences dancing in the aisles and onto the stage with her, the Benin-born Kidjo has been called “Africa’s premier diva” (TIME) and “the undisputed queen of African music” (London Telegraph). She has recorded 15 albums over her 35-year career, swinging between Afropop, jazz, gospel, pop, rock, Caribbean and Latin styles, and singing in French, English, and the Beninese languages of Yoruba and Fon. She recently won her third Grammy Award for her most recent album, Sings (429 Records), for Best World Music Album.

Writes Billboard magazine: “With a canyon-filling voice, Kidjo celebrates the power of African womanhood on her 13th album, blending choirs from Kenya and her native Benin and melodies from throughout Western Africa.”

Says NPR: “The power of Kidjo’s unflappable voice, the range of her emotional expression, the stellar, genre-bending musicians who back her and the infectious, activist energy that courses through her songs all transcend any native tongue.”

Born Angélique Kpasseloko Hinto Hounsinou Kandjo Manta Zogbin Kidjo to artistic, politically progressive parents, she began her career in her home country. However, after the advent of politically and culturally repressive Communist rule in the 1980s, she emigrated to Paris and later to New York City, where she now lives.

Artists she has recorded with include Branford Marsalis, Carlos Santana, Gilberto Gil, Dave Matthews, Josh Groban, Alicia Keys, Joss Stone, Ziggy Marley, Dianne Reeves, Bono, John Legend, and Dr. John. Her 2014 album, EVE, featured New York’s most-respected jazz session players, including guitarist Lionel Loueke, drummer Steve Jordan and bassist Christian McBride. She followed this in 2015 with Angelique Kidjo SINGS, in which she is backed by the Luxembourg Philharmonic Orchestra. She has been nominated for four Grammy awards and has won two, most recently for EVE, which also debuted atop the Billboard World Music chart and was rated No. 1 in the Top 12 of World Music albums for 2014 by Radio France Internationale.