Last fall, Azhar Hussain ’19 and DhungJoo Kim ’19 took a weekend trip to visit a friend in Boston. Unfortunately, they missed the Dartmouth Coach back to Hanover. But the mishap gave them an idea. 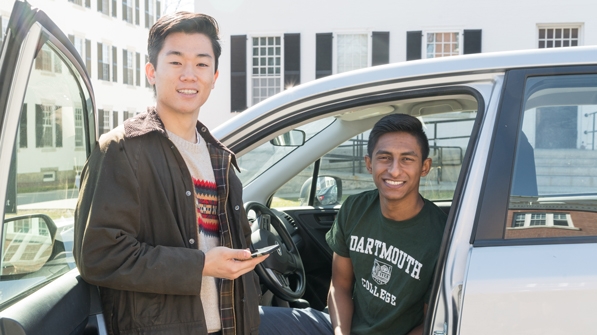 “If we’d had some way of knowing who was driving back from Boston, we might have caught a ride,” says Hussain.

As it was, says Kim, “We had to stay an extra day with our friend and catch another bus.”

The two realized that college students everywhere had to be facing similar situations. Hussain began calling friends back home in Texas and Kim, who is from Pennsylvania, called friends at Penn State.

“They were all saying the same thing,” Hussain says. “Whether it’s coming off breaks or just going into the city for a weekend, they were finding it hard to travel because either it is expensive or you were facing a long, uncomfortable bus ride.”

Hussain and Kim came up with a solution—a mobile application running on smart-phones.

“Let’s say I am a college student with a car, I am driving from here to Boston and I have three empty seats,” says Hussain. “I can post on our application that I am leaving at this date and time. Another college student who also wants to travel that same route and time can then book a seat in the car.”

Hussain had taken the introductory computer science course in the fall with Professor Hany Farid and found that computer science was “something I’m passionate about because of the tools it provides to build your ideas.” Hussain had lunch with Farid and discussed the proposed app. “He was a big fan,” says Hussain.

“You have got to be impressed by a pair of first-year students conceiving of, designing, and implementing a commercially viable product that fills a need for tens of thousands of students around the country,” Farid said.

Christened “HytchCar,” the app’s website describes it as “a social ride sharing platform designed for long distance travel. Imagine if you could go home from college or take a road trip across the country for a fraction of the price of a plane and without the hassle of a bus. HytchCar is a mobile application that allows college students to post and book rides to locations around the U.S.”

In order to achieve the critical mass necessary for the match-ups to work, their strategy initially targets three large state schools—Texas A&M, Penn State, and the University of Illinois at Urbana-Champaign. Dartmouth was not included due to its small size. Hussain and Kim have raised $150,000 in seed money, and the app is moving forward with development, working with Dartmouth’s DALI Lab and a three-member development team.

“We project that our pricing will be about 12 cents per mile,” says Hussain. “A drive from here to Boston would run you about $15. When you see a ride you want on the app, you click ‘book’ and our app processes the payment easily and securely. We take a small service fee and the rest goes straight to the driver.

“We use a pretty simple algorithm to figure out ride pricing, ride distances, and how to match people with rides. All our application is doing is facilitating your bringing aboard a friend, a fellow student, or a coworker, and they are just helping paying for the cost of gas/maintenance of the car.”

As application development continues, Hussain and Kim are targeting June for a launch. “We’re setting up a campus ambassador program at our three launch universities to get local students to represent and promote the brand to build a user base,” says Hussain. “We will also be reaching out to school organizations and fraternities to get students to use the app with their friends.”

Hussain says to watch for a Facebook ad campaign, as well.