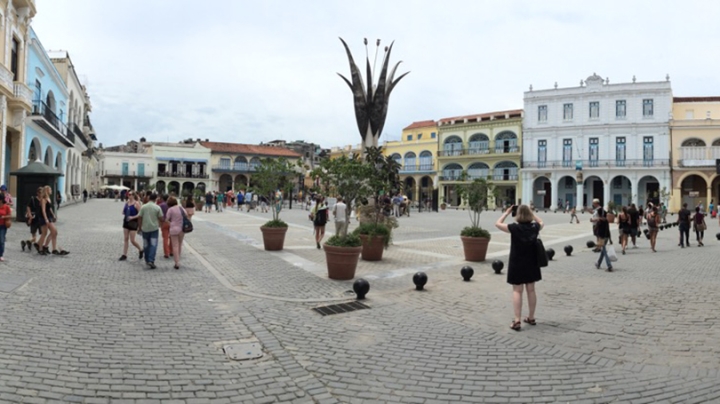 During spring break, about a year after President Obama’s executive order re-opening cultural and commercial pathways to Cuba, a group of Dartmouth faculty and staff went to Havana to celebrate the opening of the Galería Haydee Santamaría, an elegantly renovated art gallery that will serve as a classroom building for exchange students. The travelers met with Cuban scholars and officials as well as faculty and staff from the Consortium for Advanced Studies Abroad (CASA), which includes Dartmouth and eight other U.S. colleges and universities.

The Dartmouth delegation included John Tansey, executive director of the Frank J. Guarini Institute for International Education; Lisa Baldez, Cheheyl Professor and director of the Dartmouth Center for the Advancement of Learning and a professor of government and  of Latin American, Latino, and Caribbean Studies; John Carey, a professor of government and the John Wentworth Professor in the Social Sciences; Raúl Bueno, a professor and chair of the Department of Spanish and Portuguese; Jill Baron, Latin American studies librarian; and Analola Santana, an assistant professor of Spanish and Portuguese.

The trip coincided with the visit to Cuba by President Barack Obama, the first sitting U.S. president to set foot on the island in nearly seven decades. Obama and his family attended another watershed event witnessed by the Dartmouth travelers: an exhibition major league baseball game between the Tampa Bay Rays and the Cuban National Team (Rays 4, Cuba 1).

For Carey, who has made four trips to Cuba (his second, in 2008, was as coach of his son’s little league baseball team), the game was symbolic of common ground between two nations re-establishing ties. Baseball, he says, is a “passion they share,” but there’s been tension in the past, when the only way for Cuban baseball players to join American teams was to defect. “Now it’s possible for them to come to the U.S. and go back,” Carey says. “It’s a moment of optimism and it was an incredible event. I was thrilled to be in that stadium.” 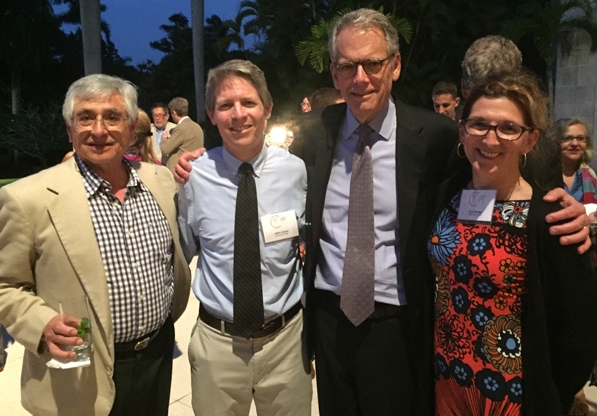 From left, Raúl Bueno, professor of Spanish and Portuguese, John Carey, professor of government, Jeffrey DeLaurentis, U.S. ambassador to Cuba, and Lisa Baldez, director of the Dartmouth Center for the Advancement of Learning, gather for a reception for Consortium for Advanced Study Abroad members at the ambassador’s residence in Havana. Photo by John Tansey)

Carey is also optimistic about the foreign study program that took the first cohort of students to Havana last fall. Those students were not present for the visit by faculty and staff over spring break, but Carey and other members of the Dartmouth team met students from other schools, along with faculty and staff who are part of the larger consortium. Dartmouth exchange students typically take courses at both the University of Havana, which educates mostly Cuban students, and the Casa de las Américas, a center for international engagement. Six Dartmouth students have signed up to take classes in Cuba through the CASA program next fall.

“Part of the intellectual value of this exchange,” Carey says, “is full immersion in the Cuban educational experience” and in everyday life. That means spending much less time than Americans typically devote to the Internet—access being expensive and scarce in Cuba—and more time reading books and talking to local students and residents.

Carey says the trip deepened Dartmouth’s involvement in designing future opportunities for students, faculty, and staff to spend time in a country undergoing rapid change. “My overall impression, traveling to Cuba over the years, has been how slowly change has come to the country,” says Carey. Now, he says, students will have a front row seat for what he expects will be a more rapid transformation of the Cuban economy and culture.

“Maybe it was just the euphoria of our visit, but we may look back 15 years from now and realize this past week was a turning point,” he says.

The trip was memorable for at least one other reason: On March 25, the Rolling Stones gave what they called “A Concert for Amity,” marking the first time a British rock band has ever performed in Cuba. In past years, Cuban officials tried to prevent young people from listening to rock music. But now those rules, too, are being relaxed, and the government now allows large outdoor concerts.

“The Stones put on an incredible show,” Carey says, “and it also may have marked another moment when people will say that Cuba opened itself up to the world.”

The Rolling Stones were not the only musicians to visit Cuba that week. Students from Dartmouth’s Barbary Coast ensemble also took a road trip to Havana and Matanzas during spring break. The group met and played music with several groups of Cuban musicians, both students and professionals, gave two performances, visited a music conservatory, rode in vintage cars through scenic neighborhoods, and soaked up the sights, sounds, and tastes of a vibrant culture. 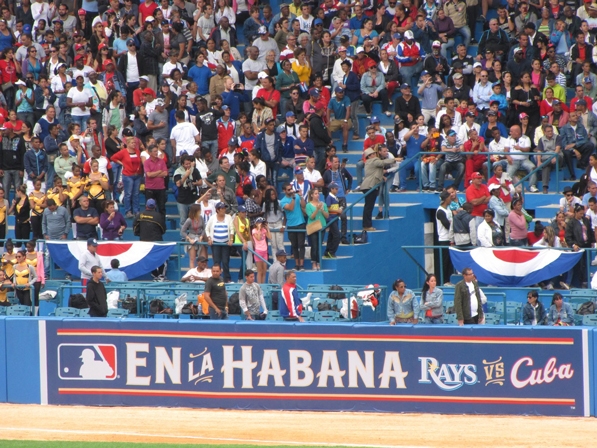 Fans await the start of an exhibition baseball game on March 22 between the Tampa Bay Rays and the Cuban National Team at Estadio Latinoamericano in Havana. (Photo by John Tansey)
Written by
Charlotte E. Albright
Share this
FacebookTwitterEmail
Quoted
Quote