Chenfeng Ke looks around his tidy office in the Burke Laboratory building. He points at his cell phone, his desk, the white board, pens, even the paint on the wall. “Plastic,” he says, “all plastic.” 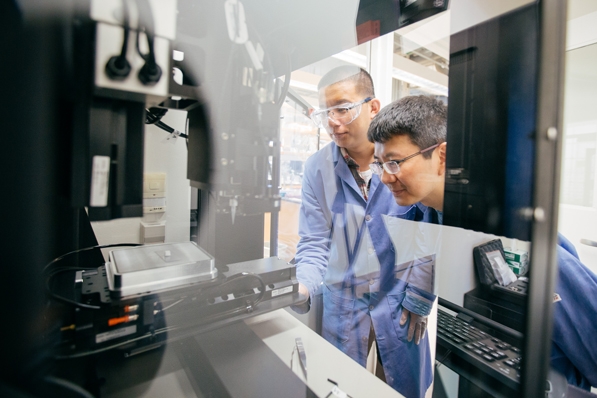 Professor of Chemistry Chenfeng Ke and his post-doctoral assistant, Pengfei Zhang, look at the 3-D printer used in Ke’s lab to test new materials that might be an improvement upon the plastics and metals currently used in such printers. (Photo by Robert Gill)

But while they may be ubiquitous, synthetic materials are not easy to produce. The building blocks are organic molecules that contain carbon, among other substances, generally derived from petroleum or natural gas. A chain-like molecule with repeating structural units is called a polymer. But it takes a lot of energy to create certain polymers, and Ke wants to find a way to reduce that energy use.

That’s one reason he’s learning and teaching about how molecules organize themselves into what chemists call “organic covalent frameworks”: porous, crystalline solids made from light elements (like hydrogen, carbon, and oxygen) capable of forming strong bonds. Ke specializes in the creation and analysis of porous polymers—materials that are able to absorb a wide range of compounds.

“You could think of them as filters,” he says of the synthetic sponge-like structures that provide many spaces where molecules can travel and be stored. 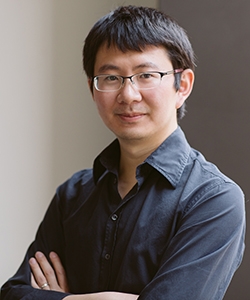 Professor of Chemistry Chenfeng Ke did his postdoctoral research at Northwestern University, where he helped develop a new security ink that could make counterfeiting money more difficult. (Photo by Robert Gill)

Who might benefit from this fundamental research? Ke says he does not have specific applications in mind, but notes that the petroleum industry, which uses porous polymers to separate gases from one another, might like a better, cheaper way to distill, for example, hydrocarbons. Currently, Ke says, these porous materials are not stable enough, especially against moisture. “We are looking for a strategy to make these materials more stable and easy to characterize,” he says.

Another new technology that could be improved by materials development is 3-D printing. Currently, 3-D printers use a limited range of plastics or metals, in liquid or solid form, to create three-dimensional objects. “But there are two bottlenecks,” Ke says. “One is that engineers who use these printers don’t have a good selection of printing materials to choose from. The other is that it takes too long to build a 3-D object.” The longer it takes, the more energy the printer consumes. “As a chemist doing materials synthesis, I would like to provide more options for engineers,” says Ke.

That includes his colleagues at Thayer School of Engineering. “Eventually we would like to have a graduate program in materials science and engineering,” he says.

Inside Ke’s lab, which opened two months ago, two post-doctoral researchers, one graduate student, and three undergraduate students are making and testing polymers to see how well they hold up in a large, highly sophisticated 3-D printer that occupies one corner of the lab. On one table are rows of tiny white blocks—they look like sugar cubes, only much smaller—stored and labeled in shallow, clear plastic containers. “Chemically they are identical to glass,” Ke explains. “We are testing them to see if they could be used for printing.”

On another table, postdoctoral fellow, Pengfei Zhang, is peering at a set of tiny, porous black blocks on a computer screen connected to a microscope.  “This material is compatible with the body, and super-light,” Ke says as he observes Zhang. He can imagine health applications exploiting those properties—for example, a device might be implanted in a person with diabetes to detect blood sugars.

Ke walks over to a windowed display case and looks at examples of polymers lined up like little gems the size of earrings. Asked if he could make them into diamonds, mimicking the product nature has taken eons to produce, he laughs. Then he looks more serious. “That’s interesting,” he says, adding that it would take very high temperatures and pressures to replicate the kind of diamond that comes from earthbound carbon.

Making diamonds in a chemistry lab may seem preposterous, but Ke is always open to new possibilities. That’s one reason he enjoys teaching undergraduates. “They ask so many good questions about what is possible,” he says.

That’s what Ke has done, too, first as a student at Nankai University in China and later as a Newton International Fellow at the University of Bristol. He did his postdoctoral research at Northwestern University, where he helped develop a new security ink that could make counterfeiting money more difficult.

At Dartmouth, Ke hopes to add more students to the team that is inventing and testing new synthetic materials.