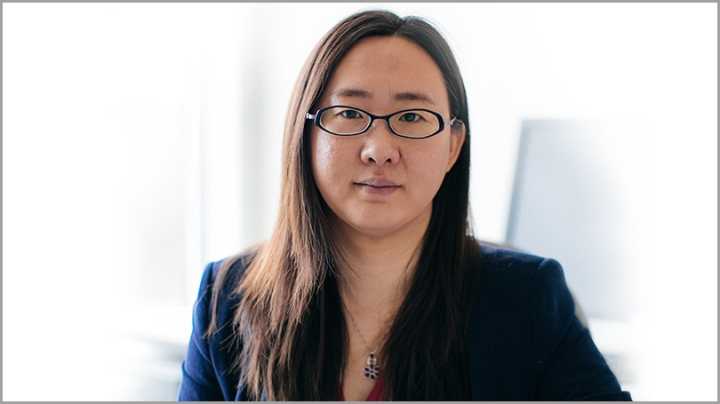 Electric cars have the potential to dramatically reduce carbon dioxide emissions, but for years there has been one big problem: batteries. The batteries currently used in electric cars have an average range of only 85 miles, hardly enough to make electric cars practical for many Americans.

That’s why Assistant Professor Weiyang Li of Thayer School of Engineering is taking a different approach in her work on developing batteries for cars and other purposes—an approach she says could help increase the range of electric cars up to 500 miles between charges.

Li, known to friends as "Fiona," works at the leading edge of energy storage—developing more efficient, less expensive batteries with higher energy densities. A step in this direction is her work on lithium-sulfur (Li-S) batteries.

Li says that combining lithium and sulfur is a novel approach for a battery and offers significant advantages over conventional systems. In a Li-S battery, the cathode—the positive terminal—is sulfur, an element that is relatively inexpensive and can be recovered from petroleum. It replaces the high-cost lithium cobalt oxide or other high-cost metals and compounds typically used in the cathode.

Beyond the cost savings, Li says that the amount of energy that can be stored in a Li-S battery is more than five times greater than the batteries now used in cell phones or most electric cars. With this new kind of battery, the cars' range could be as much as 500 miles.

Li’s new battery is still on the lab bench, but it has significant potential for the future of automobiles, laptops and other electronic devices. It may also find a home on the electric power grid, offering large-scale energy storage, particularly energy generated by alternative sources such as solar and wind—energy that could be stored and then released when the wind stops and the sky darkens.

“I also want to develop battery materials to take the place of the high-cost lithium in batteries,” she says. “It may be possible to use other earth-abundant metals, including sodium or magnesium or even aluminum. That is the direction I am planning to explore at Dartmouth.”

Li is concerned about the recent rash of lithium battery fires. After many recharging cycles, threads of lithium often sprout from the anode, penetrate the separator, and reach out to the cathode, short-circuiting the battery and causing fires. She has already found some materials within the battery itself that could be employed in suppressing the growth of these filaments.

In yet another direction, Li is looking at enhancing energy conservation in the face of global warming. She wants to develop catalysts to enable electrochemical reactions that could convert greenhouse gases, such as carbon dioxide, into fuels like ethanol or methanol.

“If we can transfer the CO2 to fuel, it will be converted from something harmful to the environment to something useful,” says Li. “I am planning to pursue this here at Dartmouth.”