Award-winning Ukrainian poet and translator Iryna Shuvalova, GR ’14, has been named a Gates Cambridge Scholar for 2016. 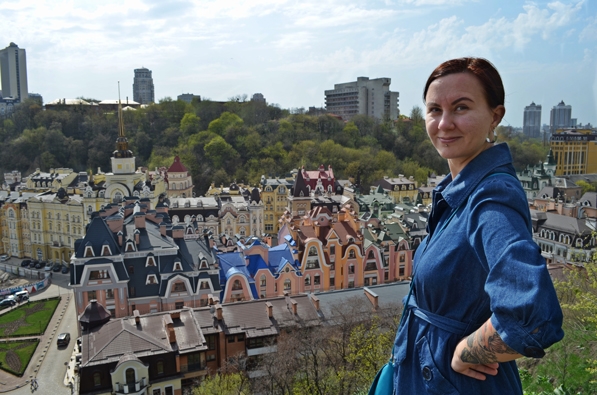 “Word, and poetic word in particular, is one of the least tangible and most powerful means of changing things around us and inside us,” says Iryna Shuvalova, GR ’14. (Photo courtesy of Nata Koval)

Shuvalova plans to earn a PhD in Slavonic studies, focusing on how armed conflict and post-conflict trauma have informed the Ukrainian oral poetic tradition.

The Gates Cambridge Scholarship was created in 2000 through an endowment gift from the Bill and Melinda Gates Foundation to Cambridge University that aims “to build a global network of future leaders committed to improving the lives of others,” according to the program’s website. This year the program selected 90 scholars—35 from the United States and 55 from 30 other countries—to pursue advanced study at Cambridge.

Shuvalova is the third Dartmouth graduate to receive the award; Peter Sutoris ’11 and Ingrid Nelson ’05 received the honor in 2015 and 2005, respectively.

Of the scholarship, Shuvalova says, “I still can’t believe it. It is a great honor and a great responsibility. But my favorite way of viewing it, I think, is to see this scholarship as an immense opportunity to go out there and do things that I always wanted to do, while digging up something of real value for others.” At Cambridge, Shuvalova will study with renowned Ukraine scholar Rory Finnin.

The author of three collections of poetry, Shuvalova is also coeditor of the first of anthology of LGBTQ literature in Ukrainian, a project that involved coordinating more than 40 writers, translators, and scholars from 15 countries amid threats of violence from ultra-right activists.

She is currently finishing a fourth collection of poems, translating Virginia Woolf’s To the Lighthouse into Ukrainian, raising funds to support the publication of her translation of the poetry of Ted Hughes—the first translation of Hughes into Ukrainian—and “thinking of costumes my kid and I will parade in at this year’s Comic-Con in Kyiv.”

Shuvalova spent a year at Dartmouth as a Fulbright Scholar in the master’s of comparative literature program. “I already had my bachelor’s and a master’s in philosophy, and then I did a specialist’s degree in translation, but I had also been reading, performing, and writing poetry, and at some point my academic interests started drifting toward literature quite strongly,” she says. Unable to find a program in comparative literature in Ukraine, she looked abroad.

“I chose Dartmouth because I wanted to go to an excellent institution that could offer me a very intense program that could help me shape my further academic vision,” she says. “Dartmouth absolutely fulfilled that vision—more than fulfilled it. It was so cool actually studying literature in the classroom. I realized I’m where I need to be, and I’m doing something that I want to do. And I saw an inside dynamic of the best of an academic community, which was also a huge experience.”

“Iryna Shuvalova is a top-notch scholar as well as a poet,” says Michael Chaney, an associate professor of English who taught a seminar on wilderness in 19th-century American literature that Shuvalova calls “hands-down the best class I was ever enrolled in, period.”

“She is quite deserving of her recent accolades and her deep understanding of the political and theoretical implications of language shows through in every comment she ever offered in class and in every page of every paper she ever turned in,” Chaney says.

Shuvalova was in Hanover during much of the political unrest that marked the Ukraine that year—the “Revolution of Dignity” that overthrew the government of President Viktor Yanukovych, the Russian invasion of Crimea, and the beginning of the war in the east between Russian-backed separatists and the Ukrainian government.

“It was a very peculiar situation, because on the one hand, I was away, but on the other hand I was totally immersed in all of it, because everyone there was on my Facebook timeline,” she says. “In a sense, I knew what was going on there just as anyone in Kyiv would know, but I couldn’t be there.”

After Dartmouth, Shuvalova says, she toured Ukraine presenting two collections of poems published in 2014. During presentations on that tour and the conversations they generated, she says, “I started talking about the tradition of poetry about war, and the oral tradition as well. These discussions triggered a thought process that helped me formulate the questions I now seek to answer in my dissertation.”

Ukrainian culture and language have often been suppressed by outside forces, most recently under the rule of the Soviet Union. “Stalin’s policy opposed any kind of what was defined as nationalism, and speaking your own language was more or less nationalism. While the best representatives of the Ukrainian written literature were being shot or sent to gulags, the oral tradition allows us a glimpse of what the heavily censored and oppressed written tradition often could not or did not dare to express,” she says. “The oral tradition, the song and narrated epic poetry, is a tremendous source of those lost voices.”

“Word, and poetic word in particular, is one of the least tangible and most powerful means of changing things around us and inside us, and I am very glad that the Gates Cambridge Trust recognizes this power and supports research aimed at understanding it better,” Shuvalova says.

She is also grateful to her family for their support. “I would never be able to achieve the level of academic and social engagement enabling me to win this award if it were not for the constant support of my mother, who has always done everything she could, to let me pursue my dreams (even the wildest ones), and of my daughter, Maryana, who is a great friend and an inspiration in all I do,” she says.

“I’m delighted that Iryna has been recognized in this way. It’s an honor for her and for Dartmouth,” says Jessica Smolin, assistant dean for scholarship advising.

Smolin encourages students and alumni interested in applying for the Gates Cambridge scholarship and other competitive international awards to schedule an appointment with her, and to visit Dartmouth’s National Scholarships/Fellowships website.