Cynthia Huntington and Darrin McMahon are among 178 winners in the U.S. and Canada. 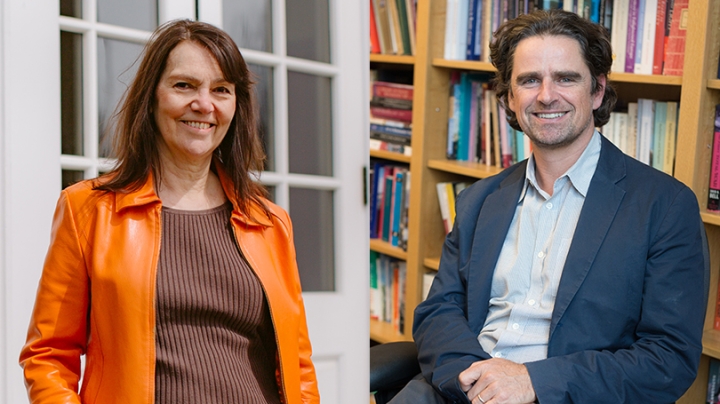 Cynthia Huntington, a professor of English and creative writing, and Darrin McMahon, the Mary Brinsmead Wheelock Professor in the Department of History, have been awarded prestigious Guggenheim fellowships.

The Guggenheims, which this year went to 178 scholars, artists, and scientists in the United States and Canada, are midcareer awards that offer fellows time to work on projects in their fields. Huntington and McMahon were selected from nearly 3,000 applicants “on the basis of prior achievement and exceptional promise,” according to the John Simon Guggenheim Memorial Foundation website.

“I am delighted that the Guggenheim Foundation has recognized Cynthia Huntington and Darrin McMahon for their achievements as well as the promise of their future contributions in their fields,” says Provost Carolyn Dever. “The recognition of these teacher-scholars is a sign of the great vitality of the humanities at Dartmouth.”

Dean of the Faculty of Arts and Sciences Michael Mastanduno praised Huntington and McMahon for their contributions to the College and to their fields of study. “Cynthia Huntington is a talented poet and acclaimed writer whose work has inspired Dartmouth students as well as the broader public, and Darrin McMahon’s ambitious and cross-disciplinary research reaches far beyond the academy. These two Dartmouth scholars are truly worthy of this international recognition,” Mastanduno says.

“I’m thrilled, as you can imagine,” says Huntington, who won a 2016 Guggenheim fellowship for poetry.

The Guggenheim will provide support as she finishes a book called Terra Nova, which Huntington calls “a long meditation on exile and migration (in geography and psyche),” scheduled to be published in early 2017. She will also turn her attention to “a long mixed-genre work (mostly prose poems, and prose fragments) focused on night—night, darkness, dreams and death, not quite the four horsemen,” she says.

“I don’t plan to travel too much, since I have everything I need right here to get the work done. Time is the great gift of this fellowship,” Huntington says.

The 2014 Poet Laureate of New Hampshire, Huntington was a 2012 National Book Award finalist for her book of poems Heavenly Bodies. Other works by Huntington include the acclaimed The Radiant, (2003), and The Salt House: A Summer on the Dunes of Cape Cod, (1999; paperback 2003).

McMahon, whose scholarly work focuses on the French Revolution, the European Enlightenment, and intellectual history, was awarded a Guggenheim fellowship in the category of intellectual and cultural history. “It is extremely gratifying to receive this award. I’m grateful both to the Guggenheim Foundation and to the many colleagues and institutions—not least Dartmouth—that have provided support and enabled me to work productively over the years,” he says.

McMahon was named the Mary Brinsmead Wheelock Professor in the Humanities this past October. His book Happiness: A History (2006) was translated into a number of languages and was awarded Best Book of the Year honors for 2006 by The New York Times, The Washington Post, and Library Journal.  In 2013, McMahon completed a history of the idea of genius and the genius figure, Divine Fury: A History of Genius, published with Basic Books.

He is currently working on a history of light in the Age of Enlightenment. In an interview with Dartmouth Now last fall, McMahon said, “Light is a central metaphor of the Enlightenment, and I’m interested in that, but also in the process going on at the same time—the practical challenge of lighting cities using public lighting. It’s a bit of a departure for me; I tend to do long-range intellectual history, and with this I’m looking at things like lantern technology and how you illuminate a city of 300,000 people.”

This year marks the 92nd annual Guggenheim Fellowship competition. In the rigorous selection process, applicants are first pooled with others working in the same field and examined by experts in that field. The recommendations are then weighed by a selection committee, which determines the number of awards to be made in each area.

Huntington and McMahon join 2014 fellow Peter Tse ’84, professor of psychological and brain sciences; and 2013 fellows Susannah Heschel, the Eli Black Professor of Jewish Studies in the  Department of Religion; and Cleopatra Mathis, the Frederick Sessions Beebe ’35 Professor of the Art of Writing in the Department of English, among current Dartmouth faculty so honored most recently.