An undergraduate works with professors to unlock doors to understanding science. 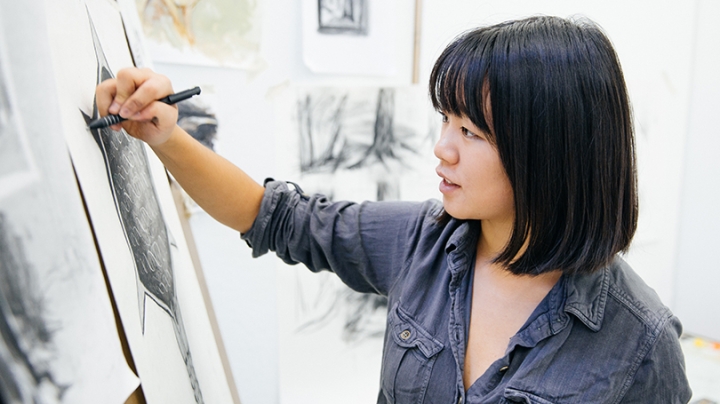 Amy Zhang ’17, a Dartmouth Stamps Scholar and a core member of the DALI Lab, makes use of art to explain science.

The New Jersey native brings the mysteries and magic of science to the public, using art to translate the technical. Zhang combines her talents as a visual artist with her academic pursuits as a biological sciences major.

She seeks out situations in which scientists are having problems communicating their work to colleagues or to the general public, problems that might benefit from the application of art. Then she works on solutions, creating, for instance, interpretive visualizations of microscopic organisms that have facilitated an understanding of their structure and function. She has also created an award-winning video to illustrate the potential of using light as medium of wireless transmission.

Zhang also looks for opportunities to apply her translational skills and talents. “I speak with members of the biology department, asking what their visualization challenges might be, what communication problems they have identified,” she says. “I am a bio major, so this is where I am most comfortable.”

These days, she is crafting animations of an ancient human ancestor in an effort to understand how they walked in the dim past.

“Amy is exploring how art can help communicate what science is and why science matters,” says Lorie Loeb, a professor of computer science, the executive director of the DALI Lab, and Amy Zhang’s Stamps Scholarship adviser.

As a Stamps Scholar, Zhang receives funding through a partnership between the Stamps Family Charitable Foundation and Dartmouth, an arrangement that enables undergraduates to pursue experiential learning during their junior and senior years.

As a member of the DALI Lab, Zhang is part of a group of students, staff, and faculty who focus on communicating complex ideas and data in meaningful ways, using a mix of technology and design.

“She is one of the most talented people I've encountered in a long time—smart, creative, and inquisitive—and a total joy to work with in the DALI Lab and as a Stamps Fellow,” says Loeb. “She has been meeting with people who work at that intersection, attending conferences and workshops, and working on projects that are in that same space.”

In the winter 2015 term, Zhang connected with Olga Zhaxybayeva, an assistant professor in the Department of Biological Sciences and an adjunct assistant professor of computer science. Zhaxybayeva was investigating gene transfer agents (GTAs). “This is some really cool science,” says Zhang. “It’s about bacteria domesticating viruses—the idea is that a viral mechanism has been co-opted by bacteria to use for their own gene transfer.”

Zhaxybayeva had been collaborating with Professor J. Thomas Beatty and members of his lab at the University of British Columbia. That team had conducted transmission electron microscopy and cryo-electron microscopy to obtain images of GTAs.

“The images are informative but very fuzzy, due to resolution issues,” Zhaxybayeva says. “Amy has taken these images, compared them to known viral images and structures, and made a strikingly beautiful GTA ‘portrait.’ ”

Zhaxybayeva is investigating how GTAs assemble, and what genes are responsible for both orchestrating the assembly and coding specific parts of a GTA particle. “The GTAs are extremely small and, though they resemble bacterial viruses, based on our work we concluded they are not,” she says. “We are trying to understand this interesting evolutionary connection.”

Based on what is known about GTA genes and corresponding viral counterparts, Zhang made a series of illustrations of the steps that are theoretically involved in the sequence of GTA assembly.

“This work produced several hypotheses on possible connections between genes and structures that I am following up on. This is extremely useful for my research, as we continue to study how bacterial cells produce GTAs,” Zhaxybayeva says.

Turning in a different direction, though still biologically based, Zhang is engaged in an ongoing project with Jeremy DeSilva, an associate professor of anthropology. She has been working on animating the walk cycle of Australopithecus sediba, an early human ancestor.

“We have proposed a hypothesis that Au. sediba walked with a hyper-pronating gait, based on its anatomy,” DeSilva says. Hyper-pronation is a condition where the foot rolls inward excessively when taking steps.

“I've found there is a lot of confusion and misunderstanding about what this gait would actually look like. It has been called ‘pigeon-toed,’ which is not correct. And ‘chimp-like,’ which is also not correct,” he says. “I needed someone who could work with animation software and to get the Au. sediba skeleton walking again.”

He says that Zhang turned out to be “the perfect person, with both the scientific and artistic skills to accurately model how a 2-million-year-old ancient human ancestor walked.”

Zhang has also worked with Xia Zhou, an assistant professor of computer science, to create a video that illustrates her research in using light as wireless transmitters. It took top honors in September 2015 as the best video at ACM MobiCom, an international conference on mobile computing and networking, in Paris.

“Our idea is to turn everyday lighting into accurate behavior sensors to sense what we do and how we behave,” says Zhou. “Amy did a fantastic job on making the video within a short amount of time.”

This summer, Zhang will be heading for the Smithsonian Tropical Research Institute in Panama, where she will be an intern at the institute’s Research Experience for Undergraduates program, working on a sleep and learning research project involving fruit bats and paper wasps.

Zhang hopes to continue in biological research, but she is also interested in artistic media and animation. Choosing just one might not be necessary. “I don’t think they are exclusive,” she says.