It’s not easy, being the drum major in a marching band. You often have to march backward while conducting musicians who are also moving around as they play. They need a leader who can establish the right tempo and hold them to it. 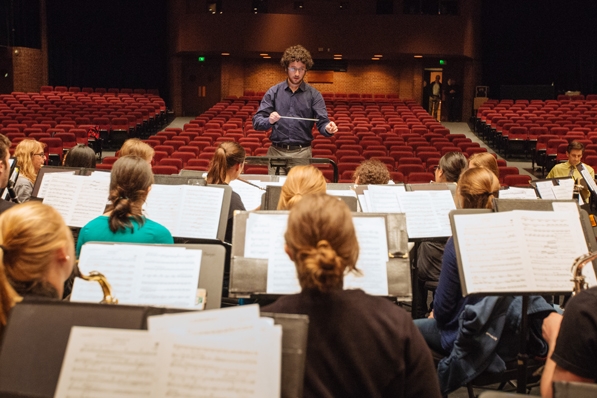 “I like conducting a lot because I like teaching,” says Jacob Weiss ’16. He’ll take the baton for his last concert at Dartmouth at 8 p.m. on May 7 in Spaulding Auditorium at the Hopkins Center. (Photo by Robert Gill)

Jacob Weiss ’16 kept that steady beat for three years in his high school marching band in Bainbridge, Wash. When he came to Dartmouth, he decided to major in computer science. But he never lost the urge to play his bass trombone, so he joined the Dartmouth College Wind Ensemble. That’s where his talents as a musician and conductor caught the attention of Matthew Marsit, director of bands at the Hopkins Center for the Arts and a lecturer in the department of music. Marsit has asked Weiss to conduct a challenging composition for the ensemble’s spring concert: Yasuhide Ito’s …yet the sun rises.

Ito’s work commemorates the devastating tsunami that killed more than 18,000 people in Japan five years ago. “I’ve never conducted a piece this complicated,” Weiss says. “In places it is really sparse; there are only a few instruments playing, so learning to zone into just a fraction of the ensemble and pick out what needs to be going on in that fraction is very difficult.”

Also difficult—changing tempos and time signatures frequently and smoothly in a minimalist but complex piece of music.

At a recent rehearsal, Weiss opens the score in his Ipad and gets to work on an especially tricky section. “Measure 164,” he announces as he raises the white baton. The flutes come in, making a rippling sound. Stopping them at the end of the passage, he offers gentle criticism. “It’s a little muddy right now,” he says, “and it should be more like clear water, right? A little stream that’s murmuring. Again, all right?”

“I like conducting a lot because I like teaching,” Weiss says. He’s also a gifted trombonist, says ensemble director Marsit. But Weiss finds conducting less physically taxing, and in some ways more rewarding, than playing an instrument. “You get to enjoy the music more because you see the big picture, and you seem to have a bigger hand in what’s going on,” he says. “But it’s not about control. It’s not as if you control the ensemble. It’s more about being able to say, I know what’s supposed to be happening pretty much everywhere in this piece of music, and trying to help the players express that. It’s really fun.”

Almost as much fun, Weiss says, as programming computers. Math doesn’t directly connect to his conducting or performing—“I don’t do digital music,” he says. But he has noticed that many musicians excel at math and science. “When you walk into the physics building, where I spend a lot of time, you see a lot of professors who play instruments.”

And, he says, a respect for numerical precision helps him manage the variable tempos in the Ito piece. “It starts small and gets big, but the whole piece is just a really persistent drive to the end, when the sun rises. It tells a story. Really incredible,” Weiss says.

Standing at the back of the rehearsal hall, Marsit smiles, clearly enjoying watching Weiss guiding a solo percussionist through a quiet section. “As a conductor he’s evolved a lot over three years,” says Marsit. Weiss has also taught and led middle schoolers in Dartmouth’s Youth Wind Ensemble, which invites young musicians from the Upper Valley to attend weekly rehearsals and play alongside college performers.

“Watching him on that podium, leading the young people, is electric,” says Marsit. “He brings to conducting a seriousness of intent and he understands the importance of sharing music with people.”

Marsit says it will be hard to fill Weiss’s shoes after he graduates this year. Dedicated, talented bass trombonists are hard to find, and conducting is not generally a skill mastered by undergraduates, even in music conservatories. But Marsit does not sound regretful about Weiss’s decision to make his living working with computers rather than musical instruments.

“If that’s where his primary passion is, I support it,” Marsit says. “As a computer programmer he will still be an advocate for the music industry. Most likely as an amateur performer, perhaps a board member of an ensemble, and definitely a ticket buyer. We need people to make music, but we also need people to appreciate it.”

As he builds a high-tech career, Weiss plans to keep making music. “Computer programming is where I will go in life, but I would love to continue playing and maybe find an ensemble, and if I am lucky enough, get a chance to conduct it.”

He’ll take the baton for his last concert at Dartmouth at 8 p.m. on May 7 in Spaulding Auditorium at the Hopkins Center for the Arts. 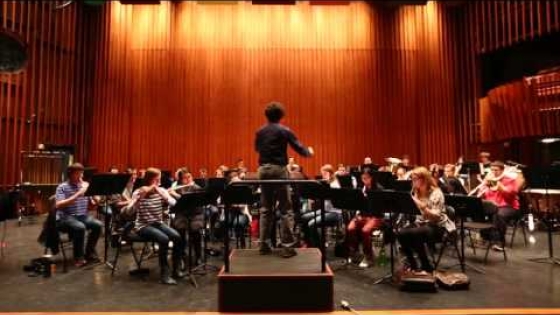