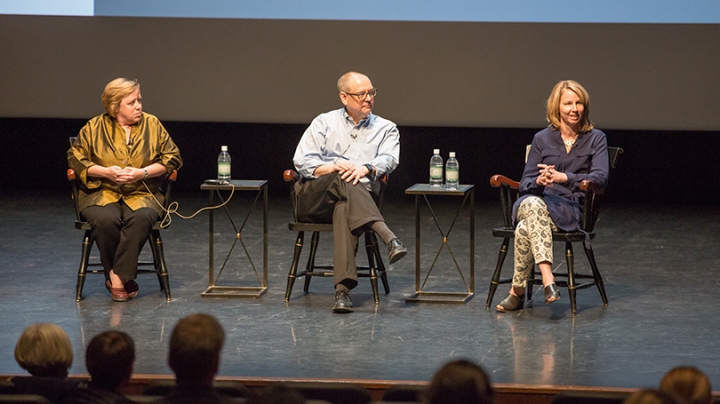 The results of a campus climate survey show that the majority of respondents across the Dartmouth community feel comfortable. However, some on campus feel the lack of a sense of belonging, said Denise Anthony, vice provost for academic initiatives.

Anthony presented the results of the Dartmouth Community Study survey, which students, faculty, and staff took in October, to about 150 community members, most of them staff, at a town hall meeting on May 11, hosted by Executive Vice President Rick Mills, that included a financial presentation by Chief Financial Officer Mike Wagner.

Mills began the session with a clip from a film by movie maker Ken Burns about Vermont physician Horatio Nelson Jackson, an early automobile pioneer who with another man drove across country in the first transcontinental trip in a “horseless carriage,” to the incredulity of naysayers.

Jackson’s determination to finish his journey despite obstacles, real and virtual, along the way is akin to Dartmouth’s efforts to make its campus more inclusive and welcoming to all, Mills said. And, he added, the College won’t be deterred if initial efforts don’t succeed as planned.

Anthony said the survey results showed some clear strengths, for example, that 70 percent of faculty, staff, and students rated the overall campus climate as “very comfortable” or “comfortable.” But the data also showed that the Dartmouth experience is not the same for all members of the community, with 21 percent of respondents indicating that they had experienced “exclusionary, intimidating, offensive or hostile conduct” in the past year.

Diversity and inclusion are important topics that all of American society is dealing with right now, she said.

The survey is one of a pair of efforts underway to increase diversity and make all members of the community feel welcome and included in campus life. In addition to the Community Study, a plan of action will be announced at the end of this month in the Inclusive Excellence effort, launched in February to address gaps in action, accountability, coordination, and communication in creating a healthy, safe, and nondiscriminatory campus environment.

Provost Carolyn Dever, who answered questions at the meeting along with Anthony and Mills, said many at the College are working diligently to improve the campus climate.

Several students attending the meeting questioned the College’s commitment, saying there had been studies in the past, but concrete actions had not been implemented as a result of the studies.

“When is the administration going to start caring about students and faculty and staff of color beyond statistics?” asked one student.

Mills replied that “given the history of numbers of reports, we need to translate action into change on campus.”

Dever told the students that their concerns are “what we’re trying to help understand and address. Your experiences on this campus are of intensive concern to us, and all of us up here, and all of the people I work with each day, are going to help.”

No one is happy about the data that say there are people on campus who don’t feel included or supported, Anthony said. “I am here as a faculty member and an administrator to think about and help all of us work on how we are going to change that. I don’t think it is a one-time action. It takes the concerted, collective efforts of all of us,” she said.

Additional forums are scheduled over the next two weeks to discuss the survey results and information related to the Inclusive Excellence effort.

In his presentation, Wagner showed the audience budget figures for the current fiscal year and for the new year, which begins July 1. He explained several projects in the works, including a peer review of the College’s procurement system, financial modeling for the next fundraising campaign, and a review of how budgeting is done across the institution.

The next town hall meeting is Sept. 14 at noon in Spaulding Auditorium.