‘For Colored Girls’ Gives Voice to Women’s Struggles and Joy 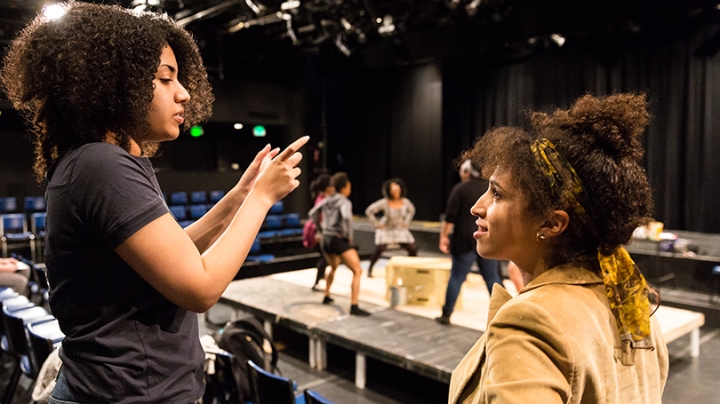 Theater major Carene Mekertichyan ’16, left, and director Deena Selenow discuss a scene during a rehearsal of For Colored Girls Who Have Considered Suicide When the Rainbow is Enuf, which opens at 8 p.m. Friday in Bentley Theater at the Hopkins Center. (Photo by Joshua Renaud ’17)
5/11/2016
Body

Carene Mekertichyan ’16 has wanted to produce Ntozake Shange’s classic play For Colored Girls Who Have Considered Suicide When the Rainbow Is Enuf since she came to Dartmouth four years ago.

“It’s one of those works of theater that I have always loved,” says Mekertichyan, a theater major from Los Angeles. “It has always spoken to me as a black woman. When I saw students producing senior theses in the theater department, I thought, wow, I would love to bring a production of Colored Girls to Dartmouth.”

That dream becomes a reality this weekend. The show—Mekertichyan’s honors thesis—opens Friday in Bentley Theater at the Hopkins Center for the Arts. One of a cast of seven women of color, Mekertichyan plays the role of the “Lady in Red” and serves as the production’s dramaturge.

Shange’s choreopoem—a collection of poems performed in words and movement—presents voices of African American women and their experiences of love, loss, grief, and joy. A girl from 1950s St. Louis falls in love with a Haitian revolutionary from the 1790s. A woman learns that her partner has given her HIV. Another confronts the fear and isolation of life in 1970s Harlem. Other characters face the trauma of rape and domestic violence. Still others experience the power of rejecting unsatisfying relationships, the pleasures of dance and community and storytelling.

Guest director Deena Selenow—who last year was named a “Person to Watch” by American Theater Magazine—is helping Mekertichyan bring her vision to the stage, thanks to the theater department’s VOICES initiative, which supports the presentation of works by and for artists from underrepresented communities.

“Carene originally wanted to direct it and act in it, and we persuaded her that she could concentrate more fully on the acting as well as the dramaturgical work,” says Associate Professor of Theater Laura Edmondson, one of Mekertichyan’s thesis advisers. “It’s a chance for her to hone her critical chops as well as her artistic ones.”

“When you spot somebody like Carene who has a vision, you do everything you can to support that vision,” says Director of Theater Jamie Horton, an associate professor of theater who is also Mekertichyan’s adviser. “We want to give her all the resources that we can to promote that and to make her the kind of theater artist who can leave Dartmouth and go out and make a real difference.”

Horton found Selenow by putting out the call for a director to the department’s alumni network. Marina McClure ’04, a classmate of Selenow’s from the CalArts MFA program, recommended her for the job.

“Deena Selenow is an up-and-coming director who’s been quite recognized already in her work,” says Horton. “We’re thrilled to have her here.”

Among other accomplishments, Selenow has directed Riot/Rebellion for the Watts Village Theater Company in association with the Latino Theater Company at the Los Angeles Theatre Center; adapted and directed Toxicos at the REDCAT New Original Works Festival in LA; and directed Ruth McKee’s In Case of Emergency for the Chalk Repertory Theatre.

“Her vision aligns with mine,” Mekertichyan says of Selenow. “She’s able to think of things I can’t even think of. It’s so exciting to get to work with her.”

Mekertichyan and Selenow bring a contemporary sound and feel to the production while staying true to the work’s original ethos.

“I met with Oz Scott, who was the original director,” Selenow says. “It was wonderful to listen to someone who was there as this pile of poems was put together into an arc. He pushed on the point that it’s about these women”—the current cast members themselves—“and what they can bring to the poems. So that’s what I’m trying to push them to do.”

The cast includes several actresses who have never participated in theater department productions before. Buki Sihlongonyane ’18, who plays “Lady in Purple,” says she was drawn to Shange’s poetry and its social message.

“I’d never done anything like it, and it’s been one of the best experiences of my life,” Sihlongonyane says. “I’ve gotten to push myself in ways that I had never have before, and bond with a bunch of wonderful women of color. It’s just been a wonderful experience.”

Christina Ragin ’17, a former leader of the Black Underground Theater Association (BUTA) who plays “Lady in Yellow,” describes rehearsals as “emotionally grueling but really rewarding. Everyone is pitching in to help everyone else.”

“A lot of these stories resonate with us,” she says. “But although it says ‘for colored girls,’ these are things that other people can relate to, and that’s something we want to share.”

Jovanay Carter ’19, “The Lady in Green,” says, “This has been the highlight of my freshman year, just coming into a room with a bunch of women who want to express themselves through their bodies and their emotions.”

The experience is leading Carter to consider a minor in theater. “This isn’t even for a grade—I’m doing this just to do it, and it’s great,” she says.

For Mekertichyan, the show has been “more than I could have expected. It’s more intense than anything I’ve ever done. I’m getting to really express everything that I’ve wanted to express. What makes me so happy is knowing that this will have an impact. I will have left a legacy on campus through this production.”

The VOICES Initiative: Bringing Diversity to the Stage

Mekertichyan’s production is one of several VOICES projects planned for the next three years—including a Main Stage production of Lynn Nottage’s award-winning Intimate Apparel in the fall.

The theater department hopes eventually to add a third Main Stage production to its annual season, one dedicated to minority voices. “There is a whole range of work that’s not being done on a regular basis,” says Dan Kotlowitz, the Leon E. Williams Professor of Theater and chair of the theater department. “We want to take a third of our Main Stage production process and focus on these productions, to make them a foundational part of the program, and a visible way to share these cultures.”

The VOICES initiative, designed to bring greater diversity to Dartmouth’s stages, has received funding from the Office of the Provost through the 2017-2018 academic year. The theater department hopes to find a permanent source of funding for it.

For Colored Girls Who Have Considered Suicide When the Rainbow Is Enuf runs this Friday and Saturday at 8 p.m. in Bentley Theater, with a Sunday matinee at 2 p.m. Tickets are $2. 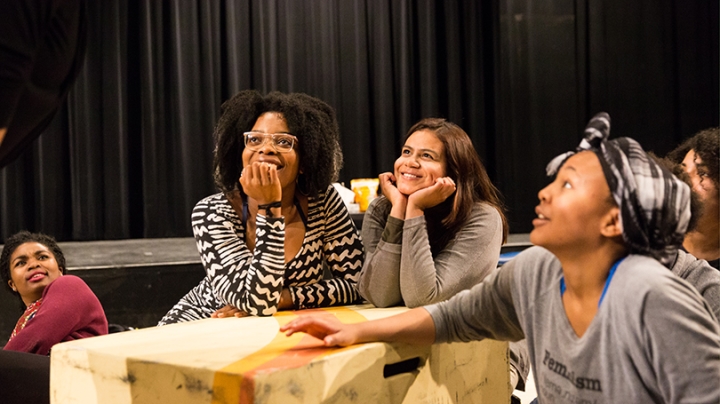