Come to Think of It—or Not: How Memories Can Be Forgotten

Dartmouth researchers have shown how one can deliberately “forget” unpleasant memories. 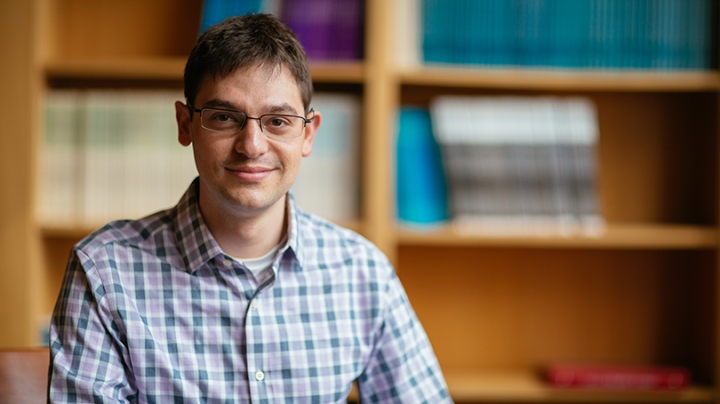 “It’s like intentionally pushing thoughts of your grandmother’s cooking out of your mind if you don’t want to think about your grandmother at that moment,” Dartmouth’s Jeremy Manning says. (Photo by Robert Gill)
5/25/2016
Body

Context plays a big role in our memories, both good and bad. Hearing Bruce Springsteen’s Born to Run on the car radio, for example, may remind you of your first love—or your first speeding ticket. Either way, a new Dartmouth- and Princeton-led brain scanning study may be of interest: The study shows that people can intentionally forget their experiences by changing how they think about the context of those memories.

The study, which appears in the journal Psychonomic Bulletin and Review, has

a range of potential applications centered on enhancing desired memories, such as developing new educational tools, or diminishing harmful memories, including treatments for post-traumatic stress disorder.

Since ancient Greece, memory theorists have known that people use context—or the situation they’re in, including sights, sounds, smells, where they are, who they are with—to organize and retrieve memories. But the team of scientists wanted to know whether—and how—people could intentionally forget certain experiences.

They designed a functional magnetic resonance imaging (fMRI) experiment to specifically track thoughts related to memories’ contexts, and put a new twist on a centuries-old psychological research technique of having subjects memorize and recall a list of unrelated words. In the new study, researchers showed participants images of outdoor scenes, such as forests, mountains, and beaches, as they studied two lists of random words, manipulating whether they were told to forget or remember the first list prior to studying the second list.

“Our hope was the scene images would bias the background, or contextual, thoughts that people had as they studied the words to include scene-related thoughts,” says lead author Jeremy Manning, an assistant professor of psychological and brain sciences at Dartmouth. “We used fMRI to track how much people were thinking of scene-related things at each moment during our experiment. That allowed us to track, on a moment-by-moment basis, how those scene or context representations faded in and out of people's thoughts over time.”

The study’s participants were told to either forget or remember the random words presented to them interspersed between scene images. Right after they were told to forget, the fMRI showed that they "flushed out" the scene-related activity from their brains.

“It's like intentionally pushing thoughts of your grandmother's cooking out of your mind if you don't want to think about your grandmother at that moment,” Manning says. “We were able to physically measure and quantify that process using brain data.”

But when the researchers told participants to remember the studied list rather than forget it, this flushing out of scene-related thoughts didn't occur. Further, the amount that people flushed out scene-related thoughts predicted how many of the studied words they would later remember, which shows the process is effective at facilitating forgetting.

The study has two important implications. “First, memory studies are often concerned with how we remember rather than how we forget, and forgetting is typically viewed as a ‘failure’ in some sense, but sometimes forgetting can be beneficial, too,” Manning says. “For example, we might want to forget a traumatic event, such as soldiers with PTSD. Or we might want to get old information ‘out of our head,’ so we can focus on learning new material. Our study identified one mechanism that supports these processes.”

The second implication is subtler but also important, the researchers say. “It’s very difficult to specifically identify the neural representations of contextual information,” Manning says. “If you consider the context you experience something in, we're really referring to the enormously complex, seemingly random thoughts you had during that experience. Those thoughts are presumably idiosyncratic to you as an individual, and they're also potentially unique to that specific moment.

“So, tracking the neural representations of these things is extremely challenging because we only ever have one measurement of a particular context. Therefore, you can't directly train a computer to recognize what context ‘looks like’ in the brain because context is a continually moving and evolving target. In our study, we sidestepped this issue using a novel experimental manipulation—we biased people to incorporate those scene images into the thoughts they had when they studied new words. Since those scenes were common across people and over time, we were able to use fMRI to track the associated mental representations from moment to moment.”

The study, which included scientists at Bard College and the University of Illinois at Urbana-Champagne, received support from the John Templeton Foundation, the National Institutes of Health, and the National Science Foundation.