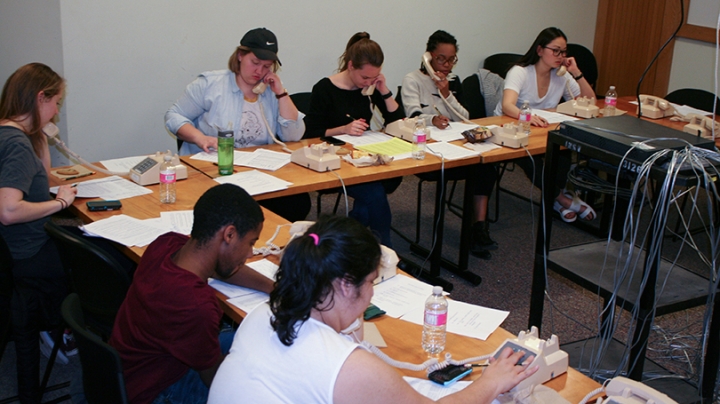 Students at the Rockefeller Center’s Class of 1964 Policy Research Shop conduct phone surveys for the 2016 State of the State Poll in April, questioning New Hampshire voters about their opinions on the presidential, congressional, and state elections as well as on a range of issues such as immigration, gun control, and the opioid crisis. (Photo courtesy of Ronald Shaiko)
5/13/2016
Body

A presidential match-up pitting presumptive party nominees Democrat Hillary Clinton against Republican Donald Trump shows Clinton with a narrow lead in New Hampshire, according to a poll by the Nelson A. Rockefeller Center for Public Policy at Dartmouth.

But Clinton’s Democratic challenger, Sen. Bernie Sanders, has a 20-point advantage over Trump in the state, a point the Vermont senator points to often as he continues to battle for delegates in the primary elections.

In addition, New Hampshire Republican U.S. Sen. Kelly Ayotte has a slight edge over Granite State Gov. Maggie Hassan, a Democrat, in a 2016 U.S. Senate matchup. Political analysts say this race could be key in deciding whether Democrats or Republicans control the Senate after the November elections.

“The poll results for both the presidential race and the contest for the U.S. Senate seat clearly identify New Hampshire as a battleground state in the 2016 election cycle,” says Professor Ronald Shaiko, senior fellow and associate director of curricular and research programs at the Rockefeller Center. “We can expect a great deal of attention to be paid to the state in terms of national media coverage as well as a significant influx of outside money into the state on behalf of and in opposition to candidates in both races."

These findings, highlighted in state and national headlines, were among the results of the Class of 1964 Policy Research Shop’s ninth annual New Hampshire State of the State Poll, designed, administered, and interpreted by public policy students from the Rockefeller Center’s Policy Research Shop. The poll assesses voter opinions on issues ranging from refugee resettlement and gun laws to job performance ratings for elected officials and the state of the economy in New Hampshire and in the nation.

“We as faculty serve as guides in the process. We make sure that the methodology is correct, but we allow the students to take ownership in the collection, interpretation, and presentation of the poll results,” says Shaiko, who oversees the Policy Research Shop.

Apoorva Dixit ’17, part of the team of students who designed the survey questions, crunched the numbers, and wrote the final report, says her team worked from a basic framework of questions from past years, but also devised new questions based on current events and critical issues in the state.

The State of the State poll is one way that students translate theory into practice. Most of the work of the Policy Research Shop is to produce research briefs and provide testimony to policy makers in New Hampshire and Vermont. Two recent examples include briefs on “The Value of Lake Champlain: An Economic and Environmental Analysis,” presented by Dartmouth students to the Vermont House Committee on Fish, Wildlife and Water Resources, and “Establishing a Drug Dealer Registry in New Hampshire,” a Policy Research Shop student presentation to the New Hampshire House of Representatives Committee on Criminal Justice and Public Safety.

“I was excited to do the State of the State Poll, especially right now in a very heated election season. I was really interested to see how people become more polarized during an election season, even in their opinions on other issues,” Dixit says.

For example, respondents were asked whether they support the resettlement of refugees in the United States and in New Hampshire.

On the topic of resettling refugees in New Hampshire, 49.6 Democrats are in support, compared to 13 percent of Republicans and 38.5 percent of independents.

“What was fascinating, though, was that the opioid problem was one of the issues on which we really didn’t see that divide,” Dixit says. “With almost every other issue, there’s very much a Republican take, a Democratic take, and an independent take to it.”

Megan Mishra ’17, another designer of this year’s poll, says the experience has taught her to be more critical of policy proposals and of politics in general.

“I think, looking from the outside, you might say there is a perfect solution to any problem,” Mishra says. “But then, I think working in the Policy Research Shop has taught me to analyze potential policy options from a variety of perspectives. You can really see that there are always positives and negatives to any system that’s currently in place, and any proposal that you might put forward.”

That’s exactly the point, says Andrew Samwick, the Sandra L. and Arthur L. Irving ’72a P’10 Professor of Economics and director of the Rockefeller Center.

“The annual State of the State poll, like all of the experiential learning opportunities available through the Class of 1964 Policy Research Shop and the Rockefeller Center, adds both intellectual depth and real-world impact to a liberal arts education at Dartmouth,” Samwick says.

The full State of the State Poll results are available on the Rockefeller Center website.