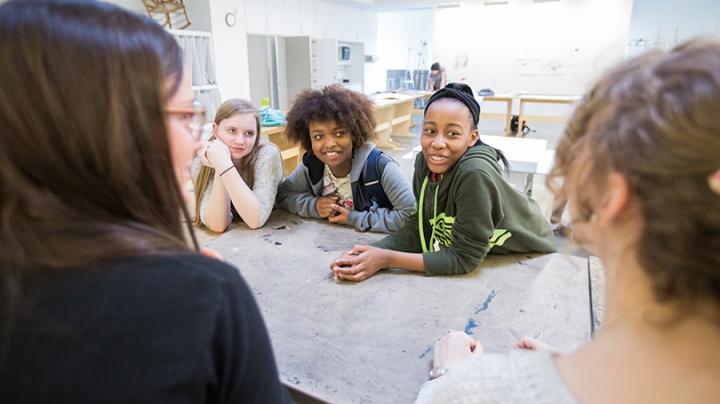 As a fundraiser for the St. Marcus School in Milwaukee, Quinton Klabon ’09 doesn’t make a lot of money. However, he says, that doesn’t matter, because he loves his job. “It’s the best school for low-income black kids in Wisconsin,” Klabon says, “and we work hard to transform their lives.”

Klabon wants highly motivated St. Marcus students to have the same Ivy League education he got. But for this to happen, he says, they need to start “dreaming and planning” early, before they enter high school. So in early May, he instigated and organized a rarity at Dartmouth—a campus tour for middle-schoolers.

A full schedule for the two-day tour kept Klabon, another chaperone, and seven eighth-graders on the run, crisscrossing the campus. The students—Jatavia Freeman, Ashley Joe-Fuqua, Joana Armstead, Jolie Isabell, Jalynn Tolbert-Jones, Akira Katherine, and Brielle Miles—didn’t just poke their heads into classrooms. They attended whole classes, including “Religion and the Civil Rights Movement,” taught by Randall Balmer, the John Phillips Professor in Religion.

The seven girls took lots of notes as Balmer gave a PowerPoint lecture about the sit-ins, marches on city hall, and boycotts of downtown merchants in the segregated city of Birmingham, Ala., that made headlines in the spring of 1963. He ended by screening a PBS documentary showing nonviolent protesters flushed out of streets with police dogs and high-powered fire hoses, and dragged to jail.

When Balmer opened the discussion, the St. Marcus students were the first to raise their hands. “Our younger generation—you guys are old—are probably the most aware of civil rights history because we have it at our fingertips, on our iPhones,” said Joana Armstead. “We’ve got all this technology about it, so we may be the most impactful Americans trying to change the culture.”

A St. Marcus staffer and chaperone for the trip, Katie Hein, noted that racial discrimination is still a reality in parts of Milwaukee. “Our kids can talk to you about what happens on their block every day. It’s history for us, but also present-day in a lot of places in this country.”

“So how will you change that?” Balmer asked the eighth-graders.

“I would say it starts with education,” said Armstead, “having more African Americans get into more colleges like Dartmouth, so they can get into government.”

From the front row, Ebony Smith ’18 chimed in. “Just being in this class and taking engineering classes, I am not just here for myself. I am here for the many more after me, and so this all hits home for me, being part of a family that never went to college.”

During their visit, the St. Marcus group chatted with Smith and other college students as they attended classes in government, literature, economics, psychology, folklore, math, environmental science, judicial writing, and studio art. Dartmouth provided lodging at the Hanover Inn, plus meals, including lunch with Jay Davis, director of the First-Year Student Enrichment Program (FYSEP), and James Washington, director of admissions for outreach and visitor programs.

“We seldom see field trips of this kind, with students this young, come to campus,” said Washington. “But there is a growing understanding that if we are going to make college more accessible, especially to low-income and first-generation students, our recruitment needs to start early.”

Washington was impressed by the students’ focus and maturity. “These are students gifted with smarts, and we are partnering with Quinton to help them apply their gifts,” he said.

Three student leaders from FYSEP also met with the St. Marcus scholars. Micah Daniels ’18, a FYSEP intern from a Navaho reservation in southern Utah, told them coming to Dartmouth from the Midwest might be a bit of a culture shock at first. For instance, she said that “there are no trees where I live, and New England feels a little claustrophobic.” But she got used to that, she said.

At the end of the first jam-packed day, Klabon reflected on the importance of the campus tour. “The reason that we are here is so that they can really picture what it is they are aiming for, and what they have to do to get here,” Klabon said. He predicted that at least half of the visitors would apply to his alma mater. “Some discovered they liked a small college town and environment,” he said, “and they all admired how kind and generous every single person was.”

This is not the last field trip of the academic year for his young companions. Their next destination: Birmingham, so they can see the Civil Rights Institute, featured in Balmer’s lecture, for themselves.