A team of engineering students in an introductory class have come up with a device that they hope will collect data on runners’ injuries—and perhaps keep them from happening. 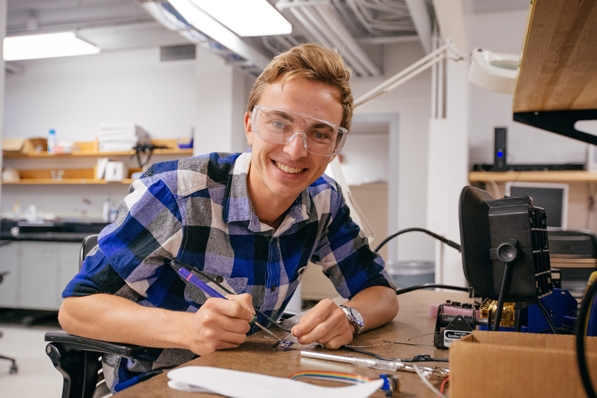 The hardware part of the device, called SmartSole, is placed under the insole of a running shoe and is fitted with a series of pressure sensors. The plan is for the sensors to send a picture of the runner’s foot hitting the ground to an app—now in development— that will organize the information in a way that could explain how a runner injures a foot.

“We have a SmartSole prototype and are building the app to interface with the device,” says Robert Halvorsen ’17. “By the end of the spring term we should have a complete package for testing and evaluation by athletes, including a few members of the Dartmouth Endurance Racing Team.”

It's Not the DALI You're Thinking Of

But at this stage, only half the problem is being addressed. The prototype has been created for the right foot. Making this a two-foot solution will add another layer of complexity Halvorsen and his team are not yet ready to undertake.

“We probably should go to a two-footed system but that’s not among our immediate priorities. We want to develop the right foot sufficiently to justify adding the left,” he says.

Halvorsen worked with classmates Pranav Vangala ’17, Sam Gallagher ’17, Daniel Lee ’17, and Tucker Hopkins, a Middlebury College student who is enrolled in the dual-degree program at Thayer School of Engineering. (The dual-degree program enables students at other colleges to study engineering at Dartmouth. Participants spend their junior or senior year at Dartmouth, receive a bachelor's degree from their home school, and then return to Dartmouth to complete a fifth year of engineering studies and earn a bachelor of engineering degree.)

The student group, led by Halvorsen, came up with their idea during an engineering class when they learned that the non-contact sport of running leaves runners with quite a few injuries. The National Center for Biotechnology Information, part of the National Institutes of Health, reports that in any given year about half of all people who regularly run will to sustain some sort of injury.

“You’d think this would be pretty safe, but that’s not the case,” says Halvorsen.

He and his classmates started looking for runners’ injuries they could identify and isolate and then build a device that would addresses particular injuries. But they found that the running community had no database on injuries. Confounded by the absence of data, “we thought, why not be the source of these data,” Halvorsen said.

Thus, SmartSole was born. In addition to the work on the engineering side, Halvorsen has taken the lead in fundraising.

As a Stamps Scholar, he is receiving funding through a partnership between the Stamps Family Charitable Foundation and Dartmouth, an arrangement that enables undergraduates to pursue experiential learning during their junior and senior years.

In last spring’s edition of The Pitch, Halvorsen and his SmartSole partners took third place, winning $1,000. In The Pitch, sponsored by the DALI Lab and the Dartmouth Entrepreneurial Network, students seek project funding by presenting their ideas to a live audience and a panel of judges.

“SmartSole first came to the DALI lab as a continuation of an “Introduction to Engineering” student-initiated project, but soon it evolved into a multidimensional development that brings in aspects of electrical engineering, computer science, and digital art,” says Shuoqi Chen ’18, a graphic designer and developer at DALI.

Halvorsen is pursuing a patent for SmartSole.

“Going commercial is definitely not off the table, but making money is not our primary goal. Ultimately we will have something that can either be taken on by someone who would make it commercial or at that point we might pursue it as a business ourselves,” he says. “Either way I would like to see this device put in the hands—or under the feet—of the people who are going to use it and can derive the most benefit from it.”