Creative collaboration transcends the bricks and mortar of the Arts and Innovation District. 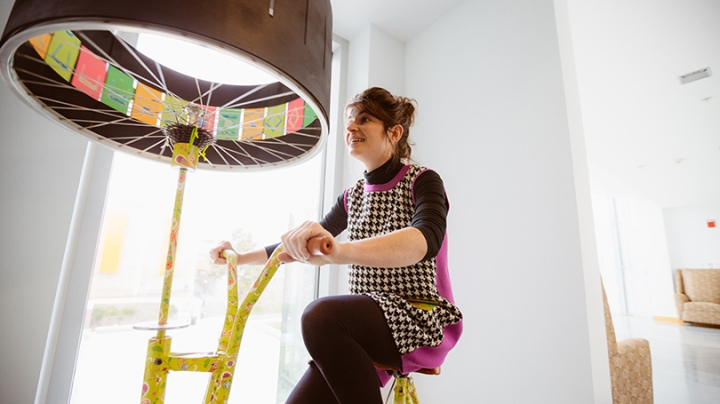 Black Family Visual Arts Center equipped with a zoetrope that allows the rider to view an animated film. The bike was built with the help of students from Thayer School of Engineering. (Photo by Robert Gill)
5/02/2016
Body

There’s a vibrant block in the heart of Hanover bordered by East Wheelock, Lebanon, South Main, and Crosby Streets that President Phil Hanlon ’77 has designated the Arts and Innovation District. The obvious architectural anchors are the Hopkins Center for the Arts, the Hood Museum of Art, the Black Family Visual Arts Center, and the DEN Innovation Center. But the building blocks of creative collaboration transcend bricks and mortar, says Maria Laskaris ’84, special assistant to the provost for arts and innovation.

“Through its roles as classroom, laboratory, and public cultural square, the district is an ideal launch pad for creativity and collaboration all across campus—not just in this neighborhood,” Laskaris says. Much of that creativity and collaboration culminates in a wide array of events taking place during spring term—and especially concentrated in the month of May. Laskaris and faculty and staff from across the district having been having conversations about how to highlight the work being done here at Dartmouth. Their name for the wide range of creative work happening in a variety of genres: made@dartmouth.

Laskaris says the arts are inherently interdisciplinary, and that means traditional barriers across fields of study are always coming down, providing a wealth of exciting opportunities for cross-campus collaboration. As an example, she cites a discussion about digital rights and the arts recently held at the DEN Innovation Center. Panelists included Michael Casey MA ’92, the James Wright Professor of Music and a professor of computer science; Mary Flanagan, the Sherman Fairchild Distinguished Professor in Digital Humanities and a professor of film and media studies; Maria Schneider, a Grammy-award-winning musician who performed recently at the Hopkins Center; and Mark Righter, senior university counsel for New York University. Tillman Gerngross, Thayer School of Engineering professor and associate provost of the Office of Entrepreneurship and Technology Transfer, moderated the discussion.

Casey explained how his work draws on both computer science and music history. He composes electronically, working with bits and pieces of music he has taught his computer to find and analyze. “I started to invent machine listening technologies that can listen to a million sounds and automatically tag them, so I can sort of use them as an orchestra,” he said.

The confluence of art and science is becoming more and more common throughout Dartmouth. For example, in a hallway in the Black Family Visual Arts Center, Jodie Mack, an associate professor of film and media studies, points out an unusual bicycle with a cylinder called a zoetrope mounted on the handlebars. It shows short animations as the rider pedals. “We collaborated on that with Thayer School of Engineering,” Mack says.

Mack creates handmade 16mm films that use recycled materials to explore the boundary between abstract art and mass-produced graphic design. Her work has been screened at festivals all over the world. Mack says she wants Dartmouth’s reputation for unusual and collaborative art work to be better known.

“We have a rich history of the avant-garde that is kind of hidden,” Mack says. She likes the made@dartmouth campaign—and in fact helped come up with the name. “It will be a great hashtag for social media.”

It will also soon be the banner for a new corner of the College’s website. Current made@dartmouth listings kicked off last weekend and end with the screening of seniors’ culminating work in film and media studies on May 31. The month’s highlights include an exhibit of work by senior studio art majors; a plethora of plays, dance concerts, a digital arts expo, and the first annual Turing Tests in Creative Arts competition.

“The creativity of our students will be in full bloom throughout the month of May,” Laskaris says. “It’s wonderfully inspiring and not to be missed.”