The professor of biological sciences is honored for her scientific research. 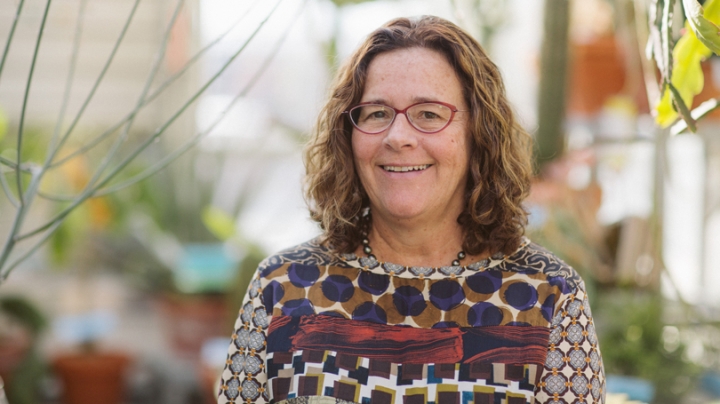 Professor Mary Lou Guerinot is best known for her work on how plants take up metals from the soil, with the goal of making food more nutritious. (Photo by Robert Gill)
5/04/2016
Body

Mary Lou Guerinot, a professor of biological sciences, has been elected to the National Academy of Sciences (NAS).

Guerinot is one of 84 new members and 21 foreign associates from 14 countries elected “in recognition of their distinguished and continuing achievements in original research,” NAS said in its May 3 announcement.

“My first reaction was total surprise, and then I started getting all the emails and phone calls,” says Guerinot. “It’s a great honor, but I must say that it’s not just due to the work I did. It’s really a team effort. I have to thank all my grad students, postdocs, and undergrads who have worked on the projects over the years.”

“Mary Lou Guerinot exemplifies the best of our Dartmouth faculty, and this is a well-deserved honor,” says Provost Carolyn Dever. “She has led her field in conducting research into sustainable solutions to world hunger while also gaining recognition as a teacher and mentor to future generations of scientists.”

Guerinot has published more than 115 scholarly articles, and her work is funded by major grants from the National Science Foundation and the National Institutes of Health. In her lab at Dartmouth, she has trained 19 PhD students and over 100 undergraduates, 35 of whom have completed honors theses with her.

She is best known for her work on how plants take up metals from the soil, with the goal of making food more nutritious.

“Over the years we have been chipping away at that, and I’ve started using some newer techniques,” says Guerinot.  “We look at the elemental composition of plants and try to find plants that have more or less of certain elements, and then, using different genetic techniques, we can figure out what genes are causing those differences.”

She has been investigating how iron migrates into plants and has identified key genes involved in this process. Her investigations are providing an integrated picture of the genes involved in the selective accumulation of essential minerals. Her work also has applications for environmental remediation with the goal of using metal-accumulating plants to remove toxic metals from the soil.

The National Academy of Sciences is a private, nonprofit institution that was established under a congressional charter signed by President Abraham Lincoln in 1863. It recognizes achievement in science by election to membership, and—with the National Academy of Engineering and National Academy of Medicine—provides science, technology, and health policy advice to the federal government and other organizations.