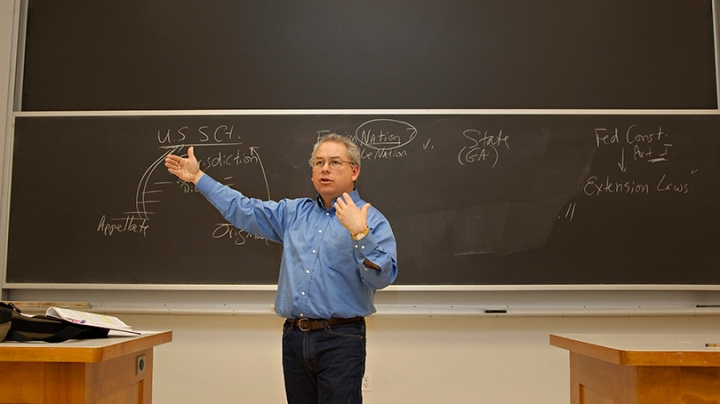 “I’m excited about the opportunity to work in intellectual fields that have been so enriching to me personally and professionally over the years," says N. Bruce Duthu. (Photo by Joseph Mehling ’69)
5/18/2016
Body

N. Bruce Duthu ’80, the Samson Occom Professor of Native American Studies, will be the next Frank. J. Guarini Associate Dean for International Studies and Interdisciplinary Programs. He succeeds Lynn Higgins, the Edward Tuck Professor of French and a professor of comparative literature, of women’s, gender, and sexuality studies, and of film and media studies. She has held the office since 2011.

Duthu, who will take on his new position July 1, first arrived at Dartmouth as a student in 1976. An enrolled member of the United Houma Nation of Louisiana, he came back to campus a decade later to direct the College’s Native American Program, and served as Associate Dean of Freshmen and director of the Intensive Academic Support Program. In 1991, after earning his JD, Duthu joined the faculty of Vermont Law School, but returned to Dartmouth in 2008 as a professor of Native American Studies. He chaired the department from 2009-2015.

At Dartmouth, Duthu, who serves on the Council of Interdisciplinary Programs, was instrumental in developing an off-campus program based in Santa Fe, N.M. The program gives students an immersive experience in interdisciplinary education, interacting with Native American tribal communities and their citizens.

“This program mirrors Bruce’s ongoing critical engagement with the academic study of his heritage. Bruce’s knowledge of interdisciplinary studies is equal to his international experience,” said Mastanduno.

Duthu said he is honored to accept his new responsibilities. “I think interdisciplinary programs are among the crown jewels of the institution in terms of the substantive knowledge provided to our students and the contribution they make in helping our students develop critical capacity to work across disciplines in imaginative and productive ways,” he said. “I’m excited about the opportunity to work in intellectual fields that have been so enriching to me personally and professionally over the years."

Mastanduno praised Higgins, Duthu’s predecessor, for being “a voice of composure and reason,” throughout her tenure in the dean of faculty office. “When debating options or facing challenges, Lynn’s openness and critical mind consistently provided creative solutions to knotty problems. Her deep knowledge of interdisciplinary studies, honed in her own scholarship and in her co-founding of Dartmouth’s Women’s Studies Program, gave her a clear perspective concerning that portion of her responsibilities,” Mastanduno said.