Provost Carolyn Dever traveled to Dar es Salaam, Tanzania, this spring to see firsthand the work of a global health project developed by Dartmouth and Muhimbili University of Health and Allied Sciences (MUHAS). 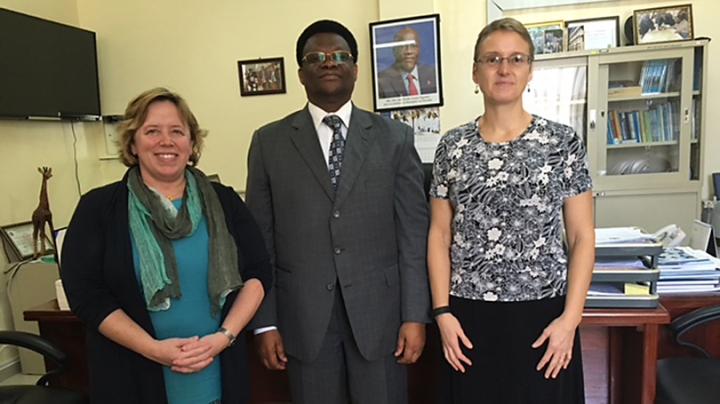 Provost Carolyn Dever; Ephata Kaaya, a clinical physician and vice chancellor of Muhimbili University; and Lisa Adams MED ’90, associate professor of medicine and of community and family medicine at the Geisel School of Medicine and associate dean for global health, meet in Dar es Saalam to talk about the DarDar global health collaboration. (Image courtesy of Carolyn Dever)
5/13/2016
Body

A 16-year collaboration, the project has seen a number of clinical successes, including the founding of the first pediatric HIV/AIDS clinic in the country.

In 2001, Geisel School of Medicine and Muhimbili University formed a partnership to address global health issues. Dartmouth’s Thayer School of Engineering, Tuck School of Business, and John Sloan Dickey Center for International Understanding are also partners in the work.

Since its founding, the partnership has expanded to include educational, research, and treatment programs involving students, medical residents, and faculty from the College as well as from Geisel and MUHAS. Dever says she was eager to see the how the global health collaboration has fostered reciprocity and mutual benefit.

“I am impressed and humbled by how Dartmouth and Muhimbili physicians and researchers are working together to implement thoughtful approaches to the health challenges they encounter every day,” she says.

Known as DarDar, from the contraction of Dartmouth and Dar es Salaam, the program has grown to fill two Dartmouth-constructed buildings at the Infectious Disease Centre in downtown Dar es Salaam, a one-story adult facility, and a two-story pediatric facility and research laboratory.

The name DarDar mimics the repeated syllables common in Kiswahili, one of the languages spoken in Tanzania, and is close to the word for “sister” (dada), says Lisa Adams, MED ’90, an associate professor of medicine and of community and family medicine at Geisel and an associate dean for global health. Adams accompanied Dever on the trip, along with Bruce Pacht ’67 from the Lebanon Rotary Club. The Hanover Rotary Club has provided financial support for Dartmouth student exchanges with the DarDar program.

Dartmouth undergraduates and medical students travel to Dar es Salaam to work in a pediatric HIV clinic, receive clinical training on the hospital wards, participate in research, and do supportive outreach work, Adams says. In addition, Geisel researchers partner with colleagues at Muhimbili, train Tanzanian physicians to become the leaders in their country, and provide clinical services.

Dever and Adams visited Ephata Kaaya, a clinical physician and the vice chancellor of Muhimbili University. The three discussed the longstanding effort by Dartmouth and MUHAS to attack infectious diseases in Tanzania—in particular, tuberculosis and HIV/AIDS.

Dever and Adams also met with Sylvia Kaaya, dean of MUHAS, who stressed that in the fight against infectious diseases, medical interventions are only as effective as the social and behavioral changes that support them, Dever says.

Kaaya told Dever about a proposed DarDar program to build a support network to help HIV-infected teenagers transition to managing the chronic, often stigmatized disease, as they grow into adults. She also described ongoing research into the timing of treatments during pregnancy that have the best chance of forestalling the transmission of HIV from mothers to infants.

“The DarDar program represents a commitment to compassionate change, to change in context, in support of health and human wellbeing,” Dever says.

Dever and Adams also visited the clinic co-led by Ndeserua Moshi, an ear, nose, and throat physician, and Geisel Professor of Medicine Jay Buckey, who are investigating the emergence of hearing loss among young Tanzanians affected by HIV/AIDS.

The research, started in 2010 with funding from the National Institutes of Health, suggests that central auditory testing may be a way to assess central nervous system damage in HIV-positive people, Buckey notes in a report about the project. In addition, the project has trained Tanzanian staff to perform comprehensive hearing evaluations, and both Dartmouth undergraduates and Geisel medical students have worked on the project over the years.

Dever hosted a dinner attended by DarDar colleagues from MUHAS, the Tanzanian non-governmental organization Management and Development for Health, and last year’s Young Africa Leaders Initiative (YALI) program representative from Tanzania, Hyasintha Ntuyeko, who spent last summer at the John Sloan Dickey Center for International Understanding. YALI is a State Department program that supports emerging entrepreneurs and leaders from Africa by sending them to intensive summer programs at U.S. universities.

Several Tanzanian medical and research professionals have earned master of public health and PhD degrees from Geisel, and are back in Tanzania to help build research, education, and clinical programs, Adams says. Dartmouth programs have trained a number of clinicians and public officials who have gone on to leadership roles in Tanzania. For example, an official with the Tanzanian Ministry of Health, physician Johnson Lyimo, is a graduate of The Dartmouth Institute for Health Policy & Clinical Practice.

“The changes they seek in Dar es Salaam are many and challenging,” Dever says. “But the DarDar program demonstrates the critical impact we at Dartmouth can have through interdisciplinary collaboration both at the College and globally.”