Dartmouth scientists at work in Greenland offer readers at home a chance to follow along—virtually. 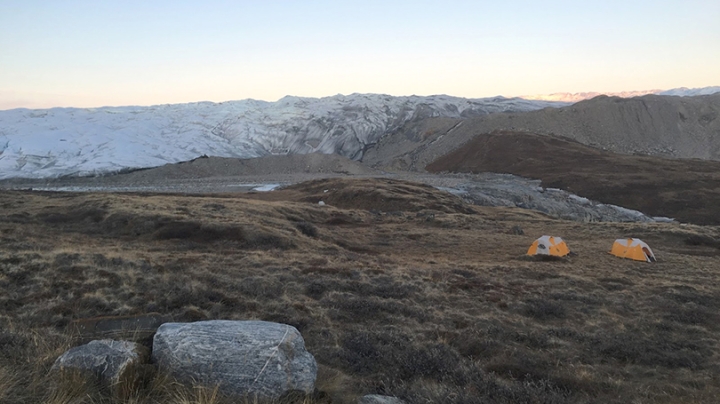 Camp is set up near the edge of the Greenland ice sheet. (Image courtesy of GreentrACTS blog)
5/06/2016
Body

From the April 24 post: A Dartmouth research team has begun an expedition in Greenland at the NSF deep field station Camp Raven in southwest Greenland and will travel 1,700 kilometers from Southwest Greenland to the summit of the ice cap. The team will use a variety of Boise State University radar systems to track the subsurface snow layers, and will continuously measure the journey to the summit. The age of the layers will then be determined by a geochemistry analysis of 60-foot core sample sections of ice and snow. The research data gathered from each sample site allows for estimating annual snowfall amounts dating back over 50 years.

During the seven-week expedition, the research team will travel by snowmobile and live in tents. In addition to mapping new areas for measurement, they will also revisit multiple Program for Artic Regional Climate Assessment (PARCA) sites. PARCA was launched by NASA in 1993 with the primary goal of measuring and understanding the mass balance of the Greenland ice sheet.

The Greenland field expedition is funded by a collaborative NSF Office of Polar Programs grant between Boise State and Dartmouth. The principal investigators from Boise State are geoscientists H.P. Marshall and John Bradford, and for Dartmouth, they are Assistant Professor of Earth Sciences Erich Osterberg and Associate Professor of Earth Sciences Robert Hawley. This trip to Greenland will include detailed core sample analysis and radar observations completing half the full traverse; a second trip will be completed next year.

The research continues previous work in Greenland conducted by Marshall and Bradford. Bradford’s radar inversion work completed with Boise State doctoral student Joel Brown and University of Montana glaciologist Joel Harper will be applied to the radar data collected during this research trip. Marshall conducted radar measurements in 2010 and built a radar system used for a traverse from the summit to Thule Air Base.

The research being conducted during this trip and the subsequent trip next year holds significant relevance for the future of the planet and research into climate change.

“This project is important, because we don’t know much about the snowfall amounts in this area,” Marshall explained. “The snowfall in this area is changing and controls the behavior of a large part of the ice sheet. The behavior of the ice sheet is important because it is the major contribution to global sea level rise, and affects global climate.”

From the May 2 post, second day on the ice:

Just off the satellite phone with Erich from Raven, where the team was inserted with a LC-130 Hercules Saturday.  After setting up a temporary camp, part of the team took a shakedown run up to the first core site yesterday, getting a feel for the conditions and how the sleds pulled.  They brought about 3/4 of the cargo to the first core site, and then returned to Raven.  All in all a good shakedown.

Still getting instruments up and running, but Erich reported the laser surface profiler and GPS units are working, and configuration of the radars are underway. All are in good spirits and ready to head to core site 1 tomorrow.