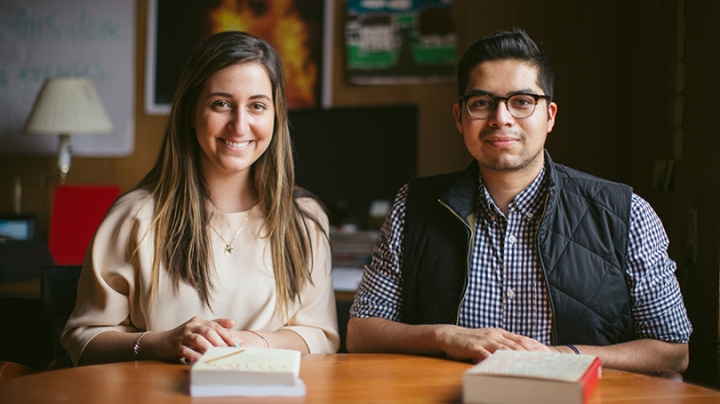 Senior fellowships, established in 1929 by President Ernest Hopkins and supported at Dartmouth by the Kaminsky Family Fund, offer extra time and reduced tuition to pursue projects beyond the scope of curricular courses. Fellows are not required to enroll in classes during their senior year, nor are they required to complete a major.

Cordero came to his topic, “The Gay Digital Diaspora: The Internet, Identity, and Gayness Online,” from personal experience. “As a gay millennial,” he says, “I grew up with Internet access and used it to explore my sexual identity in a conservative home.”

He began his year-long project with a sweeping question: Where do gay millennial youth in America go to learn about their sexual identity, especially if they feel the need to keep it hidden at home or in their communities? “It must be the Internet,” Cordero guessed. As his research evolved, he narrowed its scope, asking, “How do three Internet sites—Queerty, Out, and The Gayly Grind—represent and perpetuate a certain kind of gayness?”

Cordero says scholars have studied the way television and movies portray homosexuality, but the Internet has not received as much scrutiny. “On TV,” Cordero says, “gay men tend to be young—under 30—attractive, white, and physically fit.”

A similar stereotype dominates in visual content posted on the three Internet sites he analyzed. He finds that troubling because it means that young gay men of color like him do not see themselves represented on the most popular sites to which they turn for community with those who share their sexual preferences.

“I think this is important work,” Cordero says. “It’s not just about me trying to rehash my experience as an 11-year-old taking to the Internet to understand my sexuality. It’s about questioning openly things we take for granted. That’s why I study the intersection between technology and humanity, because far too often we consume technology without pausing and saying, wait, what is this doing to me?” Cordero grew up in Silicon Valley. “So I love technology,” he says. “But I never thought about it critically until I came to Dartmouth.”

Yona has also been thinking critically—about how to combat climate change. Having grown  up in Montreal, she traces her environmentalism to a high school biology course that involved wearing waders. “We caught fish with biological anomalies related to water pollution,” she remembers. “It was at that moment that I realized that there was this huge problem and it was so urgent, and I felt that the adults in the world were not doing what they needed to help young people—like 16-year-old me—have a future where we could thrive.”

Guided by, among other faculty, Ross Virginia, the Myers Family Professor of Environmental Science and the director of Dartmouth’s Institute of Arctic Studies, Yona has done scientific fieldwork in Arctic regions. She is also inspired by the theories of the late Donella Meadows, a scientist and systems analyst who taught at Dartmouth for nearly 30 years. Meadows proposed that solving large global problems relies on a clear understanding of leverage points, when intervention is most likely to bring about change.

For her fellowship project, “The Year of the Elephant: Leverage Points for Climate Change Action,” Yona researched not only the science of climate change, but also the political strategies needed to reverse it on a global scale. One of her key findings is that young activists need to take time out of marathon summits and protests to meet on a personal level—to take care of themselves and each other as they try to save the planet from what they see as imminent, humanly caused catastrophe.

Yona and Cordero presented their interdisciplinary fellowship work at a May 17 symposium. Afterwards, they talked about what they have learned, not only about their topics, but about themselves.

“There was this moment at four or five in the morning when I put together all the chapters of my book into one Word document, and it was too long even to email to myself, and I realized what I had been able to accomplish,” Yona said about her project. Her interviews with climate change activists involved extensive international travel, sometimes at tense moments, such as after the terrorist attacks in Paris last November.

Doing what few other researchers have done—analyzing visual representations of gayness on the Internet—was daunting at times, but also enlightening, Cordero says. “There is more work to be done around how language, not just imagery, represents gayness, and not just on gay-oriented sites,” he says.