Seven Scholars Named to the Society of Fellows

The postdoctoral students will be participating in the second year of President Hanlon’s initiative. 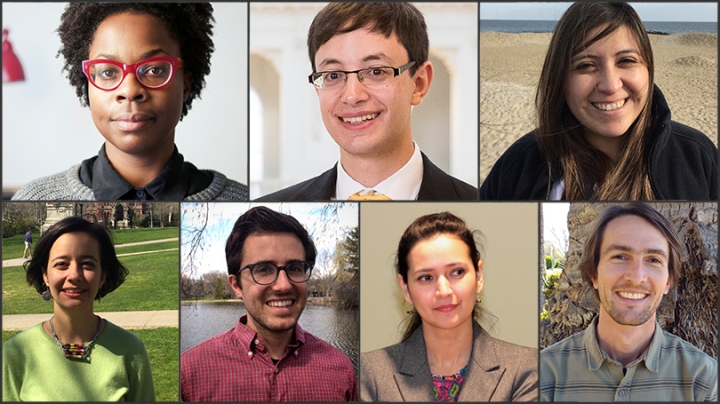 Dartmouth has named seven postdoctoral students from across the country to the Society of Fellows, the second cohort of rising scholars to be selected since President Phil Hanlon ’77 laid out his vision for the society three years ago.

In his 2013 inaugural address, President Hanlon said the Society of Fellows would give emerging postdoctoral scholars the opportunity to “learn the art of teaching from the true masters on our campus, while bringing to Dartmouth their own unique passions and innovation.”

Many of the teachers and scholars who come here through the society will go on to have distinguished careers, taking with them the foundational imprint of Dartmouth, Hanlon said.

In the fall, the new class will work as junior fellows paired with seven Dartmouth faculty senior fellows, who were named Society of Fellows mentors in 2014 at the inception of the program. Chair of the faculty mentors, Randall Balmer, the John Phillips Professor in Religion, hailed the talent of the new class.

“The extraordinary quality of our applicant pool again this year made the selection process very difficult,” Balmer says. The program is very fortunate to welcome the seven new fellows he added. “We’re confident that this next cohort of junior fellows will be a superb addition to the intellectual life at Dartmouth.”

This year’s fellows, selected from a pool of 736 applicants, begin three-year fellowships on Sept. 1. This year, applicants to the postdoctoral programs were expected to consult with a Dartmouth faculty member in their field, not for a recommendation but to gain a better picture of how their scholarship would fit in and complement Dartmouth’s strengths, according to the application guidelines.

In addition to Balmer, the faculty fellows are Pamela Kyle Crossley, the Charles and Elfriede Collis Professor of History; Peter Golder, a professor of marketing at the Tuck School of Business; William Lotko, the Sue and John Ballard ’55, TT ’56 professor of engineering at Thayer School of Engineering; George O’Toole, a professor of microbiology and immunology at the Geisel School of Medicine; Donald Pease, the Ted and Helen Geisel Third Century Professor in the Humanities, and a professor of English; and Michelle Warren, a professor of comparative literature and faculty coordinator of the Mellon Mays Undergraduate Fellowship program.

The fellows will participate in the activities of the society, including presenting their own work through society-sponsored symposiums and events. They will hold appointments as non-tenure-track lecturers in a department. They will teach one course during two academic years, and will be in residence for the fall, winter, and spring terms, and during one of two summer terms. Fellows will receive a stipend and will participate in pedagogical training through the Dartmouth Center for the Advancement of Learning (DCAL).

More about the new fellows, condensed from their personal statements:

Michael Barany's dissertation, “Distributions in Postwar Mathematics,” examines how modern societies produce abstract, systematic, and theoretical knowledge, and how that kind of knowledge affects modern societies. His dissertation identified a sudden shift in the scale of professional mathematics immediately following the Second World War, when it became common for leading mathematicians to traverse multiple continents to pursue their research. He argues that this meant that for the first time institutions in Latin America, South Asia, and other regions beyond Europe and the United States were integral parts of a global mathematical community, rather than mere outposts or exceptions. His primary research focus at Dartmouth will be to consolidate and elaborate this research, and organize an international symposium on the emergence of "global mathematics." He is also pursuing a secondary track of research on the global history of the blackboard.

Yesenia Barragan’s work examines the history of race, slavery, and emancipation in Colombia, Afro-Latin America, and the Pacific. Her dissertation, “To the Mine I Will Not Go: Freedom and Emancipation on the Colombian Pacific, 1821‐1852,” tells the story of the abolition of chattel slavery in Colombia, currently the country with the third-largest population of people of African descent in the Western Hemisphere after the United States and Brazil. Her work seeks to unravel the struggles over freedom and bondage during this protracted process of gradual emancipation in the households, courtrooms, streets, and gold mines of the Pacific Coast of Colombia. Her work examines the history of 19th-century abolition and emancipation, arguing that the freedom generated through the gradual abolition of slavery constituted a modern form of racial governance. Colombia, she says, represented a groundbreaking early model of emancipation in the Atlantic world whose importance has been largely overlooked.

Nathalie Batraville’s work focuses her studies on gender, class, and racialization in the Black Atlantic. In her dissertation, “Poetic Revolution and Political Isolation: Haiti’s Literary Avant-Garde, 1957-1971,” she explores how poets and novelists, especially those who came of age during François Duvalier’s dictatorship, developed innovative forms that grew out of an increasing awareness and anxiety regarding the isolation of Haiti’s working poor within global capitalism, focusing on writers Marie Vieux, Frankétienne, Davertige, and Jacqueline Beaugé.  Her next research project examines how “blackness” functions within existentialist philosophy. Using the writings of Sartre, Camus, de Beauvoir, Fanon, Marie Vieux, Senghor, and de Vastey, she interrogates the ways in which blackness and black womanhood come to signify abjection and become the non-being against which being is constructed and represented. She is also working to complete a project that delves into France’s defense of slavery between 1788 and 1794.

Alexander Sotelo Eastman’s dissertation, “Binding Freedom: Cuba’s Black Public Sphere, 1868-1912,” studies the cultural, social, and political associations linked to the civil rights movement in Cuba at the turn of the century, which witnessed the abolition of slavery, the crumbling of colonialism and the entrance of black intellectuals into formal politics. His research explores how collective consciousness is articulated through print culture and converted into social movements, in particular among marginalized communities that have not historically had full access to citizenship and literacy. A major thrust of the study centers on the limitations of antislavery narratives as well as the social and economic hurdles the black press encountered. The second half of the project focuses on the transition from colonialism to “colorblind republicanism” to map how the black press and organizations—from mutual aid societies and baseball clubs to veterans’ associations—adapted their discourse and tactics to confront new forms of social and political oppression.

Garrett Nelson is a geographer whose work focuses on the history of landscape planning in the United States. His dissertation, “A Place Altogether: Planning and the Search for Unit Landscapes, 1816–1956,” takes a historical approach to the question of what size areas are appropriate to plan as a whole. By following debates among planners, scientists, social reformers, and politicians about how to evaluate unity and diversity in spatial terms, Nelson examines both the institutional and the moral consequences of calling some part of the Earth’s surface a “single” place. His work explores how the different kinds of “unit” geographies in which planners operate—from neighborhoods and towns to metropolises and eco-regions—bear the traces of socially-contested processes of inclusion and exclusion. More broadly, Nelson is interested the ways that groups come to organize themselves geographically, and how these patterns trace onto ideological arguments about justice, community, state power, and environmental regulation.

Tatiana Reinoza’s dissertation, “Latino Print Cultures in the U.S., 1970-2008,” analyzes U.S. Latino graphic art and its relationship to collective identity formation. Using archival research, oral history, and visual analysis, she charts the development of collaborative printmaking and its contribution to the formation of “latinidad” over a forty-year period. She is interested in understanding how artists articulate this identity through tropes of exclusion: the political prisoner, the colonial subject, and the undocumented, as well as how workshops function as engines of identity formation. Of the more than 300 workshops founded during the golden age of the collaborative press movement in the United States, the contributions of Latino graphic workshops remain largely unexamined and her study shows some of their socio-political functions. At Dartmouth, she will continue investigating visual print cultures and audience development.

Yana Stainova’s dissertation “Violence and Violins: the Social Resonance of Classical Music in Venezuela,” explores the transformative power of music practice for youth as they aspire to craft their lives amid violence and state repression. At Dartmouth, Stainova plans to prepare her dissertation for publication as a book and to embark on a new ethnographic project,  “Migrating Music,” which focuses on how Latino youth at Youth Orchestra Los Angeles reach out to music and other art forms to navigate the challenges of immigration—especially to build identities straddling cultures, languages, and generations.

Vanessa Freije, a PhD in history from Duke University, is leaving her Dartmouth fellowship after one year to take a tenure-track faculty position at the University of Washington.