The students stepped off the bus and gasped. It had been cold when they left Hanover two days earlier, but here, at the base of the Groulx Mountains in far northern Quebec, it was really cold. And for the next week, it was not going to get much warmer, as temperatures would rarely reach double digits and occasionally drop to 20 or 30 below zero. But that, after all, was why they were here—to test themselves in extreme conditions. 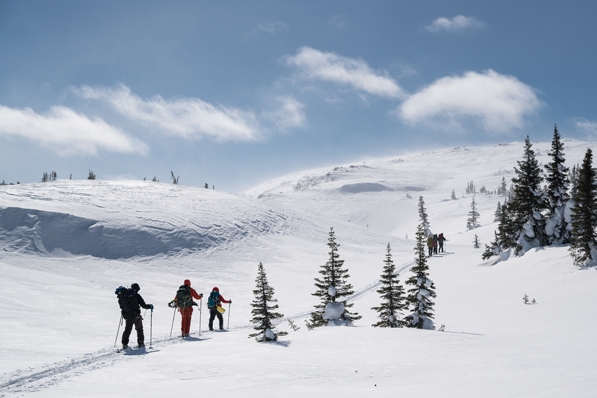 During the day, students explored the Groulx region on backcountry skis. (Photo by Eli Burakian ’00)

During this spring break trip to Quebec, the students would learn how to use snowshoes and skis to travel through the backcountry, how to cut and chop wood, how to set up a tent, and how to do all this in bitterly cold conditions. They were taking part in the 25th annual trip to the Groulx Mountains organized by Dartmouth’s Outdoor Programs Office (OPO). Almost every one of those years, the trip has been led by Brian Kunz, deputy director of the OPO.

“I do this every year because it is such a profound experience for students,” Kunz says. “Students learn how to work together so they can be comfortable in this demanding environment.” 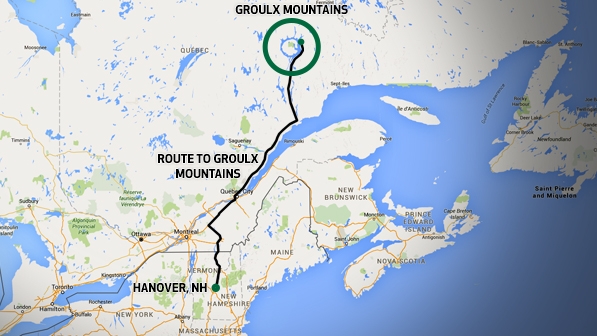 The group that traveled north this year was a cosmopolitan bunch, but for the most part, not one experienced in cold-weather camping. The students included a first-year from China, a fourth-year from Sweden, two second-years from Maryland, two undergraduates from South Korea at Dartmouth on an exchange program, and two Tuck students from the United Kingdom.

It took two full days of driving to reach their first destination—a cabin built and owned by Michel Denis, a longtime guide in the Groulx region. Then, for a couple of days, the students stayed at the cabin and learned how to get water from a frozen stream, how to chop trees for firewood, and how to travel safely on skis. Most importantly, the time at the cabin was a sort of test, allowing the students to get to know each other and learn the basic skills they would need when they left the cabin for the backcountry. 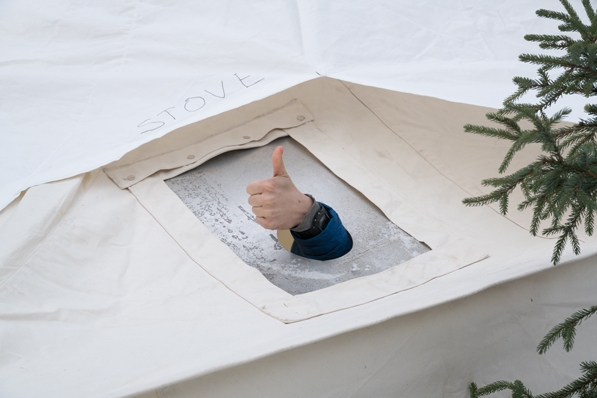 Fredrick Eriksson ’16 signals that the stove pipe is ready to put through the hole in the tent.” (Photo by Eli Burakian ’00)

Given how mild this past winter was in New England, the students might have expected to find warmer than usual conditions in Quebec as well. They didn’t. At 52 degrees north latitude, the Groulx has much harsher winter conditions than New England, and this year the snowpack was up to 10 feet deep by mid-March.

Shuoqi Chen ’18, who came to Dartmouth from China, was amazed by the amount of snow. “I’m pretty sure it’s more than all the snow my mom, my dad, my grandfather, and I have ever seen our entire lives,” he said.

After three days at the cabin, the students loaded up sleds and backpacks and headed for the backcountry, where they erected a large tent—their home for the next few nights.

During the days, the group explored the area by skis. A nearby plateau provided an otherworldly experience. The rolling terrain was punctuated by steep cliffs and trees poking out of expanses of snow. A fierce wind took bites out of even the smallest bit of exposed skin, underlining the importance of appropriate clothing and gear.

For Lily Xu ’18, who had little experience exploring the outdoors before coming to Dartmouth, the trip offered more than a chance to learn the skills of skiing and living in extremely cold conditions. “I have learned how to best work with group dynamics,” she says. “Being on a trip like this has really made me a lot more comfortable being able to adapt to different environments.”

Fredrik Eriksson ’16, who served as the assistant leader of the trip, echoes Xu’s sentiments. “What I’m taking away from this trip, and what I appreciate the most about these kinds of outdoor activities, is building community.”

See more photos from the trip on Dartmouth’s flickr site.