Forum to focus on reports from the Community Study and inclusivity working groups. 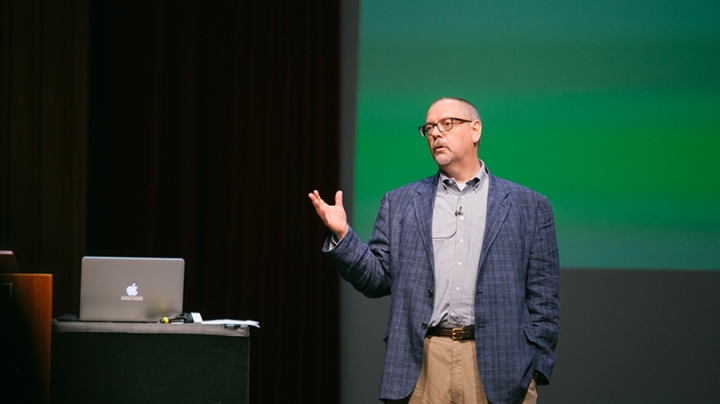 The Dartmouth Community Study survey, administered in October, and recommendations from the three working groups in the Inclusive Excellence initiative top the agenda for next week’s town hall meeting, which will be hosted by Executive Vice President Rick Mills.

Mills invited Provost Carolyn Dever, Vice Provost for Academic Initiatives Denise Anthony, and Chief Financial Officer Michael Wagner to the meeting, to be held at noon on Wednesday, May 11, in Spaulding Auditorium at the Hopkins Center for the Arts.

Anthony will talk about the Community Study survey, released by the College this week, and then Mills, Dever, and Anthony are scheduled to talk about the inclusive excellence efforts and answer questions. Following that discussion, Wagner will give a 10-minute financial update for the College.

Results from the study's survey, designed to give College officials a better understanding of the living, learning, and working environment at Dartmouth, were received by College officials this week. The three working groups—which have been looking at issues of faculty, staff, and student diversity and inclusion—this week gave recommendations to an executive committee made up of President Phil Hanlon ’77, Dever, Mills, and Vice President for Institutional Diversity & Equity Evelynn Ellis.

In an email sent Tuesday to students, faculty, staff, and alumni, President Hanlon and Dever asked community members to participate in a series of forums to discuss the survey and recommendations. After hearing from community members, the executive committee will present a plan of action by the end of spring term.

Mills says the next meeting in his town hall series will provide an opportunity to continue the discussion on these issues. Mills initiated the series in October 2014 with the goal of fostering a regular, open exchange with members of the Dartmouth community about the future of the College.