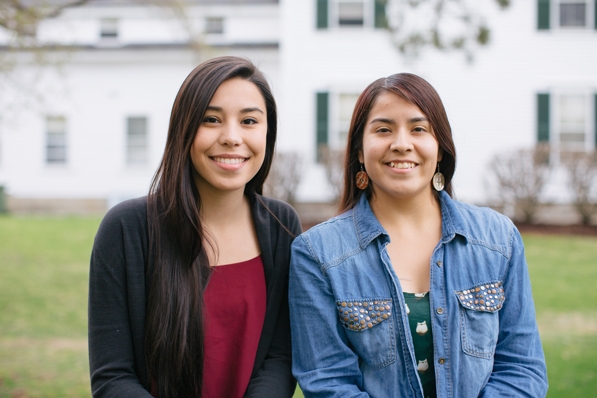 They join 58 other Udall Scholars—exceptional student leaders from 49 colleges and universities around the country who are committed to careers in the environment, American Indian health care, or tribal public policy. The scholarship provides up to $7,000 for the scholar’s junior or senior year.

A double major in earth science and Native American studies with a minor in anthropology, LaFrance, a member of the Crow tribe, wants to learn more about tribal energy and economic policy.

“Coming from a community that heavily relies on coal, and looking at the current issues with coal and tribal sovereignty, I thought it was interesting to look at different paths different tribes are taking,” she says. “I started to develop that interest in more renewable energy, because eventually I think that coal is going to run out, and our tribe needs to start looking at alternatives.”

One of these is hydroelectric power, she says. “I like hydrology; I like rivers. We do have a dam on our reservation, but it’s not running right now. Often tribes have to hire non-Native people to run these kinds of operations. I really want to be that person.”

This summer, LaFrance will be in Washington, D.C., as Mickey Leland Energy Fellow, serving as an intern at the Department of Energy, where she will be researching tribal energy policies around coal.

She has also received Stamps Leadership Scholar Award and a Dreamstarter grant from Running Strong for American Indian Youth, both of which she is using for a project to preserve her people’s oral traditions by connecting elders with students in schools on her reservation.

“I want to give back to my family, my community, in any way that I can,” she says. “They’ve been there for me, so I want to be there for them.”

Thomas, a Hunkpapa Lakota, plans to major in economics modified with education and minor in Native American studies.

“The Udall is a good fit because I really want to work with education policy to help tribes,” she says. “I’ve always been passionate about helping people.”

She wasn’t sure how she wanted to direct that passion until this winter, when she took a class called “Issues in Contemporary Education in America,” with Charles Wheelan ’88, a senior lecturer and policy fellow at the Nelson A. Rockefeller Center for Public Policy.

“I realized how many issues there are in our public education system, and then how much worse those are on reservations,” Thomas says.

Though she did not grow up on a reservation herself, much of her family lives on the Standing Rock Reservation. “I saw them struggle through their education systems and how that really disadvantaged them,” she says. “I know if I had gone to a school on the reservation I wouldn’t be as prepared as I was for Dartmouth, and I probably wouldn’t be able to stay here.”

Thomas plans to use the Udall Scholarship to study in Denmark next year through a Dartmouth exchange program with the University of Copenhagen.

“They offer an economics of education course, which is right up my alley,” she says. “Udall will help me be able to do that without having to take out more loans.”

Thomas is active in Native Americans at Dartmouth (NAD). She served on the committee for last year’s Powwow and as NAD social chair, and this summer will serve on the group’s executive committee. In addition, she works for GreensCorps and the Upper Valley Business and Education Program, a local nonprofit organization. She has participated in the Management and Leadership Development Program through the Rockefeller Center.

Last fall, Thomas participated in the Native American Studies Program’s off-campus program in Santa Fe, N.M., an experience, she says, that “reaffirmed and reminded me how different all the tribes are in the country. It reminded me that there’s not going to be one solution for every tribe.”

About the Udall Foundation

In August, the 2016 Udall Scholars will gather in Tucson, Ariz., to meet each other and program alumni as well as other leaders in public service. Both LaFrance and Thomas are excited about meeting their fellow scholars.

“I was looking at the list of other Udall Scholars and I was like, these people seem so cool—look at all the stuff they’re doing!” says Thomas. “It’s always interesting to connect with other young people who are passionate about going back to their communities or working on a national level with tribes after they graduate.”

LaFrance agrees. “Really getting to know people who can help me achieve what I want to do and building that network is an awesome opportunity,” she says.

Established by Congress in 1992, the Udall Foundation awards scholarships, fellowships and internships for study in fields related to the environment and to American Indians and Alaska Natives in fields related to health care and tribal public policy; provides funding to the Udall Center for Studies in Public Policy and to the Native Nations Institute to conduct environmental policy research, research on American Indian and Alaska Native health care issues and tribal public policy issues, and training; and provides assessment, mediation, training and other related services through the U.S. Institute for Environmental Conflict Resolution.

For information about applying for Udall Scholarships and other opportunities, visit Dartmouth’s National Scholarships/Fellowships website.