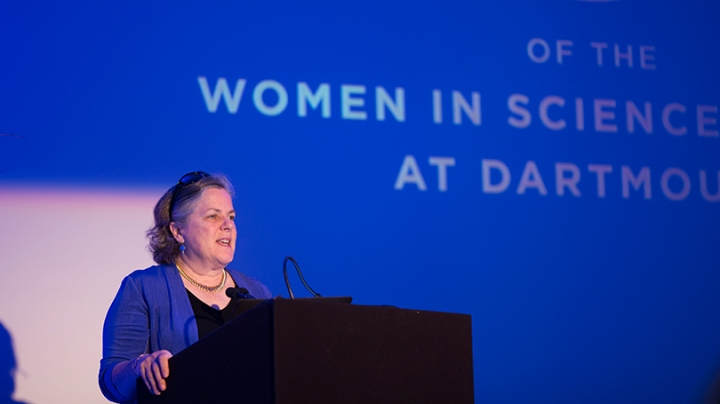 In 1990, the Hubble Space Telescope was launched, the first web page was created, and the Women in Science Project was founded at Dartmouth. Science and engineering have come a long way since then.

In April, WISP alumnae celebrated the 25th anniversary of the program, which seeks to reach women in their first year at Dartmouth and give them the support and resources they need to succeed in science, engineering, and mathematics. Participants are placed in internships with faculty and given access to peer mentors and unique research opportunities.

Carol Muller ’77, former associate dean for administration at Thayer School of Engineering and co-founder of WISP, realized something needed to change to increase the ranks of women in science.
A member of Dartmouth’s second coeducational class, Muller was surprised to find that the engineering school “had scarcely been impacted by the great social changes of the 1960s and ’70s. All the faculty were men, the secretaries were women and called themselves ‘girls,’ and just a few of the students were women.”

When chemistry professor Karen Wetterhahn stepped into the role of associate dean of the arts and sciences, she named the inclusion of women in the sciences as a key goal. In Wetterhahn, Muller found a collaborator with “a common passion, not only for [their] goal but for results-oriented action.” Together, Muller and Wetterhahn, who died in 1997, outlined a program designed to address student needs, the structure of which remains essentially unchanged today.

“While my understanding of what we need to do to effect change has grown considerably more nuanced, I think we still pretty much got it right all those years ago,” Muller says.

In its quarter century, WISP has placed 1,707 student research interns with 331 faculty research mentors, and 4,400 students have participated in the peer mentor programs.

The program’s benefits are clear. While in 1990, only 45 women majored in the sciences, by 2015 that number had increased to 114. Nearly half of Dartmouth engineering majors are now female, compared to an average of 19 percent nationally. Today more women than men major in biology at Dartmouth.