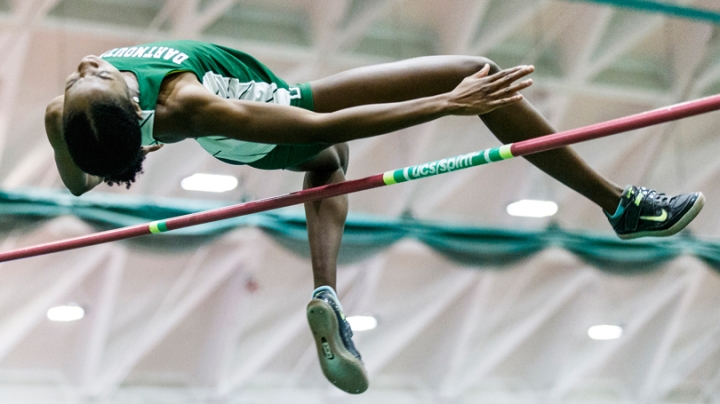 Many Dartmouth College athletes and alumni achieved top status over the spring, including First Team All American honors in track and field, draft offers from Major League Baseball and the National Football League, and a Stanley Cup championship in the National Hockey League.

Some of the highlights include:

For the second time in 2016, Dartmouth’s Kaitlin Whitehorn ’16 is a First-Team All-American in the high jump and her Women’s Track & Field teammate Dana Giordano ’16, in her final time running for the College, earned All-American First-Team honors in the 1,500-meter race.

The two were competing in the 2016 NCAA Track & Field Outdoor National Championship at the University of Oregon’s Hayward Field in Eugene, Ore., on June 11. Both returned to Hanover to attend graduation on June 12.

After finishing seventh during the indoor season, Whitehorn claimed third in the NCAA final, clearing 5 ft. 11.5 in./1.82 meters on her first attempt and tying for third place. She leaves Hanover as the most decorated high jumper in program history, with three All-America honors and six Ivy League titles between indoor and outdoor seasons.

One day after Dartmouth right-hander Duncan Robinson ’16 was selected in the ninth round of the Major League Baseball draft by the Chicago Cubs, another Big Green righty, Michael Danielak ’16, had his name called in the 28th round by the Pittsburgh Pirates on June 11, giving Dartmouth multiple selections in one draft for the first time since 2013.

Danielak split his time on the mound this past season as a starter and reliever, posting a 2-3 record with a 2.95 ERA while leading the team with a strikeout rate of 9.76 per nine innings (43 in 39.2 innings). Opponents hit just .263 against him, and he walked just nine batters (2.04 per nine innings) to help Dartmouth rank 11th in the country in fewest walks issued per nine innings.

Robinson was named to the All-Ivy League First Team for the third straight year this spring after posting a 3.28 ERA and 4-6 record while leading the conference with 73 strikeouts. The 2015 Ivy League Pitcher of the Year, Robinson finished his career with a 17-11 record and the second-lowest ERA for the Big Green in the past 40 years at 3.07. His 174 strikeouts tie him for the ninth-most at Dartmouth with fellow Big Green Baseball alumnus and Cubs starting pitcher Kyle Hendricks ’16.

The eighth former Ivy Leaguer and just the second former Dartmouth player ever to have his name etched on Lord Stanley’s Cup, Pittsburgh Penguins’ defenseman Ben Lovejoy ’06 capped an incredible year on June 12 by achieving his childhood dream of winning the National Hockey League championship.

A member of the previously unheralded and now celebrated Penguins’ defensive core, Lovejoy and his Pittsburgh teammates claimed the cup Sunday night in San Jose, Calif., defeating the Sharks, 3-1, in Game 6 of the Stanley Cup final.

Lovejoy ranked 17th among NHL defensemen in scoring during the postseason with six points, but his goal in game three of the Sharks series made him the first Dartmouth alumnus ever to score in the Stanley Cup Final. He went on to add a second-period assist for the first multi-point postseason game of his career. The Concord, N.H., native also earned a place in the record book as the first-ever New Hampshire born player to win the Stanley Cup final.

The Chicago Bears announced the free-agent signing of former Dartmouth quarterback Dalyn Williams ’16 on June 9, joining signings earlier this spring by Jacob Flores ’16 to the Green Bay Packers, and Vernon Harris ’16 to the Kansas City Chiefs.

A religion major with a 3.39 GPA, Flores started in every game in the past three years, serving as the team’s center in his senior year. Named to the All-Ivy League First Team as well as the All-New England Team, Flores was a big part of the line that helped this year’s squad score nearly 29 points and gain 410 yards per game.

Harris, a 6-2, 195-pound cornerback, was also named to the All-New England Team. The first Big Green player ever to start 40 games in a career, Harris tied for fifth in the conference with three interceptions — two in a 34-18 victory at Brown — while recording 50 tackles, the third-most on the Dartmouth defense.

The Intercollegiate Women’s Lacrosse Coaches Association (IWLCA) named Jaclyn Leto ’16 to the 2016 All-American Third Team in May, after the close of a Dartmouth Women’s Lacrosse season that came within one game of a berth in the Ivy League Tournament.

The honors presented to Leto in 2016 now read like a laundry list of successes bestowed on one of the nation’s top players. She has been a member of the IWLCA All-Northeast Region First Team, the unanimous Ivy League Midfielder of the Year, and a unanimous All-Ivy League First Team selection.

The Dartmouth team captain becomes the 47th All-American under head coach Amy Patton’s tutelage since Patton took over the coaching reins in 1993.

After finishing sixth in day one of the National Championship, the Big Green tallied 306 points on the final day of the tournament. The Coast Guard took home the Gerald C. Miller Trophy with 204 points and Ivy League foe Brown finished second with 244.

In addition, the Dartmouth coed sailing team’s season concluded with a 10th-place finish in the western semifinal round of the Inter Collegiate Sailing Association Gill Coed National Championship in San Diego, and the Dartmouth heavyweight rowing team wrapped up the 2015-16 season with a 14th-place finish at the Intercollegiate Rowing Association (IRA) National Regatta on Mercer Lake in West Windsor, N.J., earlier this month.