“They almost all talk about the importance of community,” says Tailour Garbutt ’16. 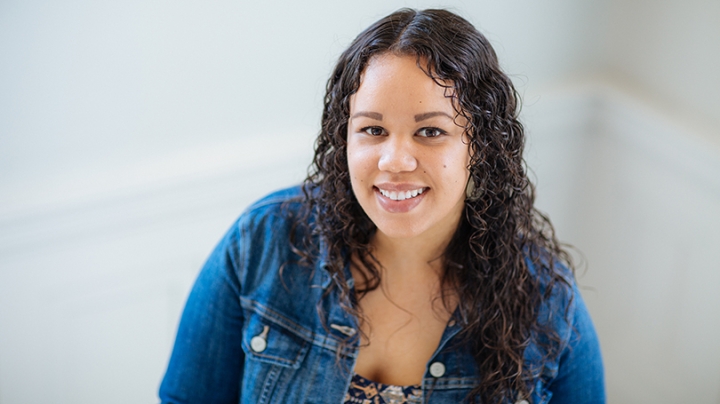 In 1824, Dartmouth admitted its first African American student, Edward Mitchell, who had worked in the household of then-president Francis Brown. Rauner Special Collections Library holds a petition students wrote, asking the college to admit Mitchell, despite trustees’ fears that he would be “unacceptable.” The students prevailed, and Mitchell was enrolled in the Class of 1828, making Dartmouth an Ivy League forerunner in admitting African Americans.

When Tailour Garbutt ’16 first read that document as part of an English class assignment, she wrote a story about Mitchell that won the Lockwood Prize for creative writing. But she didn’t stop there. Realizing that others, including Forrester “Woody” Lee ’68, were researching the experience of African American men at Dartmouth, Garbutt turned her attention to women of color who entered the College after it began enrolling female students in 1972.

Fourteen of their stories form the backbone of her online senior project, “Speaking Our Truths.”

“Even from the 1970s, there are experiences I can relate to,” says Garbutt. “There are differences, but a lot of continuity, and the stories these women tell are very powerful.”

Garbutt found many of her interviewees through the Black Alumni of Dartmouth Association (BADA) and by posting queries for her project on social media.

Ricki Fairley ’78 tells her story on Garbutt’s Speaking Our Truths site. It is about the day she met a fellow student who would become her best friend at Dartmouth. Fairley’s father was driving her, her mother, and her sister through campus when they spotted another young black woman, whom they did not know, walking down the street. “Get in the car,” Fairley’s father told the pedestrian. The young woman, Fairley later learned, was scared, having been told never to get into a stranger’s car, but she obeyed.

Fairley remembers it this way:

“My father asked, ‘What’s your name?’

He said, ‘Okay, this is my daughter Ricki. Now go be friends.’

He put us out of the car.

She ran away from me. She was scared to death.”

But eventually the two women met again, at tryouts for the predominantly black cheerleading squad. Vicki Stewart, from Tennessee, was cold. Fairley, from Silver Spring, Md., had warm clothes—plenty to share with her new friend.

When Ricki graduated in 1978, her father bought a Dartmouth sweatshirt at the Coop that he kept with the hope that one of his grandchildren would attend the College. When Amanda was accepted to the Class of 2007, her grandfather presented her with the sweatshirt; a gift Ricki never knew existed. Hayley continued the legacy when she joined the Class of 2014. Ricki hopes that a fourth generation of her family will attend the College on the hill.

Garbutt also interviewed current students of color. One, a friend of hers, is a senior from Tanzania. “She talks about how different racial politics are in the United States, and she’s actually looking forward to going back home to Tanzania so she doesn’t have to deal with that,” Garbutt says.

Each woman shares a distinctive set of experiences, but common threads run through the narratives. “They almost all talk about the importance of community,” Garbutt says, “about other black women who have been pillars of support for them.” Garbutt heard from some interviewees about the challenge of attending a small rural college with wealthier peers. “When you finish Dartmouth as a black student, you can take on just about everything,” she says.

Garbutt hopes to continue to collect memories from other female black Dartmouth students after she graduates. “I love creative fiction,” she says, “because I want to write something people will really want to read, and I also want it to be factual.”

Her goal is to create a forum where other women of color can speak for themselves about their college experiences.

“In 1973, there were seven black women attending Dartmouth,” Garbutt says. “Our numbers have grown, but we have a way to go. There is still work to do, but we are making progress.”