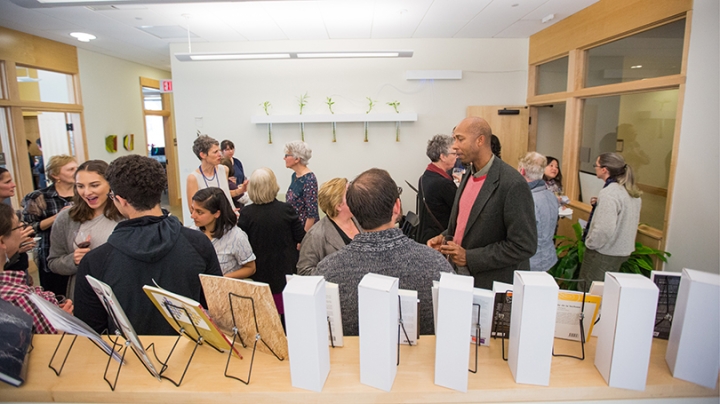 The Leslie Center for the Humanities hosted a celebration of arts and humanities faculty who published books in the past year. (Photo by Robert Gill)
6/01/2016
Body

On a recent afternoon, the Leslie Center for the Humanities hosted a reception for arts and humanities faculty who published books in 2015—works that included explorations of colonial West Africa and Mormon America, translations of 1,000-year-old novels and 2,000-year-old Stoics, musical compositions, and photographs of human-made light, bilingual children’s books, poetry and fiction, and much more, showcasing the breadth and depth of scholarly endeavor in the humanities at Dartmouth.

The event was also an opening for studio arts faculty whose work is now on display on the walls of the Leslie Center.

“I am very happy that we turned this space into a gallery so that we can always come here to get inspired,” said Graziella Parati, director of the Leslie Center. “This is a moment to recognize the enormous talent and dedicated work of our colleagues throughout the humanities, artists and scholars alike.”

“This is a fantastic celebration of accomplishments by professors in our division,” said Barbara Will, associate dean of arts and humanities and the A. and R. Newbury Professor of English. “There’s so much to celebrate—so many amazing works of scholarship and art that our faculty are producing, and we need to celebrate that more.”

Among the books: Professor Sarah Allan’s Buried Ideas: Legends of Abdication and Ideal Government in Early Chinese Bamboo-Slip Manuscripts. For the volume, Allan, the Burlington Northern Foundation Professor of Asian Studies in honor of Richard M. Bressler, analyzed and translated four ancient texts, part of a group of 5th-century BCE documents discovered in the past 15 years.

“They’re in the same period as the most important texts of classical Chinese philosophy, and they have an intertextual relationship with them—so they’re showing us a background to Confucius, Mencius, the other ancient Chinese philosophers that nobody knew about until very recently,” she said.

Dennis Washburn, the Jane and Raphael Bernstein Professor in Asian Studies, joked that his 1,360-page translation of Murasaki Shikibu’s 11th-century novel, The Tale of Genji, was the heaviest volume in the room.

“It is without question the most important work in Japanese literary culture—it’s their Shakespeare, their Dante, their Homer, if you want to put it that way,” Washburn says. “It affects almost every aspect of Japanese art, and has for the last millennium: visual arts, other literature, drama, film, whatever.”

Washburn said he welcomed the opportunity to celebrate the work of colleagues in the arts and humanities. “A lot of the work humanities professors do—and our students as well—is not immediately sexy. Some of it takes time. This book took me the better part of 15 years. The Leslie Center is bringing attention to that with events like this, and that’s really wonderful.”

Robert Baum, an associate professor of religion and of African and African American studies, agreed. “It’s nice to be recognized by one’s peers in the humanities and the arts—and also just to meet some new people,” he said. Baum’s book, West Africa's Women of God: Alinesitoué and the Diola Prophetic Tradition, describes how women prophets from what are now Senegal, Guinea Bissau, and Gambia resisted the colonial presence of the French and the Portuguese.

For Petra McGillen, an assistant professor in German studies who is currently working on her first book, the event was “extremely motivating. Writing a book is a long process, with many hoops to jump through, so I love seeing this celebration of what my colleagues have done.”

Books published by arts and humanities faculty last year, displayed at the reception honoring the authors, include explorations of colonial West Africa and Mormon America, translations of 1,000-year-old novels and 2,000-year-old Stoics, musical compositions and photographs of human-made light, bilingual children’s books, poetry and fiction, and much more. (Photo by Robert Gill)

Irene Kacandes, the Dartmouth Professor of German Studies and Comparative Literature
Let's Talk About Death: Asking the Questions that Profoundly Change the Way We Live and Die (coauthor)
Prometheus Books

Courtney Quaintance, associate professor of Italian
Textual Masculinity and the Exchange of Women in Renaissance Venice
University of Toronto Press 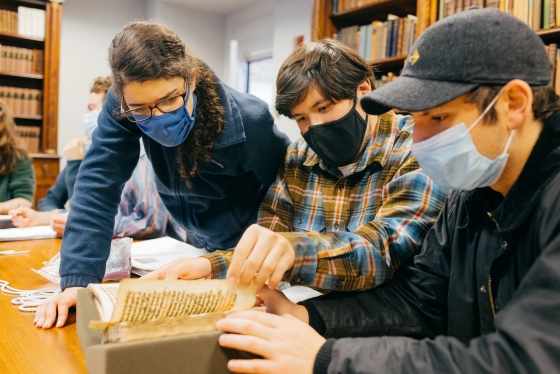