More than 1,800 degrees are conferred at Dartmouth’s Class of 2016 Commencement. 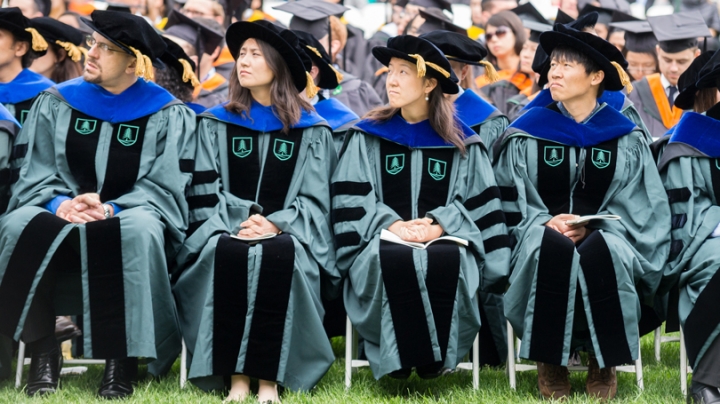 Here is Dartmouth’s 2016 commencement by the numbers: from the awarding of more than 1,800 degrees to the expected attendance of 11,500.

Undergraduate members of the Class of 2016 hail from 48 states and the District of Columbia. The most-represented states are New York, California, Massachusetts, Connecticut, and New Jersey. International students come from 31 countries. The most represented are Canada, the Republic of Korea, and India.

Most popular majors for the Class of 2016:

The most popular majors are economics, government, engineering sciences, history, and computer science.

Vandermause was selected by the faculty of the College of Arts and Sciences to deliver the valedictory to the College at the ceremony.

The Alpha of New Hampshire Chapter of Phi Beta Kappa at Dartmouth College inducted 88 undergraduates as new members in ceremonies held Saturday. The chapter also inducted as an honorary member Randall Balmer (in absentia). Balmer is the John Phillips Professor in Religion, religion department chair, and director of the Society of Fellows.

Nelson Lichtenstein ’66 was inducted as an alumni member. He is the MacArthur Foundation Chair of History and director of the Center for the Study of Work, Labor and Democracy at the University of California, Santa Barbara. Lichtenstein made brief remarks to those assembled.