Eight students and alumni have been offered grants to study and teach around the world. 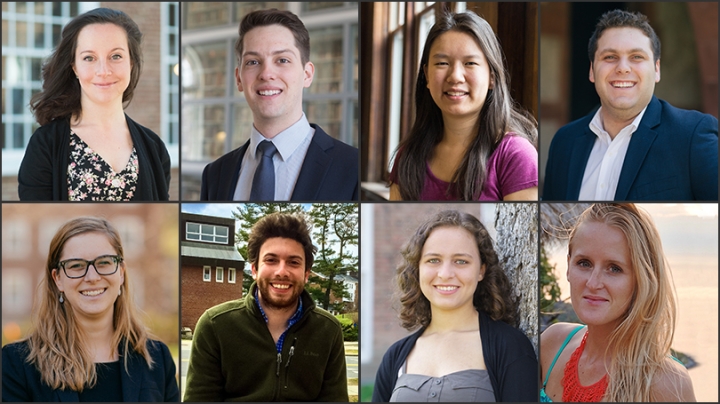 “I want to congratulate this year’s recipients, who represent a broad range of interests and talents,” says Jessica Smolin, Dartmouth’s assistant dean for scholarship advising. “I also want to encourage any student or alum who wants to learn about the incredible opportunities available through Fulbright and DAAD to contact the scholarship advising office.” To learn more about how to apply for these and other programs, visit Dartmouth’s National Scholarships/Fellowships website.
6/06/2016
Body

Every year, several graduating seniors and alumni are offered the opportunity to study and teach around the world through Fulbright and Germany’s Deutscher Akademischer Austausch Dienst (DAAD) scholarships. This year eight students and recent graduates have been offered scholarships to Colombia, Malaysia, the UK, Canada, and Germany—to teach English or study international relations, history, brain science, public health, or literature, and to serve as cultural ambassadors.

“I want to congratulate this year’s recipients, who represent a broad range of interests and talents,” says Jessica Smolin, Dartmouth’s assistant dean for scholarship advising. “I also want to encourage any student or alum who wants to learn about the incredible opportunities available through Fulbright and DAAD to contact the scholarship advising office.” To learn more about how to apply for these and other programs, visit Dartmouth’s National Scholarships/Fellowships website.

Sponsored by the U.S. government, the Fulbright Program is designed to increase mutual understanding between the people of the United States and the people of other nations through international educational exchange in more than 155 countries. Fulbright awards are available for research, graduate study, and teaching English.

DAAD, the German Academic Exchange Service, supports programs and funding for American and Canadian students, faculty, researchers, and others in higher education to study in Germany, promoting international cooperation.

The following students have been offered Fulbright or DAAD fellowships.

A Dartmouth volleyball star, Baird majored in government with a concentration in international relations and a minor in Hispanic studies, and interned at a rural health clinic in Bolivia and with the Pan American Health Organization in Washington, D.C. Following graduation, she worked on the Dartmouth Outing Club’s summer trail crew, then returned to Austin, where she worked in the communicable disease unit of the city’s health and human services department. “I got on-the-ground exposure to what tuberculosis and HIV care look like in the U.S. public health system, and a greater desire to work internationally.” For the past year, through a Princeton in Latin America fellowship, she has worked on women’s empowerment, sex education, and HIV prevention in the Dominican Republic. Offered a Fulbright to study international health at the University of Leeds, she has decided instead to accept a Rotary scholarship to complete a master’s program in infectious diseases at the London School of Hygiene and Tropical Medicine. Of the choice, she says, “I was really inspired by in the mission of Fulbright and their desire to promote cultural exchange among people from all over the world. I’m very fortunate to be in the position where I have these great opportunities.”

A government major, Beechert discovered Germany on two foreign study programs through the German department—and stayed for an off term to intern with the committee for European Union affairs at the German Bundestag. While there, he became interested in European integration, which he describes as “a huge experiment. We haven’t really seen anything like a couple of dozen countries slowly giving up much of their sovereignty and joining together for ostensibly good purposes, but not always good effect.” Through the Fulbright, he will be examining German Basic Law—“how it’s been used in arguments both for and against integration.” In addition to FSPs in Germany, Beechert participated in an exchange program with Oxford University his junior winter. A trombone player, he has played with the Dartmouth College Wind Ensemble, the Barbary Coast Jazz Ensemble, and various orchestral groups. Being offered the Fulbright “is personally validating. It’s nice to be recognized for hard work,” he says.

ByrneSim participated in a German FSP and interned at the Bundestag in the history research department. A double major in art history and history modified with German, ByrneSim plans to study photomontage and transnationalism in the 1930s. “People at the time didn’t know there was a war coming, so they thought of it very differently than we do,” she says. “We tend to think of it as mired in the Great Depression and nationalism, but if you look at publications of the period, they’re interested in international issues.” She is currently an Edward C. Lathem ’51 Fellow at Rauner Special Collections Library, where she has created a library Instagram account and teaches undergraduate class sessions with primary sources. As an undergraduate, she was a James O. Freeman Presidential Scholar, a Women in Science Project intern, received three citations for academic excellence, and graduated cum laude. Of being offered both the DAAD and Dartmouth’s Brooks fellowship (she has decided to accept the Brooks), she says, “It’s a big responsibility. It shows that people believe I’m capable of producing quality work, so I feel beholden to do that. But it’s also reassuring, because people believe in me.”

Labrador was born Huelva, Spain, and lived in nine cities around the world before coming to Hanover. At Dartmouth she has spent almost as much time off campus as on, participating in two FSPs, serving as a teaching assistant for a classics FSP in Greece, spending one off term working at a Spanish newspaper and another as an archaeology intern in Mexico, and, most recently, taking a year off to complete internships at the United Nations and the European Union before returning to Hanover to graduate. A double major in government and classical studies, she hopes to become a diplomat—one reason she applied for the Fulbright, which emphasizes cultural exchange. “The Fulbright is really a once-in-a-lifetime opportunity,” she says—in part because of the chance to be in Colombia during historic peace talks between the Colombian government and the FARC rebels. “To be there to witness this diplomatic milestone is an opportunity I couldn’t turn down,” she says. In addition to teaching English, Labrador hopes to organize an extracurricular workshop to

An Eagle Scout and the second member of his family (after his sister) to attend college, Moushey transferred to Dartmouth from the Air Force Academy because he was seeking more premed opportunities. But in an “Acting 1” elective, “I just fell in love with the humanities and the arts.” Still premed, he is now majoring in theater modified with film. He has created nearly 40 videos for The Dartmouth, collaborated on three documentaries, and helped create a video series for the College’s pre-health professions advising program. He hopes one day to bring his skills in communication and education to his medical practice. The Fulbright will be his first adventure overseas. In Malaysia, he will teach middle-school-aged children. As a secondary project, he plans to put to use his experience both as staff of the Boy Scout’s National Advanced Youth Leadership Experience and as a Dartmouth Outing Club Trip leader trainer “to teach Malaysian kids about the outdoors.” Of being offered the Fulbright, Moushey says, “It’s amazing. It’s crazy to have the honor and the award, but it’s more about the opportunity to take a year to do something that impacts the rest of my life.”

As a current Fulbright grantee in Germany, Salholz-Hillel is in the first year of a two-year master’s program at the Berlin School of Mind and Brain, where she is conducting research on the neuroscience of decision-making. As part of this international and interdisciplinary program, she has also been learning about the German academic environment and gaining insights into the mind and brain from disciplines ranging from philosophy to linguistics. Beyond the lab and the classroom, Salholz-Hillel is active in science outreach. For example, she is teaching a workshop for children on the psychology and neuroscience of choice as part of Berlin’s Brain Awareness Week. At Dartmouth, Salholz-Hillel majored in neuroscience and romance languages and was involved in research in psychological and brain sciences. She has stayed connected with Dartmouth, meeting alumni on Office of Alumni Relations travel programs, current students on study abroad, and potential students as an alumni interviewer. Salholz-Hillel has been offered a DAAD to continue her studies and research, though she has elected to accept Dartmouth’s Reynold’s Scholarship instead. She says, “I am very grateful for this support and look forward to continuing my neuroscience studies and work in Berlin.”

Tupler chose Dartmouth because it offered “small class sizes and direct access to professors. And it has exceeded my expectations.” A course on international relations with Associate Professor Darryl Press sparked his interest in international security, and with Press as his adviser he is currently working on an honors thesis assessing potential conflicts between the U.S., China, and Taiwan in the South China Sea—a paper he hopes to be able to publish. He has also served as a research assistant for Associate Professor of Government Jennifer Lind. And a small seminar with Professor David Haglund, a visiting scholar from Queen’s University in Ontario, on U.S.-Canada bilateral security relationships opened the door to his presenting a paper at an academic conference in Belgium—and helped pave the way for him to conduct his Fulbright research next year at Queen’s. Tupler will be applying asymmetric alliance theory—which is about how weaker states influence stronger allies—to post-Cold War-era conflicts. “I’m super excited,” he says. “I want to understand how the world works, and the Fulbright is the best program to go out and have direct cultural communication and exchange. It’s a tremendous honor and privilege.”

To Wang, art and literature are “necessities of life.” A double major in English and German studies, she plans to study literature and improve her German language skills at the Humboldt University of Berlin. Her interest in German stems, in part, from her love of classical music. “So many important composers have been German,” she says. At Dartmouth, Wang plays violin with the Dartmouth Symphony Orchestra, which she also co-manages. She plays piano in chamber music ensembles and especially enjoys trios and quartets with friends. “It’s a lot of fun just collaborating with other students to see how we can make the music work,” she says. She is part of Humbug, a Dartmouth creative writing discussion workshop that publishes student work, and has contributed to the literary journal Mouth. “It’s fun to share writing with peers and have peers edit your work,” she says. Of being offered both the DAAD and Dartmouth’s Reynolds scholarship (she is still deciding which to accept), she says, “It’s an immense privilege to have this opportunity to study abroad for such an extended time. I feel like after graduation is the moment to really catapult myself into a new environment.”