Dam removal in New England is not only an important aspect of river restoration but also provides an opportunity to enhance the magnitude and rate of river re-connection, and improve watershed resilience in response to human impact on the environment, if a broader strategic removal approach is implemented throughout the region, according to a new Dartmouth-led study published in Elementa: Science of the Anthropocene. (The study is available for free online through this open access journal).

The study is the first interdisciplinary, region-wide assessment of the social and biophysical impacts of dam removal and was conducted by researchers at Dartmouth, American Rivers and the USDA Forest Service.

“These results not only reveal what has been achieved so far for river management in New England but they also indicate what can possibly be attained to restore broader ecological functioning in regional aquatic ecosystems,” says lead author Francis J. Magilligan, a professor of geography at Dartmouth. “New England remains a dammed landscape but the approaches developed in this research can help further guide river restoration efforts regionally.”

Over 14,000 dams dot the New England landscape due to the region’s early European settlement and history of water-powered based industry production. Yet, with aging infrastructure, risks and costs associated with safety and maintenance, and environmental concerns, there has been an increasing trend for the removal of dams throughout New England as part of local river restoration efforts and conservation strategies.

To examine the impact of the removal of dams in New England, researchers created a geographic information system (GIS) database to compare the number of existing dams irrespective of size or volume with ones that were removed over the past nearly 25 years. The study found that the region has over 14,000 dams, which well surpassed the U.S. Army Corps of Engineer’s National Inventory of Dams (NID) total of 4,000 dams. The latter did not reflect many of the region’s small mill dams, which did not meet the height and reservoir volume requirements for the NID’s dataset. With nearly eight dams per 100 km² in New England, most of the dams in the region are located in Conn., Maine, Mass., and New Hampshire, with very few in Rhode Island and Vermont. The dams often obstruct other types of watershed areas that contain orphaned mill dams, small headwater supply dams and larger hydropower facilities.

Between 1990 and 2013, 127 dams or approximately 12 per year were removed in New England, which accounts for nearly one-fifth of the more than 60 dams removed nationally. Most of the dams removed in New England or 78 percent in total are located in eco-regions that are far inland (40 percent in the Northeastern Coastal Zone and 38 percent in the Northern Highlands); therefore, many of the river areas where dam removal has occurred remain disconnected from the ocean even after the removal process due to the existence of dams downstream.

If closely spaced dams however, are removed, more free flowing river length in a specific area will open up, which can allow for continuous fish passage and the enhancement of sediment connectivity that can in turn facilitate the development of fluvial habitats (bars, banks and floodplains) located downstream.

New England has approximately 104,000 km of total river length and as a result of dam removals, 3,770 km or 3.61 percent of the regional river network has been reclaimed with the majority of dam removals in Maine. 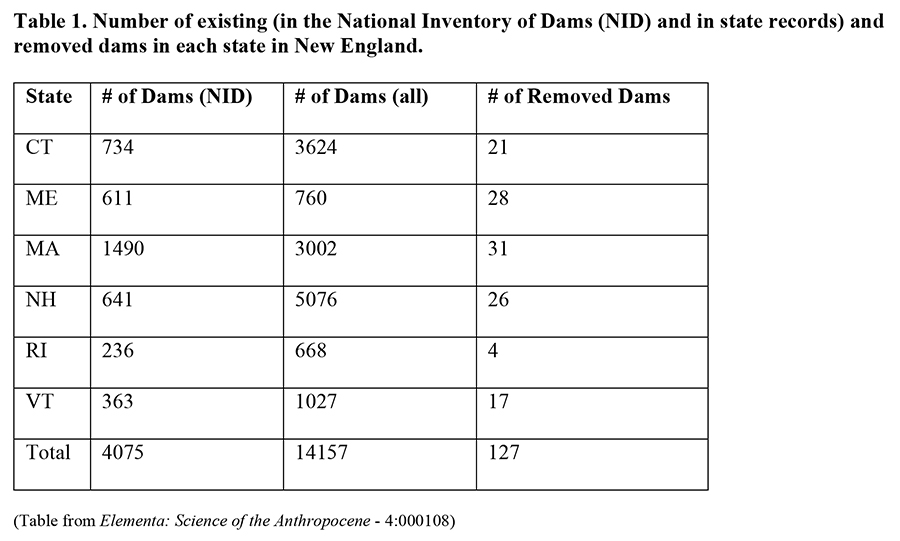 While the removal of dams can re-establish free flowing river areas, the specific location of where a dam is removed is key. If other dams are still located up or downstream, diadromous fish (i.e. fish that spend their time in salt and freshwater such as Atlantic salmon) will not be able to access the newly restored habitat. As temperatures rise and global warming continues, predictions have indicated that salmon, trout and other native coldwater-dependent species may seek coldwater refuge upstream due to downstream warming, providing a benefit of dam removal in upper catchments. Dam removal in the upper catchments of New England’s rivers provides an opportunity to capitalize on the restoration of forest cover to pre-settlement levels and water quality improvements that the region has experience over the last century, as the removal of dams may also provide access to high quality and resilient habitats.

With the use of new geospatial databases and associated spatial algorithms, stakeholders can identify which dams may liberate the most free-flowing river and prioritize the areas for watershed or river restoration. In New England, watershed restoration and watershed resilience in response to regional and global anthropogenic changes is much more likely to be achieved, if dams are removed strategically on a large scale within the region.

Francis J. Magilligan is available for comment at: francis.j.magilligan@dartmouth.edu.

The study is part of a broader project, funded by the National Science Foundation, to examine the biophysical and social dimensions of dam removal in New England led by Dartmouth geographers Christopher S. Sneddon, Francis J. Magilligan and Coleen Fox.