From the Office of Entrepreneurship and Technology Transfer, the two are embarking on new ventures. 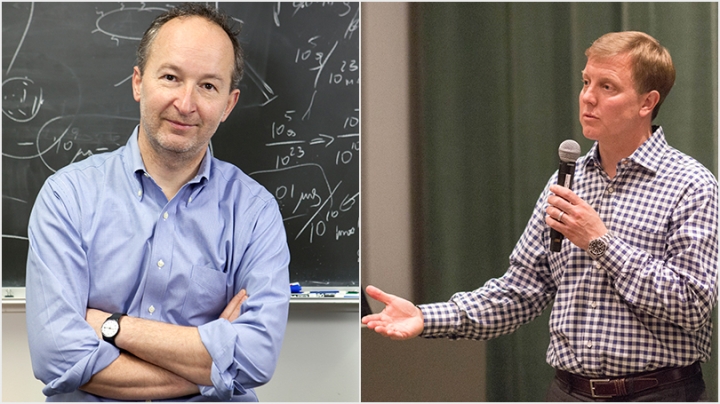 In addition to his teaching and research, Tillman Gerngross has co-founded a number of biotechnology-related ventures. Trip Davis ’90, a technology entrepreneur who has served as the OETT’s executive director, will return to work as an entrepreneur, joining FreshAir Sensor LLC, a Lebanon, N.H.-based company founded by Professor of Chemistry Joseph BelBruno and Jack O’Toole, Tuck ’14. Davis will also serve in a new part-time post as entrepreneur-in-residence (EIR) at the College.
6/09/2016
Body

Gerngross, a professor of engineering at Thayer School of Engineering, will turn his attention to his biotechnology start-ups and to teaching and research after spending three years as the associate provost for the Office of Entrepreneurship and Technology Transfer (OETT).

Davis, a technology entrepreneur who has served as the OETT’s executive director, will return to work as an entrepreneur, joining FreshAir Sensor LLC, a Lebanon, N.H.-based company founded by Professor of Chemistry Joseph BelBruno and Jack O’Toole, Tuck ’14. Davis will also serve in a new part-time post as entrepreneur-in-residence (EIR) at the College.

“Tillman and Trip have put Dartmouth on the entrepreneurship map with their work developing the OETT, including creation of the popular and very successful DEN Innovation Center,” says Provost Carolyn Dever. “Thanks to their hard work, creative thinking, and commitment to experiential learning, the College has serious momentum in this competitive space and is poised to build on their success.”

The innovation center is a popular gathering spot for student-entrepreneurs. It offers activities and programs on campus as well as forums across the country. Since its launch, the center has created co-curricular educational and funding programs, worked with more than 3,000 participants, and funded more than 60 venture ideas.

Under their leadership, Tillman and Davis boosted the College’s commitment to promoting entrepreneurship and supporting technology transfer from academic research to the private sector for the benefit of the public. In March, the two led the way in establishing a new intellectual property policy and a policy on acceptance of equity that lowers barriers and strengthens support for Dartmouth faculty launching entrepreneurial efforts. It also increases faculty members’ control of their inventions.

“We wanted to support our faculty and students to have a real impact in the world,” says Gerngross. “We’ve charted new territory in the practice of entrepreneurship and technology transfer and helped to position Dartmouth as a true leader.”

In addition to his teaching and research, Gerngross has co-founded a number of biotechnology-related ventures, including GlycoFi, which was acquired by Merck in 2006. The same year, the journal Nature Biotechnology named Gerngross one of the most notable people in biotechnology of the past decade. Since selling GlycoFi, Gerngross co-founded Adimab, Alector, Arsanis, and, most recently, Avitide with his former student Kevin Isett, Thayer PhD ’11. He has been an advocate for policy changes that empower the individual entrepreneur and facilitate the transfer of discoveries from the laboratory to the real world.

Says Davis, “We’ve worked through a thoughtful growth plan—people, places, programs, and policies—to develop entrepreneurship and technology transfer as cross-campus enablers for aspiring entrepreneurs. I look forward to continuing my efforts in the new EIR role as a sounding board for alums, faculty, and students.”

Davis came to Dartmouth from the University of Virginia, where he had served as president of the Darden School Foundation and senior associate dean for external relations at the university’s Darden School of Business, where he earned his MBA in 1994. He also served as an adjunct professor of entrepreneurship and co-faculty director of the Galant Center for Entrepreneurship at the McIntire School of Commerce from 2007 to 2011. Previously, Davis was an entrepreneur and executive in travel technology and was named one of the top 25 most influential executives in the travel industry in 2002 and 2007 by Business Travel News. Davis co-founded his first venture in 1995 in the San Francisco Bay Area with Dartmouth classmates Eric Butz ’90 and Greg Waldbaum ’90.

In the next several months, the College will determine how best to structure the OETT to continue to support technology transfer and entrepreneurship at Dartmouth.